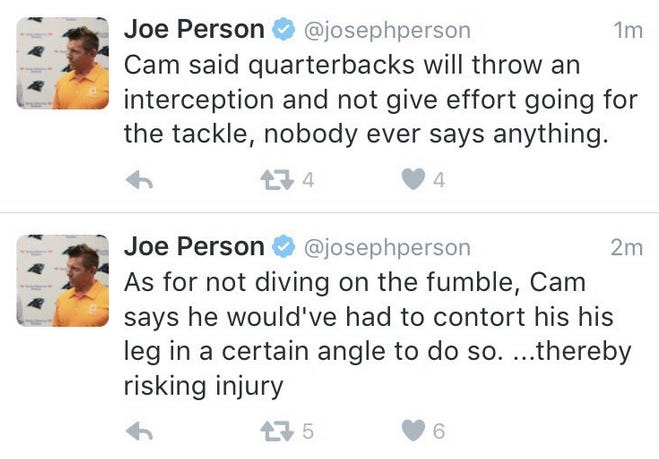 Welp, just like I said: anyone who thinks Cam was trying to pick the ball up and make a play is an idiot.

In all seriousness, I was wrong. I was very wrong. I’ll own that. I thought it was IMPOSSIBLE that a professional athlete who’s played a brutal game for most of his life thought, “I might get an ouchie soooo no” in the Super Bowl. Fuck, I still think that’s impossible. It’s legitimately blowing my mind that any quarterback, let alone one built like a linebacker, would refrain from diving on a ball because there was risk of injury to his leg. With the Super Bowl on the line. It’s crazy.

The most ridiculous part? Admitting it. If you were too terrified to try and recover the ball, at least say you were trying to pick it up. At least say you were doing what you thought was best for the team. You’re not in a confessional and you’re not under oath, coming clean and saying that you were more concerned with maybe getting a boo boo rather than preventing a game-ending play is bonkos. And that interception comparison? I’ll admit you’re spot on, Cam. If it’s week 4. If it’s the Super Bowl and a QB is all that’s standing between a cornerback and the endzone, he would get crucified for turning away.

The whole thing is preposterous to me, both the fact that he was actually scared and the fact he admitted it. I’m truly baffled. All I do know is that thank god Tom Brady is my quarterback. You take you 6’5, 250 pound athletic specimen, I’ll take the guy with the fire in his belly who’s gonna win or die trying.