HelloU – Thanks to YouTubers Bria and Chrissy, we’ve seen gay men touch a vagina for the first time, and we know what happens when lesbians first get their hands on a penis.

We’ve seen grown men attempt to watch a circumcision, and, earlier this week, we even watched some gay men eating a cow’s vagina [ED. NOTE: I spared you guys from blogging either of these, no need to thank me].

Now, in their latest video, Bria and Chrissy have rounded up some straight men, willing to touch another man’s penis.

The thing that strikes me as interesting with these YouTube videos…usually YouTube people are pretty fucking desperate for views. There are so many YouTube channels and “aspiring” YouTube channels out there that if they’re ever fortunate enough to get something to go viral, they immediately drive different versions of that concept into the ground because that’s all people want to see from them (and they might not be creative enough to do something different). That’s why you get endless “___ reacts” videos or the EpicMealTime dudes stuck making different permutations of unhealthy food items endlessly. It works, why change it. Small problem: There’s really only so much you can do with the “people of different sexualities touch genitals they’re not used to” before you end up with scenarios of straight guys somehow getting roped into touching another dude’s dick. And while most of me thinks this is just them seeing the huge views they got on the other videos and not being clever enough to think of new ways to build on that, I get a different sense looking at this guy’s face: 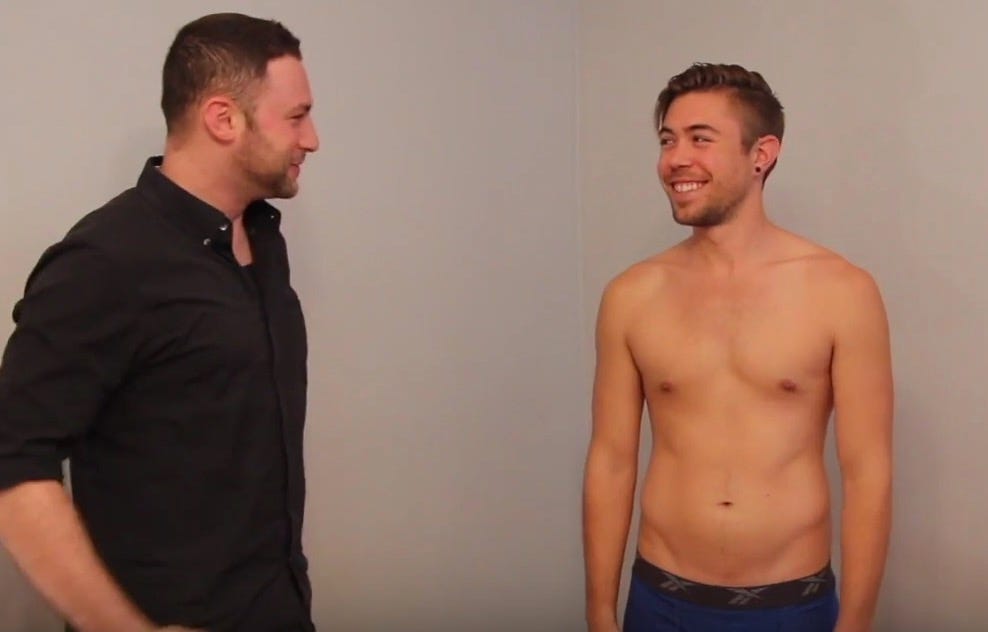 And like…isn’t this the dream for him? He says he’s a gay guy and now he gets the definitely porn-sounding scenario of some straight dudes coming in and having to touch his dick while he says stuff like “This is totally not porn.” But gay guys are still men, it’s not like women where they can just shut a pussy off for the sake of science or sexual indifference. I’m not sure if this YouTube channel is just so desperate to keep beating the dead horse or if it’s now just a front for some colorful setups for them to seduce random people into sex. Because otherwise what’s the point here? I know what grabbing a dick feels like because I’m pretty in touch with mine on a regular basis, not many new findings are popping up just because you’re grabbing one on another dude’s body. You’ve got to at least be breaking out a dick of a different race or copious amount of foreskin here for this to even be a worthwhile experiment. I guess I’m just skeptical of the hypotheses my viral homoerotic dick touching YouTube videos are trying to prove these days.