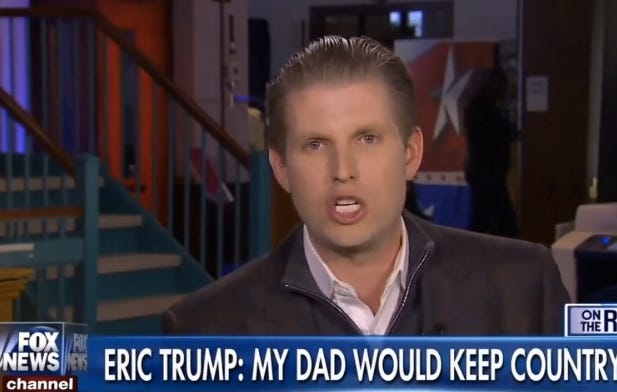 Mediaite – Donald Trump’s son, Eric Trump, appeared on Fox’s On the Record Monday night to explain that waterboarding not only wasn’t torture — it was basically tantamount to frat house shenanigans.

Greta Van Susteren asked Eric Trump to elaborate on his father’s assertion that he would do worse than waterboarding. He explained:

You see these terrorists that are flying planes into buildings, right? You see our cities getting shot up in California. You see Paris getting shot up. And then somebody complains when a terrorist gets waterboarded, which quite frankly is no different than what happens on college campuses and frat houses every day. And, you know, the man would keep this country safe. There is no question about it.

The Trump Show rolling on FULL. SPEED. AHEAD. 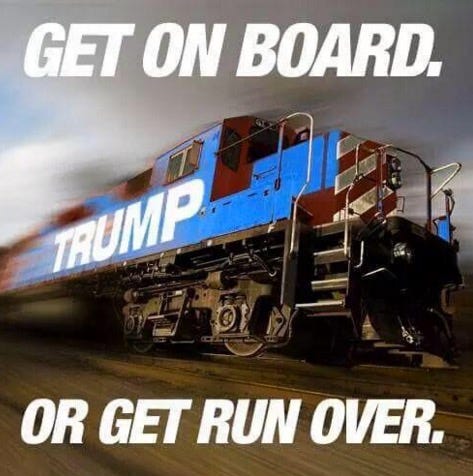 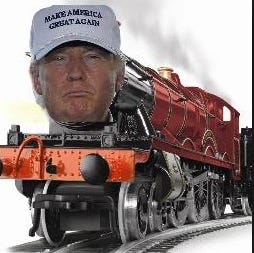 Oh you thought they were done after losing Iowa? You thought they’d just pack their shit and head back to the penthouse of the Trump Tower to sulk and sip chocolate milk like the last Republican loser? Ha. Not even close. Need to ramp it up. Need more soundbites. Need more tough talk. Forget any sort of decorum whatsoever and just start calling other candidates pussies. Anybody who doesn’t get waterboarded is a pussy.

In fact Donald Trump is going to get waterboarded as he’s sworn in to the Presidency, just to show all our enemies who they’re dealing with now. Put one hand on the Bible, lay down on a piece of plywood, and just get his ass drowned while reciting the Oath of Office. See how tough ISIS’s bitch ass acts then.

And for the record, Eric Trump is dead on. I think I can speak for every fraternity, at least in the South when I say that getting waterboarded is day 1 stuff. You get so used to it you barely even mind it anymore, in fact you kind of look forward to it, get a little bit of a waterboard-high right before the Pimps and Hos or Golf Pros and Tennis Hos party kicks off. It’s the torture in the dungeons you have to worry about. Picture Hostel but a little bit more intense. That’s what we had to do to have friends.