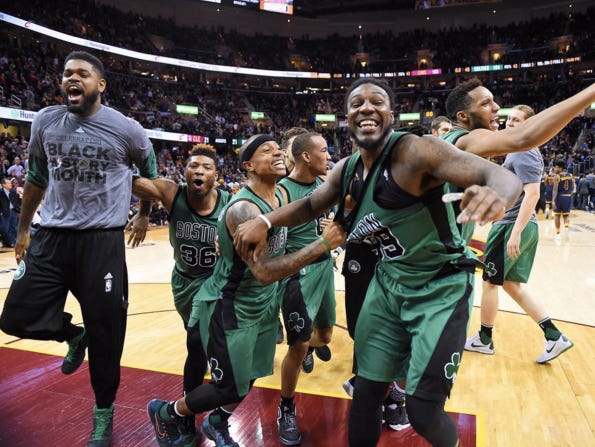 Hours later, the smile is still present. My heart, still racing. We’ve gone down to a half chub, but we are at an all time Celtics high right now and boy let me tell you it..is..FIRE. If we’re being honest, I may have had a little morning session with that fourth quarter to get me in the right mindset to write this. For a game that won’t matter in a week, I can’t remember a bigger win for this group. I’d be lying if I said I didn’t feel some sort of validation after Avery made that shot. As Celtics fans I think we all did. I completely understand how far this team is from a championship, but this game proved to me that what I’ve been preaching all season isn’t just hot air. I understand that regular season games don’t matter. But playing Lebron will ALWAYS matter.

It’s sort of weird, the Celtics relationship with Lebron share a lot of similarities to the Brady/Manning rivalry. Early in his career, Lebron couldn’t get past the Celts. They owned him. But slowly the tide started to turn, and there is no denying it, ever since that Game 6 in 2012, the Celtics have struggled against Lebron. This team especially. So when you pull off a win like the Celtics did last night, it means something. I don’t think it suddenly makes them the favorite in the East or anything, but it shows you that you are making progress. I think Brad put it perfectly

“In the big picture it does count as one (win), but it gives you a sense you’re improving and getting better,” Stevens said. “For us it would have been disappointing to lose that lead and not come out with a win. They made huge plays late in the game, but our guys stayed poised. To score five points inside 8 seconds is a good deal.”

Like everyone else, when I saw that shot go in, I couldn’t believe it. The more I thought about it the more I really should have expected it. See, we’ve seen this before from the Celts. In fact, all within the last 3 or so weeks, we’ve seen a quarter ending shot go in five times.

First came the make on Jan 16th against Washington

Then it happened again on Jan 27th against Denver

Then Jan 29th against Orlando

Then January 31st against Orlando

And Then again on Feb 2nd against the Knicks

And finally last night. I brought it up at the time but seeing them make those plays reassured me that they would be comfortable with the game on the line. Avery looked pretty comfortable to me.

– We really can’t start any other way. I watched this maybe 1000 times last night. “We can’t blame the refs” made me lol every time. GIVE ME YOUR TEARS

– Best player on the floor for the Celts last night was without a doubt Evan Turner. He had an interesting night, filled with both highs and lows. Or basically a perfect Turner game. It felt like he was struggling a bit with his midrange jumper during stretches, and he wasn’t getting a call when he took it to the basket. Despite this, putting up 19/12/6 on 8-16 shooting on the road is more than I could ask for. Along with Isaiah, Turner was absolutely huge in the fourth quarter (13/7) and down the stretch. His layup with 4 seconds left basically enabled them to win the game, even if JR Smith committed the worst foul of all time.

Defensively, he was solid. He made Lebron work, did a pretty good job moving his feet, and even did this

LeBron James thought he had an easy look at the rim… Evan Turner thought differently: pic.twitter.com/tHrDZSOAGL

- Equally imressive was Tyler Zeller. Given his recent play, it’s weird that he fell out of the rotation. He succeeded in the pick and roll, and is able to extend out to the 15-18ft. He has his limitations, but he had the most minutes of any big man in the fourth quarter, so clearly Stevens trusts him

– We’ve talked about this in prior wins, but last night might have been the greatest example. This team is so fucking resilient. They don’t quit. Ever. They just come at you, and come at you and come at you. Sure their offense might stall, but they compete and that’s why they are in every game they play. Just look at how this game started, probably the worst case scenario. Down 14-2 just four minutes into the game. It would take the Celtics until 10:40 minutes in the third quarter to regain the lead, and by the end of it they trailed again by 8. Normally a team would be deflated in this situation. To fight all the way back, and then blow it all away heading into the final frame is brutal.

Instead, the Celtics fought. The Celts would climb back to a seven point lead with 4 minutes left, and I think they started to relax. All the sudden, they found themselves down 101-96 with 18 seconds left. We all know what happened next. If that doesn’t show you a resilient team, against the best team in the conference, in their building, then you need to open your fucking eyes. Sure the Celtics don’t have the best talent in the league, or really anywhere close, but when a team refuses to quit, you’d be surprised what that makes up for talent wise.

– I’m a firm believer that the Celts were able to make this comeback because they addressed two areas that Cleveland has been known to dominate whenever they play. They won the rebounding battle (49-47) and points in the paint (48-38). If you remember, the Mozgov/Thompson duo always gives the Celts trouble in creating second chance shots and that’s usually the difference.

And finally, the Avery make. You know you want to see it again

Hearing the Gorman call sent chills down my spine. It’s the Mike Breen “For three…BANG!” call before that was even a thing. Hearing that little man burst with excitement will never ever ever get old

– I talk a lot about how Marcus Smart always seems to make winning plays. Sure it’s frustrating when he keeps missing those floaters, but he is one of the main reasons why the Celts are competitive. Whether it was the brilliant move to draw that offensive foul on Lebron late in the third, or crashing the rebound on the missed FT at the end that saved the day, we got a glimpse of what makes Smart such a valuable player. And again, he’s just 21.

– Huge shouts to Jae Crowder for gutting this game out. After admitting that he wouldn’t have played if the game was against anyone else, you could see his struggles right off the bat. He seemed to reinjure himself on a drive early in the first quarter, and anytime you have a leg injury, your shot is going to struggle. Which his did. But he battled, and I found it fitting that his only make was that gigantic three. Let’s just hope this isn’t something that turns out to be a lingering issue.

– Isaiah, even though he was fouled about 50x more than what was actually called, thank you for making all of your FTs. You kept your emotions in check, and you matched Kyrie Irving’s production. Thank you.

– I loved how easily Lebron was baited into shooting 3s. He is such a mental midget. You are the biggest freak of nature on the planet, and you are settling for 26ft jumpers. Some things never change.

– I think it really shows the difference in talent when it seems to take a ridiculous amount of effort just to score a bucket, finally get the lead, and it’s gone in about 30 seconds. That was annoying.

– Sully missing those FTs was such a kick in the dick. It gave the Cavs all the momentum they needed to come back at the time, and he was just tired, you could tell.

– I know its annoying, and it had zero outcome as to why the Celtics were struggling throughout this game, but the refs were brutal. It shouldn’t come as a surprise, the Celts have dealt with Lebron treatment for many years. Especially IN Cleveland. It was just shocking to me that every 50/50 call seemed to be Cleveland’s ball. It did seem like whistles were swallowed on one end of the court, and if you watched the end of this game, you saw Lebron FT practice.

It was funny to see them get exposed on that made Lebron three that shouldn’t have counted. Initially they counted it, shocker, and then had to reverse it once people actually called them out on it. Nice try.

– Whatever they thought they were doing to start this game. What absolutely pathetic efforts on both ends of the court. They were sloppy with the ball (8 turnovers) in that first quarter, and in all honesty, they should have been blown out. They played nervous, and you could tell they were just not mentally prepared. One thing went wrong, and the house of cards collapsed. Fortunately they were able to snap out of it, but this was brutal to watch early.

– Since there is no way Brad Stevens fucks up an ATO play, I am going to go ahead and assume Evan Turner just took it upon himself to shoot that three with 1:27 left. Talk about wave of emotions.

Now let me save you the trouble. Did Kevin Love being out have anything to do with what happened? I’m ready to say that this win doesn’t happen if he doesn’t gets hurt. Oh well, why is it my fault he’s a pussy who can’t play with a thigh bruise? I got Jae Crowder walking on one leg trying to guard Lebron, you don’t think that mattered? I said before the game that things don’t change much one way or the other based on this game, and that’s true. The Celtics are still tied for the 3 seed with Atlanta, and Cleveland is still the best team in the Conference.

What has changed I think though, is the perception of this team. Or at least it should. I’m not sure who else they need to beat to finally be considered a legit contender in the East. Again, in the long run this game won’t mean much, but at the moment, it means everything to us Celtics fans. Finally, after many failed attempts, we finally got to enjoy Lebron’s tears.