Full broadcast, with commercials and halftime show, if you are into that kind of thing

After Charlie blogged about the greatest Super Bowl of all-time on its eight year anniversary, I figured I should do the same for the rematch on its four year anniversary. It definitely didn’t have the same drama as Super Bowl XLII, but it was still an exciting game and the Mario Manningham catch is an all-timer.

The craziest thing about this game is that it was ONLY four years ago. You have Aaron Hernandez, Chad Ochocinco, and Danny Woodhead playing for the Pats. Hakeem Nicks and Victor Cruz both healthy and playing like studs. Ramses Barden ready to be the next Plax “if he can just get it together” (we were so dumb). That’s the craziest shit about the NFL. Things change soooo quickly.

And it’s great to relive some great moments after what was a rough year for Giants fans. Big Blue seemingly set the record for most heartbreakers in a season, our two-time Super Bowl head coach resigned, and Justin Tuck retired. So enjoy the video above and remember when we had a pass rush of Tuck, Osi, and JPP with 10 digits. Or having Trel and Kenny Phillips making plays at safety. And of course, this crazy motherfucker as our punter. 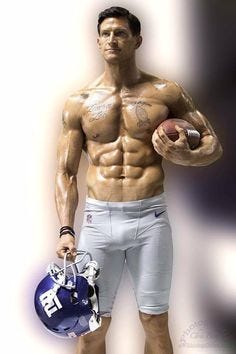 I also forgot that Madonna was the halftime show that year.  WOOF!