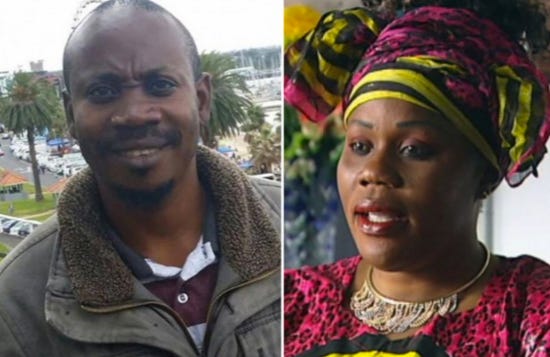 WaPo - Noela Rukundo sat in a car outside her home, watching as the last few mourners filed out. They were leaving a funeral — her funeral. Finally, she spotted the man she’d been waiting for. She stepped out of her car, and her husband put his hands on his head in horror. “Is it my eyes?” she recalled him saying. “Is it a ghost?” “Surprise! I’m still alive!” she replied.

Far from being elated, the man looked terrified. Five days earlier, he had ordered a team of hit men to kill Rukundo, his partner of 10 years. And they did — well, they told him they did. They even got him to pay an extra few thousand dollars for carrying out the crime. Now here was his wife, standing before him. In an interview with the BBC on Thursday, Rukundo recalled how he touched her shoulder to find it unnervingly solid. He jumped. Then he started screaming. “I’m sorry for everything,” he wailed. But it was far too late for apologies; Rukundo called the police. The husband, Balenga Kalala, ultimately pleaded guilty and was sentenced to nine years in prison for incitement to murder, according to the Australian Broadcasting Corp. (the ABC).

Ballsiest woman OF ALL TIME. Her husband just ordered a hit team to kill her, and instead of playing it safe, staying as far away from him as possible, she shows up at her own funeral, like surprise motherfucker! Bitch, he just paid to have you murdered, what are you doing!? God dammit woman, will you ever learn?

How did she pull it off? Well, her husband hired the worst hitmen in the history of the world:

WaPo - Here is how she pulled it off.

But the minute Rukundo stepped out of her hotel, a man charged forward, pointing a gun right at her.

“Don’t scream,” she recalled him saying. “If you start screaming, I will shoot you. They’re going to catch me, but you? You will already be dead.”

Rukundo, terrified, did as she was told. She was ushered into a car and blindfolded so she couldn’t see where she was being taken. After 30 or 40 minutes, the car came to a stop, and Rukundo was pushed into a building and tied to a chair.

She could hear male voices, she told the ABC. One asked her, “You woman, what did you do for this man to pay us to kill you?”

“What are you talking about?” Rukundo demanded.

“Balenga sent us to kill you.”

They were lying. She told them so. And they laughed.

There was the sound of a dial tone, and a male voice coming through a speakerphone. It was her husband’s voice.

They weren’t going to kill her, the men then explained — they didn’t believe in killing women, and they knew her brother. But they would keep her husband’s money and tell him that she was dead. After two days, they set her free on the side of a road, but not before giving her a cellphone, recordings of their phone conversations with Kalala, and receipts for the $7,000 in Australian dollars they allegedly received in payment, according to Australia’s The Age.

So her husband legitimately hired hitmen who wouldn’t kill a woman. Ummm, maybe they should have put that in their classified ad? Maybe a bullet point on the ol’ resume? Something like “dependable, kills in high pressure situation, won’t kill a woman though”. What kind of hitman has all these morals? Pretty commendable, I suppose. Gotta draw the line somewhere. Pretty ridiculous though, how are they ever going to get a job in the world of the hitmen ever again? Word will spread through the pay-for-murder community that they stole the money and didn’t finish the job. They might actually be worse than the husband if you think about it. They accepted money for a job and straight up stole it. They should have politely declined and perhaps recommended a team of guys that weren’t too pussy to kill a woman. Yep, for sure worse than the husband.