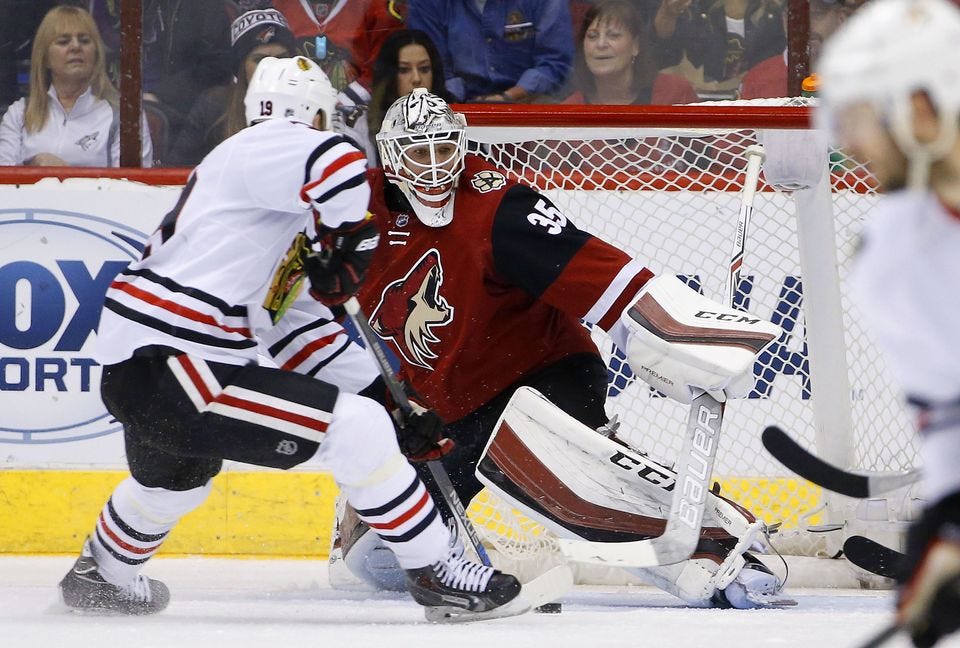 One of the better games of the year from an entertainment and blogging perspective. There was a level of chippiness, some great highlight goals by the Hawks, and Coach Q lost his mind. Last night was peak Joel Quenneville.

Started with the disallowed Marian Hossa goal that was complete bullshit. Coach Q didn’t like the call either.

Things got worse when the Coyotes scored like 2 minutes later

Come here, I just want to talk, I won’t kill you I promise

The best Coach Q moment since the playoffs vs St Louis a couple years ago.

All is well that ends well though and the Hawks got two points last night.

–Eventually, Hossa got a goal last night. That’s his career 495th. There’s been a debate in the past about whether or not Hossa is a Hall Of Famer, and I never really understood the people who say he isn’t. 500 goals is pretty much a golden ticket to the Hall Of Fame historically, he’s also one of the best defensive wingers of this generation, and oh yeah…three Stanley Cups.

He also set Toews up for this shorty

–Toews also got the game winner in OT

Toews now leads the league in Game winning goals with 8 and he has tied the regular record for OT goals in a season with 5. Obviously that record is going to look different going forward because of 3 on 3, but so far this year Toews is the best OT player in the league.

–Kane keeps scoring too. Now has a career high 31 goals.

The Blackhawks have everything rolling right now. Top 10 in goals for, top 10 in goals against, top 10 power-play, and a top 10 PK. It’ll be interesting to see what Stan Bowman does at the deadline. He’s normally not a guy that makes a big splash aside from last year when the Hawks knew they were Cup-Or-Bust because of the Salary Cap doom coming in the summer, and the extra cash they had laying around because Kane was on LTIR. I would love to add Ladd or Byfuglien, but it’s more likely that Stan will just tweak the roster a bit. I want Dale Weise from Montreal and Kris Russell from Calgary. Depth guy rentals because the Hawks don’t need to open the vault to win with this group. At the end of the day though…I don’t really care. #InStanWeTrust, #DynastyReign