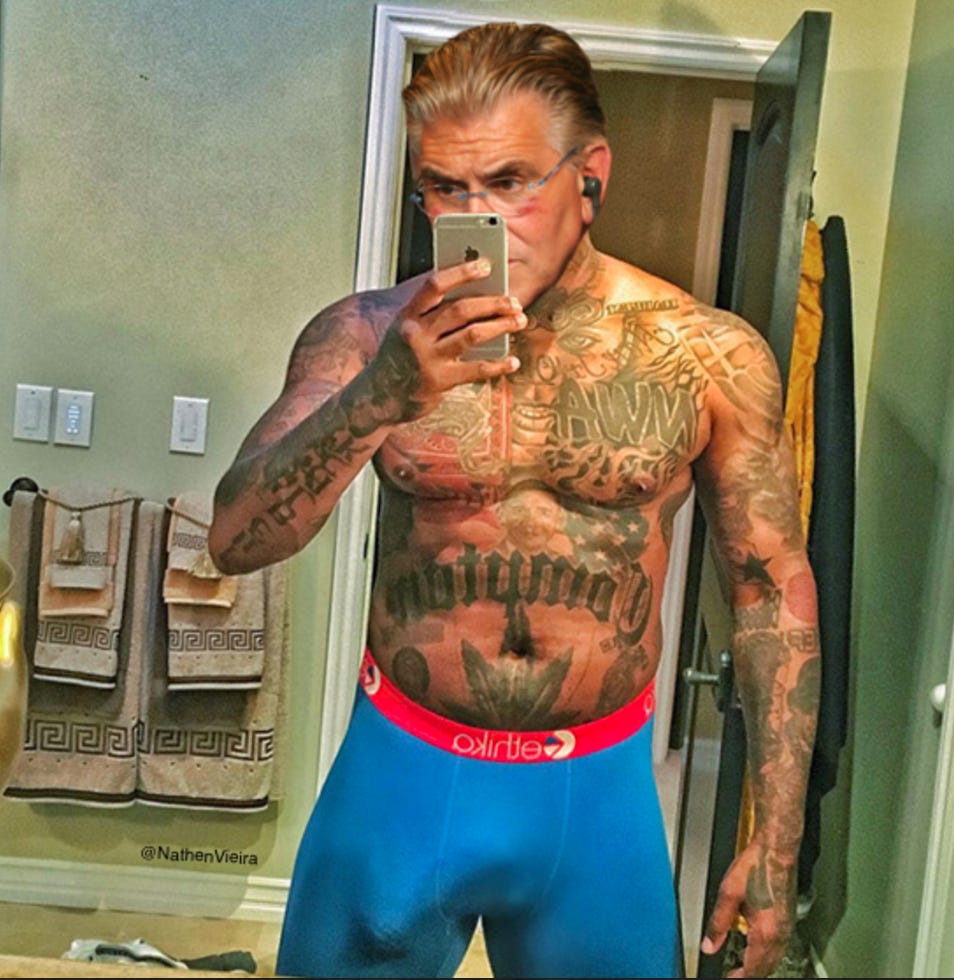 Every now and then there comes a moment, as a blogger, where the world stops spinning for a minute. A moment that comes along that makes it all worth it. A moment that kind of reminds you that you are needed in this world. It gives you purpose and lets you know you’re important and necessary.

Last night around 6pm one of those stories came a long. Deadspin breaks a story that Mike Francesa has a huge dick that belongs in porn and all the sudden my self worth sky rockets. This is why I exist. This is why Mongo Nation exists. Something like this happens, and all the sudden we’re on the clock. Its like when you’re a firefighter and get the call that theres a 4 alarm blaze. Its like when you’re Batman and you see the Bat Signal in the sky above Gotham. Out of nowhere its time for you to go to work.

There are plenty of guys that write about Mike. But not like this. Not these stories. There are guys that will write about Mike’s ratings or performance like Richard Deitsch or Neil Best. They do a great job. There are old cranky cocksuckers like Mushnick that will pen columns critiquing Mike for his technical performance. But there’s this beautiful, magnificent story about Mike Francesa’s hammer cock that floats in limbo, way at the bottom of society that only a couple people are scummy enough to take on. The greatest sports radio host of all time…the cocky hefty Italian guy who’s worth bazillions but sometimes acts so oblivious you’re laughing right at him…the guy who provides more unintentional humor than anyone alive…is packing a porn star penis. Wow. Just wow. Without guys like me, this hilarious, unexpected, patently ridiculous bombshell doesnt get its proper due. It doesnt get the write up it deserves.

Approximately 6pm, February 4th, 2016 Twitter catches wind of Jay Glazer saying he was a “bathroom escort,” whatever the fuck that is, and that he peeked at Francesa’s dick at the urinal, and as soon as the jokes and hashtags start flying, its almost like the previous 25 years of Francesa all comes to a head. Its like all the things Mike has been saying and doing for the past 2 and a half decades were because he knew this day would come. “Youah bettah bring moah than a peashootah.” “It was the most magnificent hawse, I have ever seen.” “Cawk. Who wants cawk!” “I’m a Picasso with the Snow Blowah.” “He rode me for noyne innings that night…he let me have it.” All the sudden, all these things have new meaning. Its like in Interstellar when Matthew McConaughey is inside the bookcase at the end of the movie. And you realize that all the the things that were happening for his daughter’s entire childhood was him trying to drop hints about the future. Mike has sat at that desk in Blue Heaven, in that chair, for 25 yeahs, trying to let us know that he was swinging like a grandfather clock. Just waiting for the day we’d put the pieces together and realize the truth. And now that we’ve put the pieces of the puzzle together – just like Murph in Interstellar – we can fully see the picture clearly now. For years now we’ve been making vines and videos and mashups and memes and photoshop every time Mike said something that sounded sexual. What we thought were Freudian slip ups and subliminal sexual innuendo. Mike Francesa has been saying those things on purpose his entire career waiting for the audiences to crack the case and discover his porn star package.

Of course Mike Francesa has an enormous dick. There’s only one way you get to the position hes in, only one way you act as confident and cocky as he does, and only one way you can get away with the bullshit he gets away with…and thats to have a hammercock stacked between your legs. The only way you can be this arrogant and cocksure is when you’re completely sure of your cock. Every caller, every guest, every interviewer, every adversary, have all been dominated because he’s got the ultimate confidence booster backing him up – a full living breathing rooster in his underpants. You know the only way a guy can FALL ASLEEP on the air and get away with it? The only way a guy can get away with watching TV while doing a radio show that his audience cant see? The only way he can broadcast himself just countint numbers out loud? When he walks into the meeting the next day with his bosses and doesnt give a fuck because at the end of the day, no matter what happens at work, he’s taking his Loch Ness Monster home with him. Talking sports and think Al Albuquerque is a fake person? Doesnt matter. I’m Mike Francesa. King Kong’s dick aint got shit on me. There’s only one way to deal with tens of thousands of idiot callers, only one way to deal with everyone throwing rocks at the throne, only one way to manage the biggest loudest city on earth, and still end up with a full head of hair, a thousand watt smile from ear to ear, and a bankroll that would make some of the athletes you interview blush. And thats by having a huge, huge dick.

Now cue the motherfuckin music and hit the best of #ZaunPornTitles 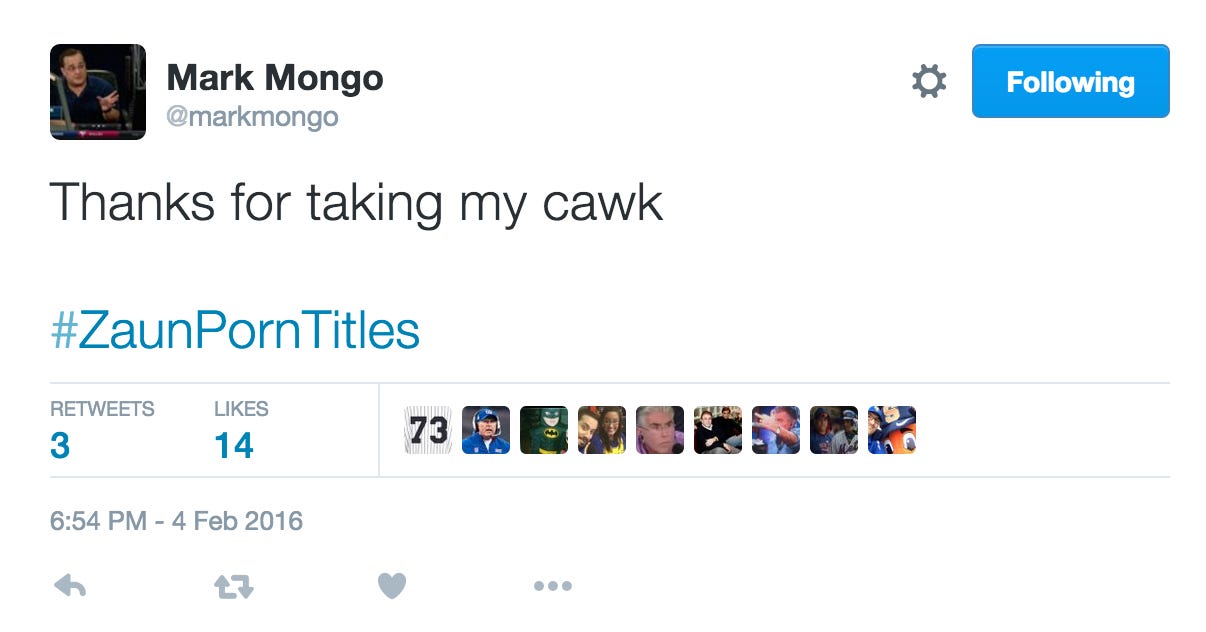 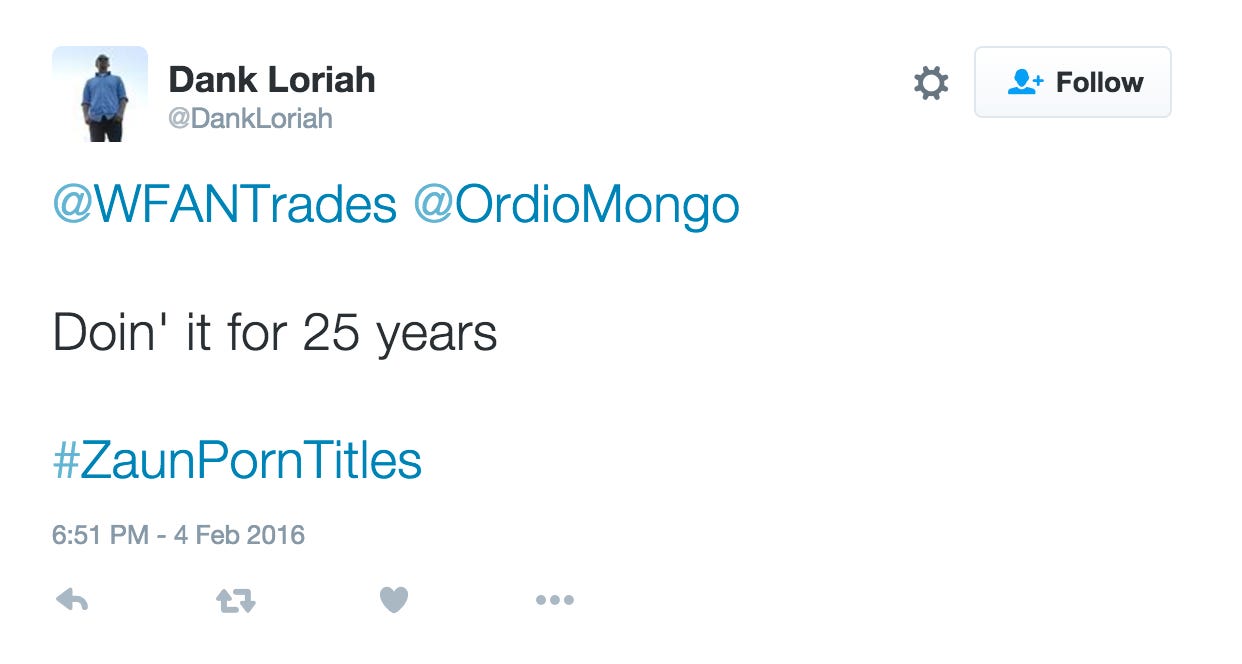