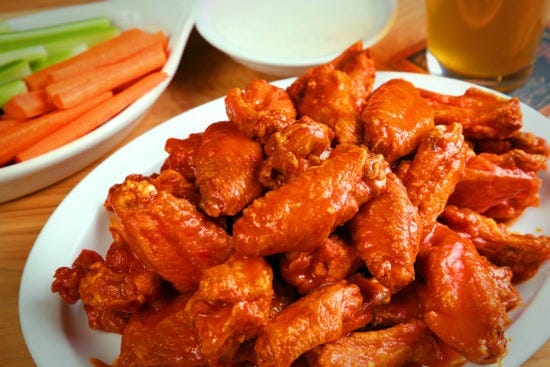 Super Bowl Sunday. Fun for everyone that still has a horse in the race. What if you don’t? Well, then it’s a day filled with a lot of food and commercials that are already released online…. So, basically just a fuck ton of food. Don’t worry; I broke down the best foods for Super Bowl Sunday. (In no particular order)

Let me start off by saying that no one cares if you turn your food into a shape of a football or a stadium or helmets. Make the food delicious and shaped like the devil for all I care. If it taste good, it plays. If not, it’s game over.

Pigs in a blanket

These honestly could be put in front of me after I just ate for 2-3 hours straight and I still would scoop up a couple and pop them in my mouth. If anyone goes out of their way to make them handmade, they are strange. Grab a box at BJs or Costco and throw them in the oven.

It’s like that one weird grandparent everyone has that no one in the entire family wants to talk to that you end up stuck with all night. You don’t want the salsa to be there, you don’t know why its there, but its about 30 minutes before kickoff and you haven’t had real food yet, so there you are woofing your face with salsa on the tiniest of crumbs of tortilla chips.

So many fucking dips

This is the new fad now. “What the fuck can we make into a dip?!” Sure you’ll have the standard people who make really good buffalo chicken dip and that one couple that shows up with taco dip that is fucking repulsive because the wife doesn’t really want to be there but husband wants to watch the game with the boys so she makes gross ass taco dip to spite him. But then there will be that person at the party who will become your bestfriend. That person will be the person who shows up with the new dip. After 15 scoops you’ll look around and ask, “Who made the maple chicken bacon cheese dip?” and soon as that person raises their hand, it’s on. Bestfriends. Game, set, match.

That right there is what I like to call the “I invited everyone over for the big party, threw out the idea that everyone brings an appetizer, then I travel to the grocery store to buy frozen meatballs and threw them in a crock pot, got sliced roast beef at the deli along with some sausage and each threw them in a crock pot, so I can sit on my fat ass and do nothing all day but cut some rolls in half” move. Long winded, I know, but it stays true. The party facilitator is never going to do a lot, they just want the credit of having the party.

I’m not crazy people, I didn’t forget the most important thing to the super bowl spread. Now, wings are unreal regardless of what you’re going with, but you have to be smart. First off, calling on Sunday to place an order for wings is a rookie move and should be avoided at all cost. Also, not everyone can handle “MOTHERFUCKING INFERNO, ENTER IF YOU DARE” temps on their wings, so before you have dick measuring competition with Larry from accounting who somehow ended up at your house for the party and now is eating more crazy hot wings than you, keep it simple and get a variety. As always, if you choose to eat your wings with ranch instead of blue cheese, that is fine. It’s just an early sign that you are a complete fucking sociopath.

Ps- I just don’t believe in desserts during the Super Bowl. Shoot me.

I will probably be tweeting my thumbs off during Sunday’s big fiesta, come join the fun @BarstoolBrosh