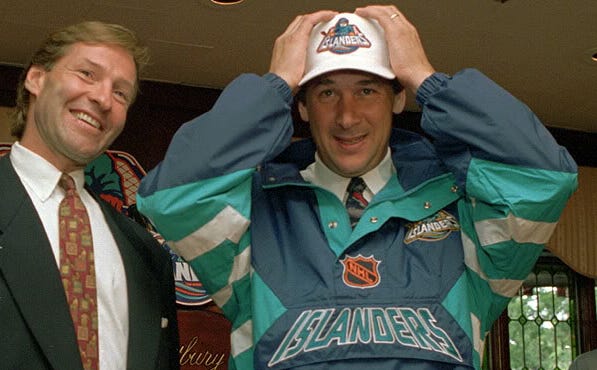 Former NHL player, coach, general manager and current NBC Sports Network desk analyst Mike Milbury has proved time in and time out that he is unfit to do his job properly. His rude and demeaning matter has not only made many of the NBCSN Intermission reports significantly less enjoyable but has also caused many of the fans to call for a change, something that NBC has failed to do. Many believe he is a disgrace to the sport of hockey everywhere and he has proved it once again during the 2016 NHL All Star Weekend. Milbury has said several incredibly disrespectful comments regarding the fan voted captain for the Pacific Division, John Scott.  These comments do not only affect John Scott but each and every fan who passionately voted to see him play. Scott has fans, friends, family, teammates and all the players by his side rooting for him all the way and closely watching only to have Mike Milbury de-escalate everyone’s high spirits and good times. Please do the fans, players, media personalities and John Scott a favor by signing this petition to remove the embarrassment that is Mike Milbury from NBC Sports Network entirely, thank you.

As an Islander fan, I know Mike Milbury as the guy who traded away Zdeno Chara, Jason Spezza, Todd Bertuzzi, *inhales* Roberto Luongo, Olli Jokinen, Wade Redden, Darius Kasparaitis, and Tommy Salo; all during his tenure as Isles GM/Head Coach. Enough of a reason to despise the guy down to the bone, despite the rest of his bylines.

From the average hockey fan’s POV, you know Milbury as the pompous, arrogant, and downright disrespectful intermission analyst for NBCSN. Who as a Head Coach, once jumped into the stands and beat a fan with his own shoe. [I kind of respect that move tbqh]

Always playing the “whose is bigger” game with Keith Jones and never really giving viewers an in depth look into the game in front of them[which kind of his job at the end of the day] Milbs has made a name across the country as the one man in hockey everyone can hate.

Be it smug comments about John Scott at the All Star Game, saying he’d want to hurt Ducks Winger Corey Perry “in a painful and permanent manner” [who doesn’t], or pulling one out of el Pres’ rhetoric and commenting that serious injuries to both Tyler Johnson and Ben Bishop in last year’s Cup Finals shouldn’t be an excuse for losing; Milbury has solidified his position as one of hockey’s biggest Heels.