The reigning American League MVP, Josh Donaldson, was bored at an airport, so he answered fans’ questions in rapid fire fashion. Here were his best responses (with a hat tip to Ian Hunter).

In his career, Donaldson has only faced Wade Davis eight times. He’s 1-for-8 with 4 strikeouts. While he may classify Davis as being the “toughest” pitcher to face, Felix Hernandez is the guy who has his number. Donaldson is 6-for-36 (.167) against King Felix with 10 strikeouts, the most strikeouts against any pitcher in baseball. But, as history will remember, it was Davis who got Donaldson for the final out that ended the Blue Jays’ magical postseason run in 2015. 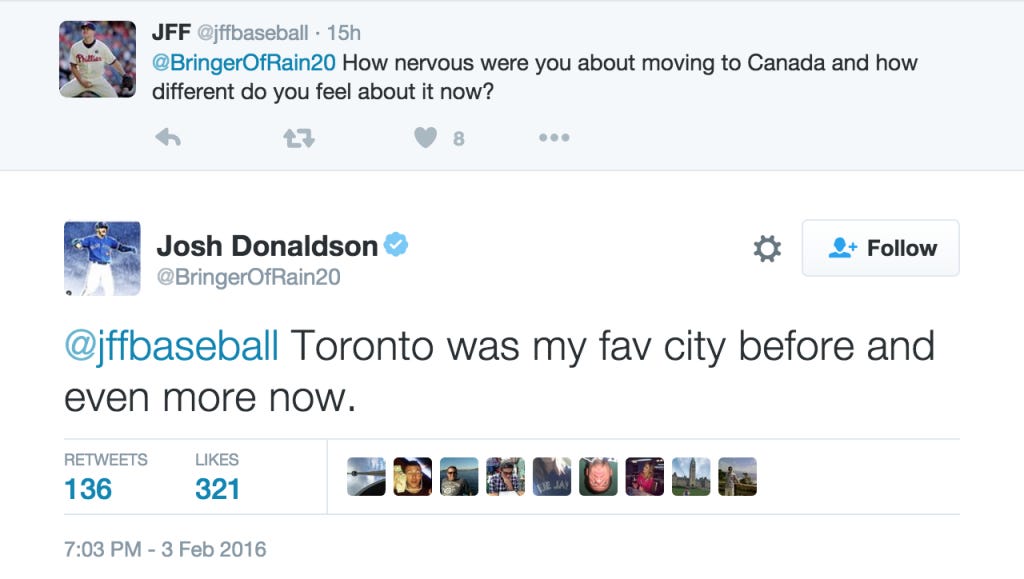 I’m calling bullshit on this one. Granted, he spent the first five years of his career in Oakland, and anything outside of that city will seem like paradise once you get out of there, but baseball players are on the road dozens of times a year. There’s no way he’s been to every major city in America and still been like, “Yup. Toronto. That’s my jam.” Not that Toronto isn’t a great city — it is. It’s actually one of the most beautiful cities in the whole world. But that has fan pleaser answer written all over it.

Okay, so now we can confirm that he’s going with the fan pleaser answers. The people? You mean the people that were throwing beer bottles at babies and shit during the playoffs? Come on, man. Canada’s great, but it ain’t because of the people. They’ve got great beer, some of the cleanest air on the planet (It’s true; look it up), significantly cheaper medications, and free health care. There’s plenty to love about Canada, but don’t tell me it’s because of the people. You’re not The Rock.

Okay, man. If you’re not gonna give real answers here, then I’ll do it for you. Outside of Oakland and Toronto, where you’ve obviously played the most games, your favorite ballpark is Minute Maid Park in Houston. In 23 games there, you’ve hit .370 with an 1.159 OPS. It’s your highest OPS in any ballpark with a minimum of 100 plate appearances.

You better wipe that smirk off your face, boy. I wouldn’t be too excited to face David Price if I were you. In your career against Price, you are 2-for-9 with a pair of strikeouts. 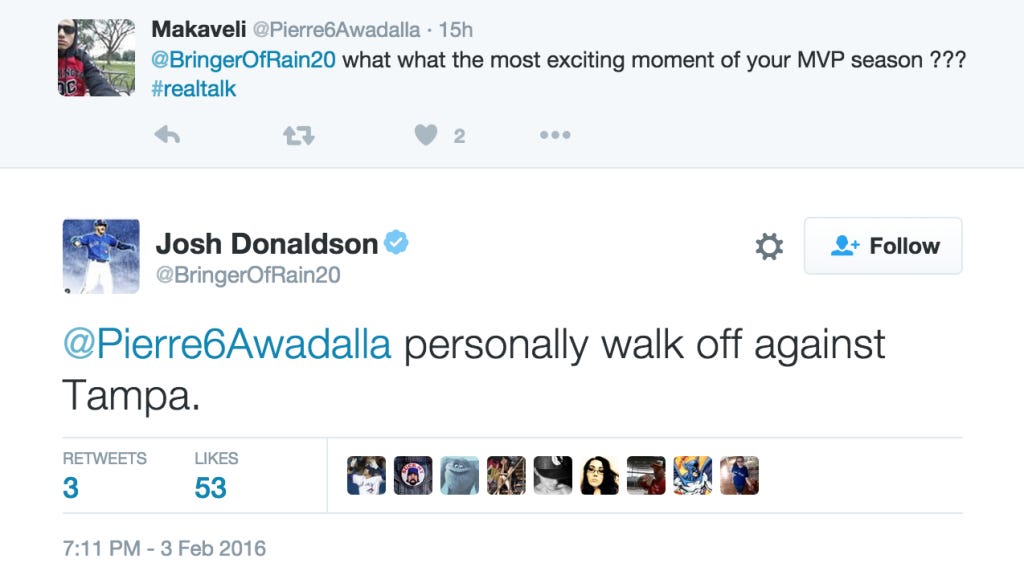 This was actually one of the cooler moments of the entire MLB season, never mind just for Donaldson personally. This home run basically put the nail in the coffin on the American League MVP discussion, if it wasn’t there already. Once Blue Jays fans started showing up to the games, some time in August, I’ll give them credit that they brought a ton of energy to the ballpark, and you could feel it through the TV. I give Blue Jays fans a lot of grief for not caring until halfway through the season and then acting like they had been there all year long once October rolled around, but when they were actually there, they made the Blue Jays’ special moments feel even more special. 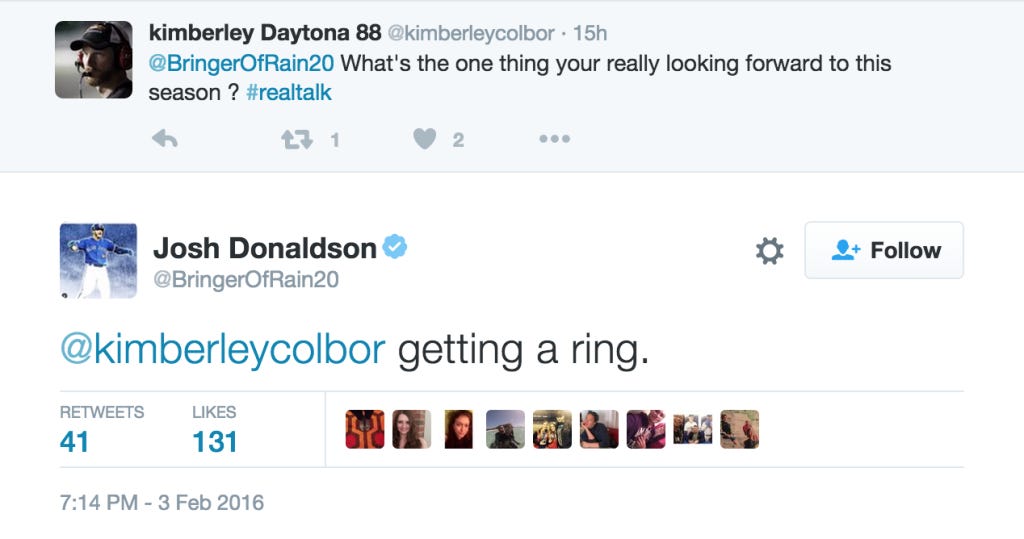 Could it happen? Sure, why not? Vegas has the Blue Jays as a 18/1 shot to win the World Series in 2016 as of right now, although it certainly didn’t help their chances that they lost David Price to the Red Sox in free agency. That being said, they still have far and away the best offense in the game, and Marcus Stroman could easily fill the void left behind by Price, if last year’s small sample size was any indication.

Never leg day, Josh. Never leg day. I’ve never heard a girl say, “Oh my god, that guy is SO hot. Look at his LEGS, ugh.” No. If you have time to do legs, then that means that you have time to do arms for a second time. But I get it. You’re an athlete and blah, blah, blah, all your power comes from the lower half. I understand that, for baseball purposes, you have to say legs. But don’t you ever tell me that you prefer leg day to arm day, because you don’t. Nobody does.

Obviously, you can’t go wrong with picking Stone Cold Steve Austin as your favorite wrestler. He’s been out of the ring since 2003, and he’s still as popular as ever. And Donaldson isn’t just saying “Stone Cold” because it’s the first name that came to his head, given that Austin is the most popular wrestler of all-time, no. He’s a true fan. 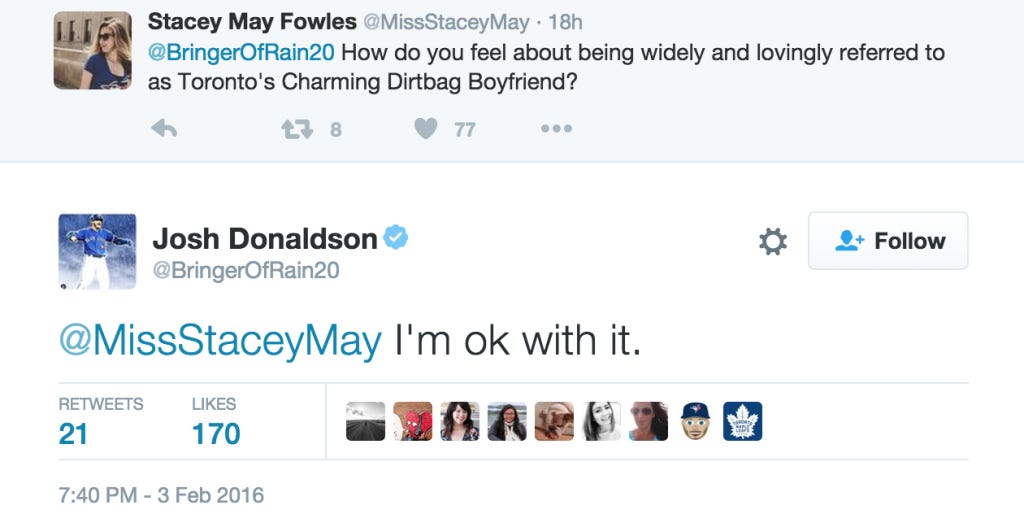 I never knew about this nickname, but it’s great. It’s the perfect backhanded compliment. He’s the guy that dads freak out when their daughters bring him home, because of how he acts and how he looks, but the ladies love a bad boy. It’s gold, and he knows it.

Yeah, this wasn’t your best work, Caroline. This is Josh Donaldson you’re talking to. His pickup line is, “Hey, I’m Josh Donaldson.” No need to get fancy when staying simple works just fine, and they don’t call him Toronto’s Charming Dirtbag Boyfriend for nothing.