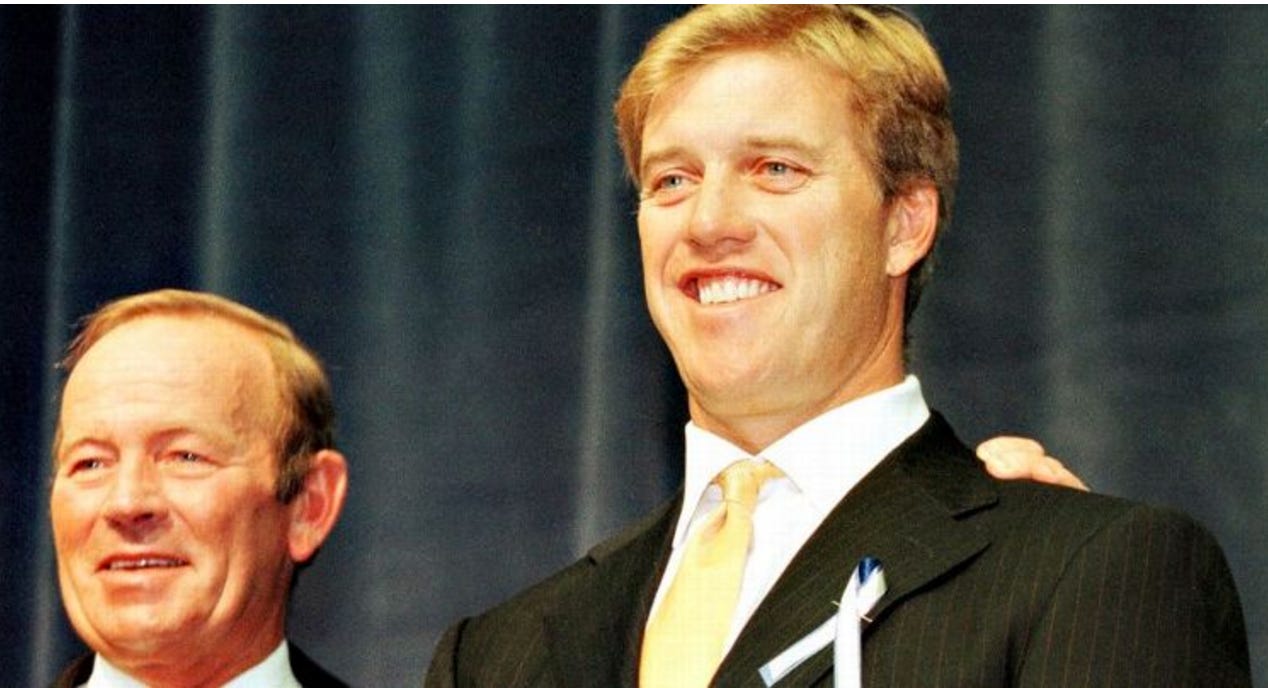 ESPN – The document was dated Sept. 23, 1998, and it contained, at least in retrospect, John Elway’s golden ticket to a lifetime fortune. The deal: Denver Broncos owner Pat Bowlen would give Elway the right to buy 10 percent of the Broncos for $15 million. Bowlen would also give him the option to buy another 10 percent of the franchise by forgoing the deferred salary Bowlen owed him on the condition Elway would become a special assistant to Bowlen, which would eventually lead to a COO job. That total deferred salary? About $21 million. But there was even more that made the deal a no-lose proposition. If Elway wasn’t happy with his investment, he could sell back his interest, two to five years later, for $5 million more than his original purchase price plus 8 percent interest a year. Since the Broncos weren’t making cash calls, it was essentially free money. And then came the real kicker. If Elway agreed to the deal, he would have right of first refusal to buy any other stake in the team if the Bowlen family sold to an outsider. NFL teams don’t come up for sale often. The value of NFL franchises has skyrocketed, but even then the Broncos were worth plenty. Still, Elway had the wherewithal to easily make this deal. In 1997, he made the largest business deal an NFL player had ever made off the field by selling his car dealerships for what turned out to be $82.5 million, comprised mostly of AutoNation stock. Elway had nine months to think about the offer. The option to buy a piece of the Broncos expired in June 1999. In January, he led the team to its second straight title. In May, he retired. June eventually passed and Elway never executed the deal, which was not extended and never offered again. Sixteen and a half years later, as the Broncos are back in the Super Bowl, Elway is a paid employee of the team with no stake in the franchise. The 20 percent stake he passed on, based on a Forbes 2015 valuation of the team at $1.94 billion, is now worth $388 million, which would have been a 646 percent return on the 1998 investment, adjusted for inflation, had he made it.

Elway testified In 2004 that he didn’t take the offer because he “did not see a place for himself as an executive of the team.”

But Elway still could have purchased the original 10 percent offered for $15 million. And it’s not only that he passed on the deal, it’s where he put his money instead.

Elway and his partner in his car business, Mitch Pierce, took that exact amount — $15 million — and invested in a company run by a man named Sean Mueller. That company turned out to be a $150 million Ponzi scheme and Elway and his partner were among the largest single investors. Elway and Pierce withdrew $6 million from their investment, but still ended up losing more than $7 million in the scheme when it was all said and done.

I love stories like this. They’re my favorite. Maybe because misery loves company. But I love hearing stories about huge missed opportunities. Stories like Will Smith turning down the Matrix trilogy or Donald Sutherland turning down a percentage of equity in Animal House. Zuckerberg’s roommate not buying into facebook or that dude who sold his Apple stake for pennies. The woman who sold the Nike Swoosh for $35.  The list goes on and on. Smart people who made idiot moves and probably never sleep another sound night in their lives.

Well add John Elway to that list. I mean nobody is crying for this guy, he’s one of the 5 richest players in NFL history. He’s worth $145 mil. But any time you miss out on a $375 million profit, you probably want to jump off a bridge. Especially considering he took that same money and blew it on a Ponzi Scheme. He had the money – just netted $82 million from the sale of his car dealership. Had money to burn and the opportunity of a lifetime and he just let the expiration date pass. Like those idiots who dont turn their lottery ticket in before the deadline. Should I invest in an NFL franchise, perhaps the soundest investment anyone can make? An opportunity that is so good, the opportunity almost never arises? At a price thats incredibly low with all sorts of kickers and fail safes that made it the most stable purchase anyone could ever make? Or just toss it in this investment fund over here run by some jamoke?

Brutal decision. Especially with that rationale. The executive VP of football operations for the Broncos didnt see any role for him as an executive. Oof. Again its not like John Elway deserves all our Ts and Ps but I love hearing the business side of things and seeing the “what could have been” scenarios.

PS – Darren Rovell definitely came in his pants while writing this article. I mean he may have legit masturbated while reading these details.