That’s how a man eats wings, ladies and gentlemen! When wings come out you turn into a vacuum and suck up anything that’s put near your mouth, no matter how bad for you it might be. Meat, bone, gristle, snot, your own finger (not embarrassed to say it’s happened a time or two), anything. It’s all edible and goes right down the hatch. Even if you’re not in a wing eating competition, wing eating is a competition. Against yourself. I have a friend who took his girlfriend to a wing night in college and he swears she broke up with him a few days later simply because of how disgusting he is when he eats wings. That’s what it’s all about. You don’t take the time to blow your nose, or clean your face or fingers, that’s insanity and would be like showering in the middle of a workout. When it’s wing eating time, it’s wing eating time. Clean up the carnage later. That gloved psycho from a while back could learn a thing or two from Gronk, he could learn how to be an American man. 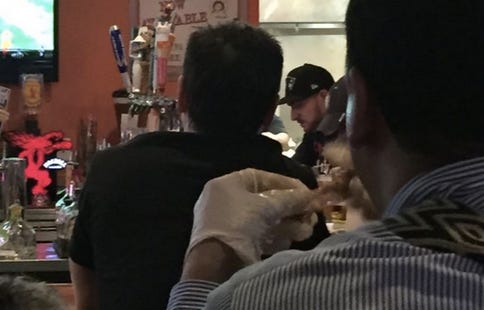 1. Don’t you dare tell Gronk he’s crying even if he just said he’s crying. Legitimately offended which just goes to show you that Gronk is perpetually a school boy in the recess yard and won’t stand for someone calling him a girl.

2. The wings were so hot they may have given Gronk down syndrome? Something to keep an eye on this offseason.

3. Eating wings was harder than the Super Bowl. Not sure if that’s more of a statement about how hot the wings were, or how good Gronk is at football. Either way, it’s a powerful one.