Every so often I’ll fall into a rabbit hole watching video on baseball players.  Instead of just watching baseball to watch it, I’ll look at the game under a microscope to break down fundamentals, mechanics, trends, flaws, etc.  That happened to me with Carson Fulmer last night because I cannot WAIT for him to pitch for the White Sox.

Carson Fulmer is one of the more decorated collegiate pitchers in the last decade. Though he was a top 10 pick, he was still one of the more polarizing figures in the draft class. Entering the 2015 draft, hardly any scouts were in concurrence of what his ceiling and floor were. All agreed he had A+ competitiveness, a “fuck you” attitude and killer instinct on the mound, and electric “shit” to pair with those things, but there was extreme fear about whether or not he’d ultimately wind up as a starter or reliever due to his violent delivery and smaller stature.

Fulmer is listed at 6’ 195. I saw him at Soxfest last weekend up close and personal, and let’s just say that 6’ is extremely generous… 5’10’’, 190 is more like it. That said, he’s got lumberjack forearms, tree trunks for legs and a big ass. A good comparison would be Billy Wagner, at least in stature.

Before we break him down a bit, I’ll say this again: White Sox fans are going to LOVE Carson Fulmer. His personality perfectly resonates with the blue collar South Side working man, even if he does wind up as a closer down the road. The fire and passion he pitches with will instantly make him a fan favorite, and we will see him in The Show sooner than later.

The GIF above shows that he has a true over the top delivery with great arm whip. It’s the opposite of someone like a Matt Thornton. Both pitchers have + to ++ fastballs, but Thornton would touch 97-98 with minimal effort, while Fulmer puts everything he has behind his fastball. That said, though he has an over the top delivery, Fulmer has ridiculous arm side run on his fastball. Pitchers, especially righties, develop this run by applying a little more pressure with their index finger on the seam of the baseball rather than balancing the pressure between their index and middle finger. With added pressure to the index finger along the inside seam of a two-seam grip, it will cut down on the baseball, generating sideways spin, causing the ball to run from lefties and into righties. This helps a pitcher like Fulmer compensate for a lack of tilt and downward plane on his fastball that he cannot physically generate because of his height. A pitcher of prototypical height, like say a Noah Syndergaard, will release the ball from a height of 6’ or so when he releases the baseball, with the baseball hitting the glove at a height of about 3’. The more tilt the ball has, the more distorted the hitter’s view of the baseball is, obviously making it harder to make solid contact. Instead of possessing a fastball with a vertical action, Fulmer has extreme amounts of horizontal movement. Start it at the front hip of a lefty, it’ll run to the inside of the plate; start it over the middle of the plate to a righty and it’ll shatter bats. When a baseball has arm side run like this, it’ll almost look like the ball takes off with an extra few MPH mid-flight, and Fulmer’s is so good you can actually detect this on video. This horizontal movement coupled with a 93-95, 97MPH velocity will make his fastball a true grade A outpitch for him, once he learns to harness the command and hit corners consistently with this pitch.

I fully expect him to dominate right handed hitters, but he’ll find a lot of trouble with left handed hitters if he can’t consistently hit corners with this pitch. Lefties and their natural upper cut will try and cheat on his fastball, and if he starts it on a corner it will run into the middle of the plate and the fat part of the bat. No bueno.

Fulmer already has a two pitch repertoire that would make him an effective big league reliever at this very instant. His curveball grades as a future 60 offering, which Fangraphs states is a “plus” offering. I happen to think they’re short changing him a hair here. Now granted I’ve only watched him on YouTube and a few CWS starts, but his curveball is flat out wicked. All-star level, I believe. Because he has a true over the top delivery, his curveball has a 12/6 break. It’s not long and loopy (not that it’d be bad if it were), like a Barry Zito, rather hard and sharp, with late break. When he buries this pitch in the dirt, it’s going to generate a lot of swings and misses, as hitters will think for a split second that it’s a fastball, due to the plane of the pitch not differing too much from his fastball when released. I don’t see Fulmer hanging too many curves at all, because the spin he generates is so tight, that even when it’s left up in the zone it will still have a sharp breaking action.

Changeup: Fulmer has shown flashes of possessing an average to plus changeup. That’s not me talking, that’s Baseball America. The reason I say “flashes” is because he hardly ever used it in college. Here’s a GIF of one:

That’s a perfect pitch. What remains to be seen is if he can repeat this action on a consistent basis; in order to be a upper-rotation pitcher in the league he’ll need a 3 pitch combination. With the arm speed Fulmer possesses, and under the tutelage of Don “I can turn a pile of shit into Cy fucking Young” Cooper, it shouldn’t be too difficult for Fulmer’s changeup to develop to at least a solid third offering. Ideally, however, it’ll advance to the point where he can work off the pitch early in the count, a la Chris Sale. With his mechanics (more on this in a bit) he runs the risk of developing arm issues as innings and pitches add up. Working off a changeup, as opposed to a power fastball and hammer curveball, adds years to a pitcher’s life.

Command: This is Fulmer’s biggest weakness. It’s not too dissimilar to what hurt Carlos Rodon in 2015, but it’s for different mechanical reasons. If Fulmer had prototypical size and a less violent delivery, he might have been the 1st overall pick. His shit is that good. His command, however isn’t, and it’s because of his mechanics. Check out the GIFS below:

Fulmer has a max-effort delivery. It’s how he generates a 97MPH fastball. When he loses control of his pitches, it’s because he gets rotational in his release and takes his eye off the target. I like to use analogies when discussing both hitting and pitching. Imagine two trains on the same track barreling towards each other. If they hit each other in an exact line, the collision will be extreme. If they hit each other at an angle, they’d bounce off each other and the collision wouldn’t be as big. When Fulmer delivers a pitch he gets a little rotational; his back leg swings around, causing him to fly open, exposing his throwing shoulder while ultimately winding up facing the first base side of the diamond. If he’s not looking at the target all the way through his follow through, which he often doesn’t, he’s going to lose command of his pitches and get wild and throw balls, or even worse be wild within the strike zone.

On top of all this, he has a violent head jerk which will distort his view of the target as well. He absolutely needs to clean all this up, which won’t come easy due to how violent his delivery is at the moment. He had ratio of about 3.5 BB/9 his last season at Vandy, which isn’t horrible, but he was also generating swings and misses or weak contact against college hitters, not Miguel Cabrera or Michael Brantly. His goal should be to lower that to around 3.0 to truly become an upper-rotation starting pitcher in this league. Once he cleans up these mechanical issues, which I have no doubt he will with Cooper coaching him, he’ll mesh with Sale/Q/Rodon to make a very formidable starting rotation for the foreseeable future.

Injuries are a complete crap shoot with pitchers. Sometimes pitchers can throw all day everyday and have unorthodox mechanics (Chris Sale) or have an injury plagued career with clean mechanics (Scott Kazmir). One thing that scares the absolute shit out of me, though he has never been injured before, is when Fulmer plants his foot, he possesses an “inverted w” action with his arm. 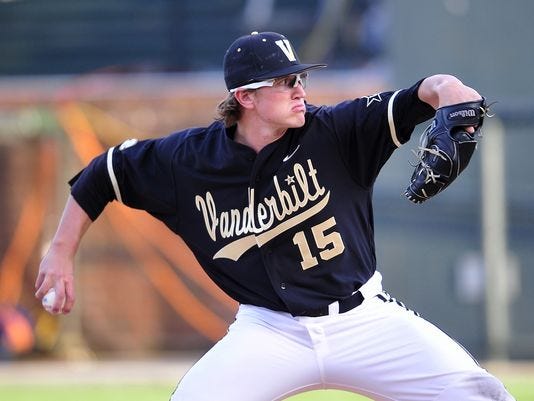 This can lead to torn rotator cuffs, UCLs, and Tommy John surgery. This is why I feel like it’s of absolute dire importance for Fulmer to develop his changeup as best as he possibly can. Chris Sale has a similar motion when throwing, but has learned to work off his changeup. He gets ahead with his change and puts hitters away with his fastball and slider. Like Fulmer, he entered the league with a two-pitch fastball, breaking ball combo. Now instead of relying on his slider, which generates tremendous torque on the elbow, he relies on an 85MPH changeup and is throwing his slider less than ever, though it may be the best pitch in his arsenal. With how scary Fulmer’s throwing motion is to watch, adding a changeup will add years to his life as a starting pitcher.

A comparison I’ll use is Tim Lincecum. Lincecum was the best pitcher in baseball for a stretch, but like Fulmer, was small in stature and broke down physically in the last few years. I assume the Sox plan to season Fulmer up a bit in Birmingham and Charlotte, get him MLB innings out of the pen in the latter part of 2016, and eventually work him into the rotation in 2017 similar to Rodon and Sale. At that point they’ll want to get 3-4 of his best years out of him while he’s young, cheap, and before he’s eligible for arbitration and free agency. When the time comes to extend him, if he’s shown no signs of a physical breakdown like Lincecum, great. If not, that’s all good too. It was still worth investing the 8th overall pick in him and getting 3-4 stellar years out of him as a starting pitcher.