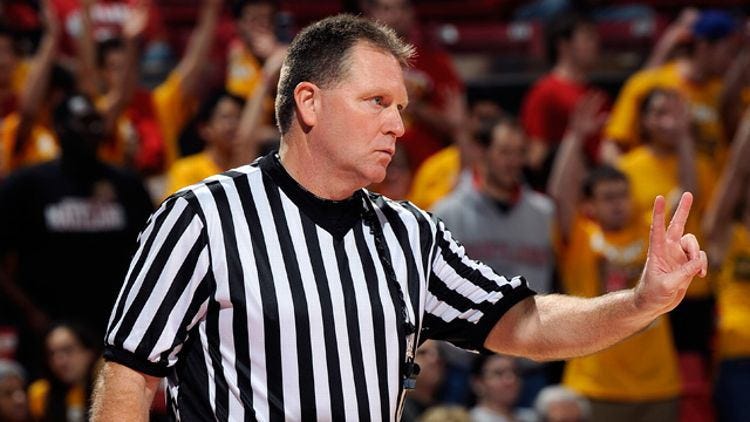 There’s a serious problem in college basketball. It’s one that dominates the headlines almost every season and now during this absurd year, it’s rearing its ugly head yet again.

I’m talking about the officiating. It’s bad. It’s beyond shitty.

Here are two examples from yesterday alone. First we have this foul call on Isaiah Briscoe, which was his fourth and while the call didn’t lose Kentucky the game, played a pretty big role having to take him off the court. What was the foul? I guess standing on the side of the basket? The worst part of this was the fact it was such a delayed call.

Okay, so there was a foul call. Now, here’s a non-call from last night. I can’t stop watching this and laughing about the ref giving the play on call. If you really want to get into it, not only did he not call the foul, he missed a walk if it was truly a play on.

This shit can’t fucking happen anymore. It’s time for everyone to revolt against this shit that the NCAA is giving us known as ‘officials.’ Explain to me how Teddy Valentine and Karl Hess still have jobs. I’d love to hear the backing of this.

So, what’s the solution? Well, in talking to some people around college basketball here are some ideas we came up with. In order to be a ref and advancement for refs the following must happen.

1) In order to be a Division I official, you MUST have some sort of college basketball experience. It doesn’t matter if it’s Division I or NAIA or Junior College, there must be some sort of experience. First off this takes away the ‘dinosaur’ who can’t keep up with the game. Don’t believe this happens? Read this about a sports radio host at the Northern Kentucky/Oakland game this week. More importantly it helps with understanding the flow and physical play of the game. That’s the biggest problem we often see with these refs is the inability to gauge what’s truly a physical play compared to a foul. The only people who know how to compare the two? Ones that have played.

2) Adding a replay official a la college football. This one is pretty simple, have any sort of ref move to a replay official, that can keep an eye out for egregiously missed called. For simple calls to change like who the ball is out of bounds on, use this official. This won’t add much time to the game, which still keeps it under 2 hours.

3) This is a simple rule change. Move the foul out rule from 5 to 6 in college hoops. I’m fine with the freedom of movement foul calls, but too many times we see games decided by bench players. Let the best players play and let coaches coach instead of worrying about sitting a starter for 12 minutes because of 2 fouls in the first half. Trust me, this is for the betterment of the product and fans watching.

4) Improving the grading system for officials. We hear about this a little bit throughout the year right now, but it’s never truly used correctly. Refs are still lauded for tenure and seniority. This needs to stop. I don’t care if it’s your first year as an official, if you’re the best out there, let them have the big games and the NCAA Tournament.  The grades should come from coaching staffs combined with a committee of former officials/coaches/etc that can accurately give a grade.

5) The biggest problem former players have told me is the consistency in the way refs call the game. There needs to be some sort of penalty for refs that can’t stay consistent. How many times do we see the first half being called correctly, letting most of the teams play. Then the start of the second half we see six foul calls the first 90 seconds? If you are going to call a foul in the first 2 minutes, you need to call it the last 2 minutes. The saying ‘let the players win the game’ is such bullshit. The players draw fouls. So, if there’s a foul call the foul.

Another night, another round of upsets that make no damn sense. It started at 7pm with Kentucky blowing a 21 point lead at Tennessee. Everyone knows I am a Kentucky grad and therefore a Kentucky fan, so I say this coming from that standpoint. That was arguably the most embarrassing loss I’ve seen under Calipari. It makes no sense how this team is so bad defensively. With Isaiah Briscoe, Tyler Ulis, Alex Poythress and Marcus Lee on the roster, this team should be a top-10 defensive team in the country. That’s clearly not the case though. So, what’s going on with this team? This is something you see with Kentucky and now Duke, when guys unexpectedly leave after one year, there’s a massive hole somewhere. For Kentucky, they expected Devin Booker and Trey Lyles and/or Dakari Johnson to return. Obviously they are all gone, leaving a hole in the post and shooting. Duke expected Tyus Jones for more than one year leaving the hole at point. This team just can’t win on the road. They have some ugly losses to Ohio State, Auburn and now Tennessee. The offense is starting to click with Tyler Ulis putting up absurd numbers and Jamal Murray is finding his shot. But, defensively this team needs some serious help.

After that we had Providence losing on the road to DePaul. Again, another ugly road conference loss that we’ve seen this year. DePaul did a helluva job on Kris Dunn, holding him to 5-for-20 from the floor. Yes, Bentil went down with an injury, but when he was playing, DePaul shut him down as well. Bentil was under 50% from the field, which is something you don’t often see from him. This is where I get nervous with Providence, when these two guys struggle they simply don’t have a third option that can help carry the load.

ICYMI: I sat down with Tod Lanter, who was a walk-on at Kentucky the last three seasons and talked about life in Lexington. He also discussed the rivalry with Louisville, who his most talented teammate was and what John Calipari is really like as Coach Cal: