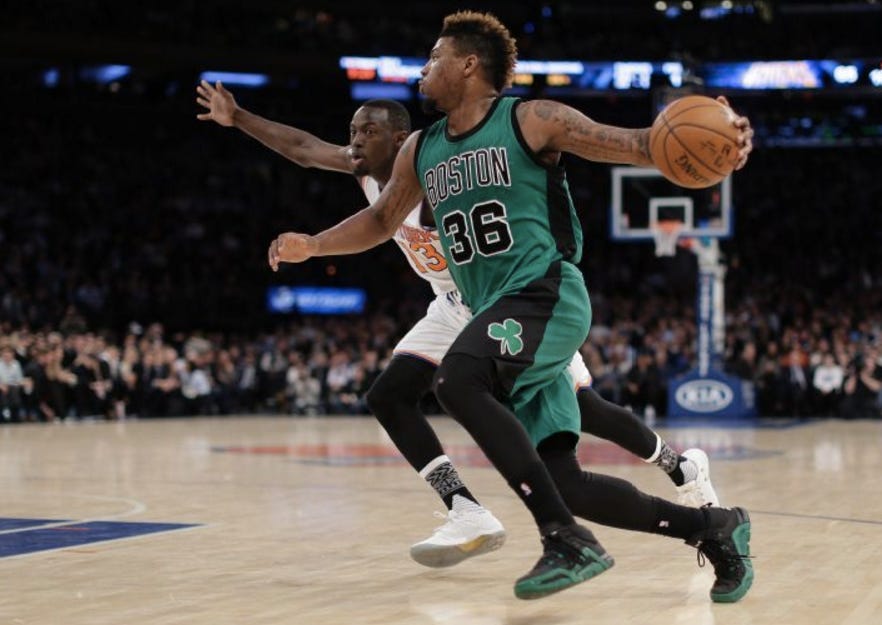 Call me crazy, but this win showed me a lot. See, recently, whenever the Celtics had a winning streak and then lost, usually another loss followed. It happened on their four game winning streak from Dec 21-27 (they would drop their next two against LAL/NYK) and again from Jan 13-16 (with losses to DAL/Toronto right after). After dropping the second of a home and home against Orlando on Sunday, which broke their five game streak, I don’t think it was a stretch to be a little concerned heading into last night’s game in New York.

What we got, was I think just what this team needed. They got back to their defensive roots after giving up 119 points. This was by far the most important takeaway for me. A total of 89 points was the lowest given up by the Celtics since their Dec 23rd game against Charlotte. Interesting enough, that performance also came on the road.

Now I won’t get too carried away, in all honesty this was a game the Celtics should have won, so they don’t get special praise for beating the Knicks. I will say however, this was nice to wake up to

– It wouldn’t feel right starting any other way. What a performance from Tyler Zeller. On one hand, it’s great to know he’s still alive and not just an NBA corpse. On the other hand, how about just going deep to your bench and finding a guy who can give you 27 minutes 16 points 10 rebounds and shoot 8-13? Now imagine that player is Tyler Zeller. Look I haven’t seen Zeller play like that in a long long time, and I’m comfortable saying that without this performance, the Celts don’t pull this out. Give him credit, he has soft hands around the rim, he can sorta make a 15-18 footer sometimes, so he works in Stevens’ system. What I’ve found to be pretty consistent whenever Zeller is on the court, is how well he runs, and how it creates easy baskets for him. Two or three times a game you’ll see him beat everyone down the floor, guy’s a gazelle

With his 1st double-double of the season in last night’s W, Tyler Zeller was the @HRBlock Clutch Player of the Game.https://t.co/6FYDEZo0Hr

- Maybe the bench did something before the game, because when you add in Evan Turner’s night, things get interesting. I wrote a few days ago how consistent Turner has been, and you can’t deny, he’s been great. Some could argue he’s been the key to this nice stretch of decent play by the team. If you look at why Turner has been successful, it’s because he has done a great job of getting into the paint. He’s finally made the decision to abandon the three point line, and use his dribble drive to get into the paint, where he’s more comfortable. Like this

This is Evan Turner at his best. As one of the only people on this team that can consistently create his own shot, all he needs to do is get into the paint. Every single shot he takes from now on should come from either the paint or the low block. He’s just so much better in those areas

Now the thing that still makes me nervous is when Turner plays well, he can start to do some crazy things. Sometimes they work out, most of the time they are terrible turnovers, but we got lucky last night. What a pass

- It won’t happen often, so I am going to enjoy typing this. Godzingis was a complete non factor. Did he even play? Considering last time we played him he made it rain on our heads, holding him to 4-11 and a measly 10 points is a huge win. Which brings me to the Celtics defense. I touched on it a bit earlier, best effort in over a month. The Knicks shot just 37% for the game and had 16 turnovers. The Celtics did a great job turning them into a long 2 shooting team, and fortunately, Melo did’t get hot. They played in your face defense, especially in that third quarter to really pull away.

Oh, and Marcus did Marcus things

– For what seems like the third or fourth game in a row, we got ourselves an end of quarter bucket. This is making me more and more confident for that one time we’ll need a game winner in the fourth. Celtics are great in this area

Avery Bradley makes sure to leave one last mark before the break. Here’s a look at his step-back buzzer-beater pic.twitter.com/YwWeiUc1CT

– Even though they couldn’t hit a three to start this game, I was happy to see they didn’t go crazy, and only attempted 19 on the night. Instead, they took it to the Knicks, especially in the paint. A 58-28 advantage, it’s pretty simple. This is the formula the Celtics need to follow to be successful. Easier said than done sure, but there should be no debate this is how they should play.

– Things certainly didn’t start out so hot. Three straight possessions to open the game with a three point attempt (all missed) then a couple missed FTs, then another missed three and boom 9-0 Knicks just three minutes into the game. It’s crazy to think the Celts actually pulled this game out after starting this poorly. Just so many things wrong here I don’t know where to start. Hopefully they see this on film and realize how terrible this was.

– Didn’t love the sequence right after Kelly Olynyk’s three to make it a 81-70 game. This was their chance to really step on the throat of the Knicks as you suddenly had all the momentum. But then, a quick 7-0 run by the Knicks and you were right back in a dog fight midway through the fourth. Celts got lucky here I feel like.

– Still too many fouls, this will haunt me for the entire season I just know it.

– Pretty underwhelming nights from both Avery Bradley and Sullinger. With how well Olynyk is playing, maybe we see Brad swap him for Sully moving forward.

– Marcus Marcus Marcus. If you’re looking to part with 5k so easily, I will gladly take some. This was bad, like some 2k glitch or something. Sort of impressive if you ask me

Alright so where do we go from here? We’re now almost at the All Star break and the Celtics sit at 28-22. Do people believe yet? They’ve shown that they have the mental strength to get past a poor performance to an inferior team, and have now won 6 of their last 7 and 9 of their last 12.

Now tonight, they return home to face the Pistons, and it presents yet another challenge. Will they have a letdown game with Lebron on the horizon? Detroit has shown to be a tough play for the Celts so far this season, so I’m interested to see how the Celtics respond.

I will say, if this season has taught me anything, it’s that the Celtics will probably lose to Detroit and blow out Lebron on Friday. Either way, things are looking good.