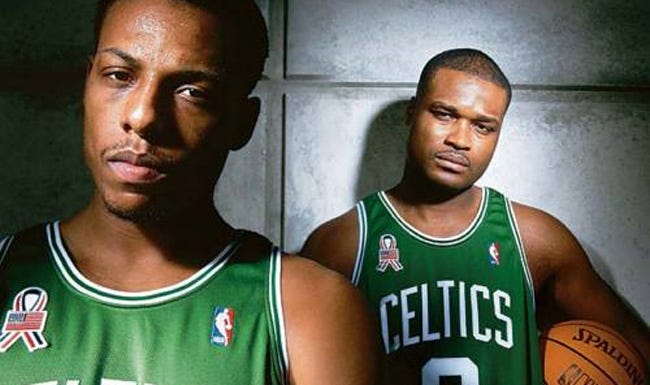 If you haven’t listened to Pierce and Chris Mannix talk (cough cough hey Prez) stop what you are doing and listen to this immediately. For those of us who are 28-31 Pierce was our generations Bird. Our franchise player. Personally, he’s my third favorite Celtic of all time so this was a great look into the inner workings of those 2000s teams. Man some of those times were rough.

But this interview got me thinking, what were some of the biggest Pierce moments? In no particular order because who could do that

So much to love about this clip. First, it shows how bad of a dude Pierce was. What I love most about him is that he runs his mouth with the best of them, but most importantly, he backs it up. Young Pierce was such a fucking stud.

Oh and how bout that celebration from Gorman? Think he was excited?

There’s a reason we started how we did, because we got a repeat of it years later, this time right in Lebron’s fucking face. Ah that 2012 year, so much joy, so so much pain.

The Wheelchair game. Utterly ridiculous that he needed one, but at the time I remember myself falling to the floor. Hadn’t been that crushed since the Pats ’07 loss. But then, he jogged out, hit those threes, and the rest was history. Nobody ever said Pierce wasn’t a guy who loved some drama.

What a moment this was. I remember being at the Garden with my Dad when this happened and it was such a weird feeling. Passing Bird was a big moment in our relationship because to this DAY he will not entertain the chance of a Pierce/Bird comparison (he’s right) but the anticipation with every shot he took was crazy. It was cool to see the guy from your generation pass such a legend, especially at home.

Fuck you Lebron…you too Ray.

Ok now things are getting a little dusty around here. From blown ACL to Finals MVP, what a ride that 2008 Finals was for Pierce. To get the MVP against his childhood team was pretty special, and really who else could you give it to? The Truth, The MVP

Basically this is my way of saying I very much still miss Paul Pierce and damn you Chris Mannix for making me have all these feels.

I couldn’t leave this one out…

This was maybe a Top 3 most emotional day of my entire 28 years on this planet. I’m talking full on balling. Being in the crowd for this tribute and seeing absolutely everyone around you also crying made me cry even more. So much emotion, so much respect, so much thankfulness. In fact, I just watched this video and I’m crying as we speak. I am not ashamed.