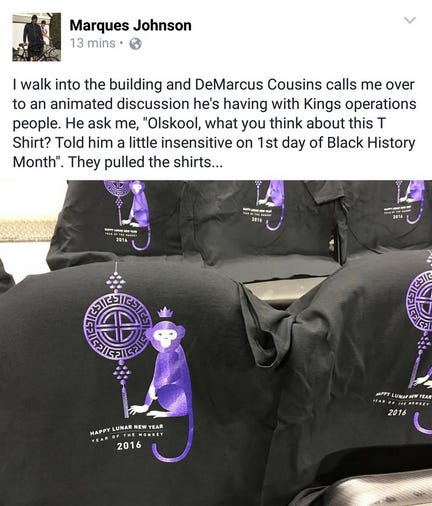 My knowledge of the true definition of “racism” is on par with Ron Burgundy’s knowledge of the definition of “diversity,” so I could be wrong here, but this seems a little racist on Boogie’s part, no? Rejecting another culture because using misguided sense you feel like its existence offends your culture? It’s the Year of the Monkey this Chinese New Year. It’s next Monday, February 8th. This is the last Kings home game before then so they wanted to do something for their Chinese fans. Everything makes pretty perfect sense. Taking that as a slight against African Americans is preposterous.

Look, I understand that racist idiots call black people monkeys, that fact is not lost on me. But are we just not allowed to mention primates during black history month now? Does the chimpanzee exhibit close at the zoo? Are parents not allowed to read Curious George to their kids? No one can play with a Barrel of Monkeys or watch “Dunston Checks In”? Where exactly does it end? If I were a Chinese fan of the Kings I’d start screaming racism and just watch the world implode while two groups of minorities argued about who was being more racist towards the other. That’s how this world deserves to end. Not by nuclear destruction, an asteroid, or global warming. We should get sucked into a black hole of “No! YOU’RE more racially insensitive than I am!!” and cease existence.