WSJ-  The Golden State Warriors seem to have everything an NBA team could ever want. Until recently, though, they still felt there was something missing from another dream season: peanut-butter-and-jelly sandwiches.  In an effort to defend their NBA title, Golden State’s training staff all but eliminated sugar on the team’s private plane this season. The idea was to make the Warriors eat healthier, and the players were willing to accept the changes, saying goodbye to soda, cookies and candy while in the air.  The Warriors are unlike most NBA teams in many ways, but there’s nothing exceptional about their consumption of PB&Js. On the training table in their locker room before their games are all the standard ingredients: bags of whole wheat and 12-grain bread, a can of Smuckers strawberry jam, a jar of extra crunchy peanut butter and a bigger jar of creamy peanut butter. The Warriors, for the record, are a Skippy team.

The backlash began with Walton. When he wasn’t coaching as Steve Kerr’s interim replacement, Walton went out of his way to bother everyone he could about the PB&Js, even though he’s well aware of the sugar in jelly, fat in peanut butter and all that awful gluten in bread. “I stuck to my guns,” Walton said, “and I kept complaining.”  He complained to performance coach Lachlan Penfold. He complained to flight attendants. He complained to anyone who would listen. Walton didn’t have to enlist any Warriors in the effort, he said, because he already knew whose side they were on. “Every player loves them,” Walton said.

That left the trainers in a jam. Once they learned that some rituals are impossible to interrupt, the inevitable occurred last month: the PB&J embargo was lifted. The Warriors had won yet again.  “Cookies are gone, soda is gone, all that’s gone,” Walton said as he carried a cupcake into the coaches’ locker room after another Warriors win. “But the PB&Js are back.”  It’s still a mystery to some Warriors players why PB&Js were suddenly available again. They didn’t know if the pressure from Walton really worked or if someone else was pulling strings behind the scenes. “Somebody made a call,” Livingston said. “Probably Steph.”  Golden State guard Andre Iguodala has a similar theory. Iguodala said the Warriors are smart to avoid eating sugar—with one exception.  “Steph likes peanut butter and jelly,” he said, “so we’re gonna let that slide.”  Curry was sitting in the adjacent locker when he overheard Iguodala. He immediately looked up from his phone and over at his teammate. And then he nodded along in agreement.

That folks is how a leader leads.  Sure playing like a cheat code is one way.  But getting PB&Js, and more importantly sugar, back into your teammates’ lives is another.  While James Harden and LeBron were getting their coaches fired, Steph was fixing problems. There is truly nothing he can’t do.

And for the record, I have been #TeamSkippy, #TeamCreamy, and #TeamSmuckers for life.  Always have been, likely always will be.  But the fact that Steph and the Warriors eat strawberry jelly has me questioning my membership in #TeamGrapeJelly.  Don’t get me wrong, I have never once thought about switching sides.  But I am also always looking for the easiest way to make myself better.  And if incorporating some strawberry PB&Js in my life could do that, then that is what I will do.  Again, just trying to become a better person and a better baller without having to leave my house.

I also saw this the other day and thought it was a complete game changer.  I have no idea how we made it to 2016 without a crustless bread option.  And I am not saying that crust is trash, because it isn’t.  But sometimes you feel like crust (usually with a grilled cheese), sometimes you don’t (in my case, usually with a PB&J). 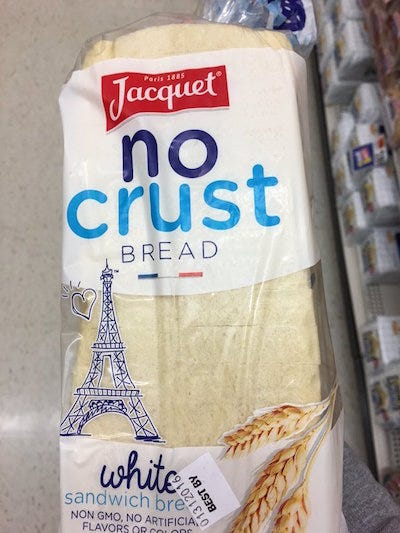 And since I have gone a little poll crazy with Google Docs lately, lets put a half dozen or so PB&J-related things up for vote to settle things once and for all.

P.S. This appeared in the article as well.  Watch out NBA.  Godzingis just discovered the power of the PB&J.

The simple American sandwich has become a significant part of NBA culture. PB&Js are as much a part of a player’s daily life as the pre-game nap. Even rookies learn to subsist on them right away. New York Knicks sensation Kristaps Porzingis, for one, had never tried a PB&J as a child in Latvia. Now he’s yet another addict.