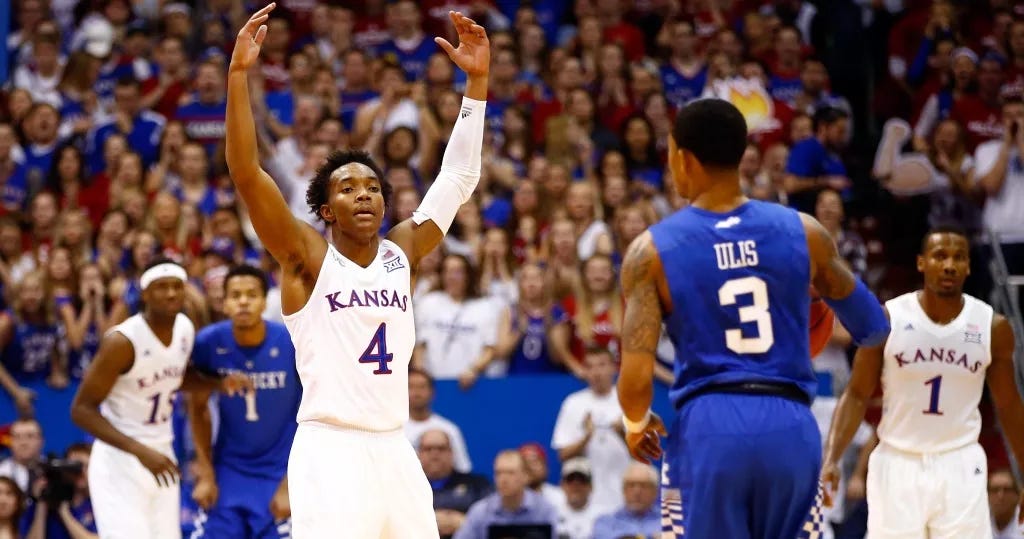 Saturday was a perfect day for college hoops. You had the two best programs in college basketball (sorry UNC and Duke, give me Kansas with you guys as 3 and 4) play arguably the best game of the season at Phog Allen.

On top of that you had Buddy Hield being Buddy Hield, upsets, Virginia/Louisville putting on a God awful offensive performance and teams making statements. So, with that in mind a couple of thoughts from the weekend.

Follow me @barstoolreags for all your college hoops talk.

1) Johnny Jones should be fired

Look, this guy makes Rick Barnes look like a Goddamn genius for failing with Kevin Durant, LaMarcus Aldridge, Avery Bradley and other NBA stars. Johnny Jones finds ways to lose with Ben Simmons (the best talent in college hoops) and a supporting cast that is more than above average. LSU was up 10 with 11:32 to go at home against Oklahoma. This is a game that LSU should have won, but what happened instead? Jones doesn’t have Simmons touch the ball the last couple of possessions, deferring to an offense that can only be described as dogshit. On top of that after Oklahoma took the lead with almost 4 seconds to go, Jones didn’t get a timeout call (letting his players know to call it) instead settling for a scrambled last shot. Simmons has to be involved in the offense down the stretch, whether he’s a decoy or touching the ball. He can’t just stand in the corner. Jones, despite having NBA talent on his roster, has yet to win a NCAA Tournament game and only qualify for the tournament once. Right now, it looks to be the same way.

On the flipside, the way Kruger designed the game-winning shot with Buddy Hield as a decoy was magnificent. With 20 seconds left Oklahoma inbounded the ball to Isaiah Cousins, and put Hield at the free throw line. With a shooter in Jordan Woodard in the corner and your two big men down low, it looked like the ball was about to go to Hield on an Iso play, with the chance to kick to a shooter. Instead Hield came up to set a screen on the left side, faked it into a flair cut making LSU hesitate for a second. This allowed Cousins to get a step into the paint with an easy jumper for the win.

Besides some of the rule changes, the smartest thing college hoops did was have the SEC/Big 12 Challenge this past weekend. It’s one of the only weekends where there’s nothing to challenge the game. Going forward they should showcase their sport the week before the Super Bowl. Have Kansas/Kentucky always play that weekend, move some of the challenges around to where the nonconference games are happening. Give us the ACC/Big East Challenge, the Pac-12/Big 10 Challenge along with it. It’s the perfect chance for casual fans to get more into the game with no other sports on.

4) Kentucky has Found Themselves

After two horrendous losses to Auburn and Ohio State, everyone seemed ready to write this Kentucky team off. However, they have seem to turn the corner and look like a top-15 team again. This team reminds me a ton of the 2010-11 team with Brandon Knight, which went 22-8 and 10-6 in the SEC before making a run to the Final Four. The biggest difference is the move of Derek Willis into the starting lineup. He’s been able to help stretch the floor, giving more of a drive and kick feel while letting Alex Poythress go 1 on 1 in the paint. Watch what happens this week when they go on the road to Tennessee then host Florida on Saturday.

Dillon Brooks Got Put on Skates, Gotta Finish the Shot

Look, that was a disgusting move. But, it doesn’t count. You have to finish the shot in order to talk shit. That’s why this by Randolph Childress will always be the dirtiest play in college hoops, you can’t tell me otherwise.

The line is weird here with UNC getting a point at Louisville, just a couple days after the Cardinals scored about 8 points against Virginia. However, this is the first time the Tar Heels will be challenged in ACC play. They’ve had the Indiana schedule where their early games were against the weaker opponents, that’s not saying UNC isn’t a good team, just a little inflated win totals as of right now. The one thing both these teams have is a ton of depth, going at least eight deep in the rotation. There is also a ton of size in this game, with Louisville playing four guys over 6’9” and UNC playing four as well. The tempo of the game will help Louisville, which struggled with Virginia’s slowdown, methodical play. Carolina wants to push and get the ball up the court as fast as possible. That’s exactly how Louisville likes to play, especially with the trapping defense. As it’s been all year for Carolina, the key is going to be to stop Brice Johnson. If Louisville can limit the offensive rebounds and throw different matchups at him to make him think more, they’ll have a shot to win. The problem is Johnson has been so damn good this year. Give me Carolina by 5 in this game.