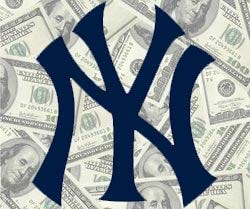 January 16th, 2015 is the last time the Yankees signed an MLB free agent and unless something unexpected happens, this will be the first time the Yankees have ever gone an entire off-season without signing a free agent at the MLB level. Free agency has only been around 40 years, while baseball has been around for over 100, but for the Yankees to have no activity other than rumors about Jeff Samardzija and maybe being the mystery team for Cespedes is quite a change from the norm.

There have been some minor league deals signed by guys that will see time at the big league level, but Brian Cashman has improved this team solely though trades.  By picking up Chapman, Hicks and Castro, we’ve upgraded at three key positions without committing big long term money, right before the books come clear. A lot of fans will complain that after just making the playoffs, we should be pumping more into the team to stay competitive, but Cashman has found a way to do that without spending.

If you take into consideration that Didi and Eovaldi were also trades last year, you can see that Cashman and the organization have a plan to get younger and cheaper in these first years after Jeter, while staying in the hunt. Big money is coming off the books over the next 2 years with big talent coming up in Judge and Severino. If those guys can deliver while we get under the luxury tax, we will be competitive in the AL East every year, before opening up the checkbook for another dynasty. Led by Bryce Harper…

PS: Blind Mike is trying to lose 40 pounds by opening day and just weighed in at 246. If he doesn’t make it, hes getting a Yankees tattoo.