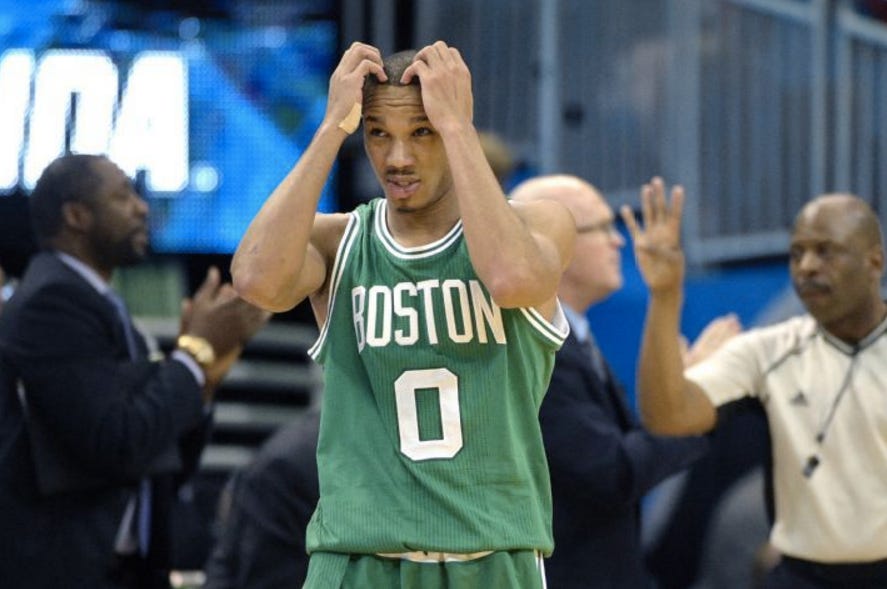 If there is one thing the 2015-16 Celtics love to do it’s lose to bad teams. They love it. So much in fact, it’s happened four times already, and is the one thing truly holding this team back. As a young team, when games like this happen on the road, it’s all about how you respond. The Celtics chose the collapse card. Not ideal. With losses to Brooklyn/Orlando (twice)/Lakers and a down to the wire game against Philly, this has officially become a thing. This is the difference between a 31-18 record which would be right with Toronto for the 2 seed. Instead, we live at 27-22 (still good).

It’s these inconsistencies that show how much more this team has to improve. The good teams in this league don’t drop games like this or any of the previous three. On one hand, coming off five in a row, having just played this team two days prior, this is understandable. It’s not surprising that Orlando would give a better effort this time around, as home and homes are always tough. But here’s the frustrating part. They didn’t. Instead, the Celtics decided to play the exact opposite way of Friday in almost every way, and as a result, drowned in the wave of momentum that was the Magic 4th quarter. Let’s dive in.

– What a beauty it was to watch Mrcus Smart last night. A career night if you will. He was absolutely spectacular and was by far the Celtics best player. In 28 minutes, he shot 8-16 (5-9 form three) 26 points 5-5 from the FT line 5 rebounds 3 steals and a handful of HUGE TESTICLE plays. Smart is a unique player in that he simply has no quit. Every second he is on the floor, he is competing at 100%. That’s what I want from my supposed young building block. In just his second year, he isn’t afraid to take the big shot at the big moment which I also like. He made some big boy FTs down the stretch of this game, and that’s great to see. You want to impress me, make your FTs.

Didn’t I mention how awesome the Celtics are at end of quarter plays?

Even once the game was starting to turn, Smart didn’t let up. I loved his pressure and steal on this play in the third quarter, which pretty much sums up who he is as a player. In your face all the time. And finally, with the game pretty much decided, he still didn’t quit and made that ridiculous three point attempt that was more likely than not 100% luck. But whatever. Despite the loss, I’m chalking this performance up as a huge win for those of us who are team Marcus Smart. This kid is going to be real real good.

Marcus Smart didn’t go down without a fight last night, making him the @HRBlock Clutch Player of the Game.https://t.co/xk6BPbGonQ

– You wouldn’t know it by the final score, but the Celtics actually started this game pretty well, especially Isaiah. Between the outside shooting of Smart and Thomas (6-8) the Celts dropped 32 points in the opening frame and looked poised for another blowout. Their defense caused 5 turnovers, and was giving both Oladipo and Vucevic fits.

– I thought Amir Johnson brought good energy in his 27 minutes. While he struggled defensively there was a stretch in the third where he did his best to keep the Celts afloat. I’ll take 8/11 from him on a nightly basis.

– A team that prides itself on defense, we saw the type of advantage having strong defense can give, when it comes to pace of play. When the Celtics played good defense, it allowed them to push the ball and create easy scoring opportunities. A 24-8 advantage in fast break points, the Celtics for the majority of this game dictated the pace, they just couldn’t maintain it.

– Where to start, where to start. I suppose the obvious, blowing a 14 point lead. The Celtics had been something like 32-3 when leading by 11+ so yeah, I’m a bit surprised they dropped this one. Even if you want to argue that such a lead was probably not sustainable given the environment, then how about a 5 point lead with 6 minutes to go. The Celtics down the stretch were not the aggressors, they reacted instead of enforced, and it showed.

– It all starts with their defensive effort. Something that was THE reason for their winning streak was nowhere to be found after that first quarter. See for yourself

That’s not good if you couldn’t tell. Bad shots on the offensive end lead to easy buckets for the Magic, and the Celtics did a horrible job guarding the three point line when it mattered most. Giving up 119 points was their highest total since Jan 12th when they lost to another bad team (Knicks), shocker.

– Here’s the thing, I don’t understand why the plan wasn’t, “just do the exact same thing you did on Friday”. You see, in that game, the Celtics took just 24 three pointers, played inside out winning the battle in the paint, and had a high assist percentage. Last night, they decided to take the third most three point attempts in league history, which guess what, didn’t work. They simply aren’t good enough shooters to be taking this many threes. Some were open, but most were forced, as an attempt to stop the bleeding but in fact created bigger wounds.

Playing this style meant they ignored the paint. Unlike Friday’s win, Orlando dominated scoring inside, a 46-32 advantage. Combine that with the abuse they caused on the glass (50-41) this isn’t really all that surprising.

– To be honest, the Celtics were lucky this game was even close. Orlando missed 14 FTs in this game (21-35) which after taking 29 on Friday, finally cost the Celts a game.

– Aaron Gordon murdered this team in that second half. Hurt on a deeper level for your boy. Fuck UofA.

– Tough stretch at the 5:26 mark in the fourth quarter. After Fournier made that three to give the Magic a 95-96 lead, in the blink of an eye, by 3:27, the lead was 102-97 after another Fournier three and that was that, the Celtics were broken.

– In the midst of the collapse, Evan Turner got ejected. Must have been what he was saying because he didn’t act all that crazy, but it just goes to show you where the Celtics composure was at this moment. The Celts had just blown a game, were down 102-111 with 60 seconds left, and Turner let his frustration show. His play wasn’t terrible, but this was not a good look by him.

– I’m not over it, WAY TOO MANY THREES

So as I feared on Saturday, the Celts made everyone come back down to Earth a little bit. That’s OK, they are playing so great recently I’ll allow a little hiccup. There are some teams that just give the Celtics problems and Orlando is one of em. Luckily they won’t be making the playoffs. For me, the big question comes tomorrow at MSG. The Knicks just got blown out by GS so they are going to be motivated, and they put up 120 last time we played them. If the Celtics want to keep heading in the right direction, they can’t drop back to back games against Orlando/Knicks.

Shake this loss off and get ready, because we are about to get Olynyk vs Godzingis III 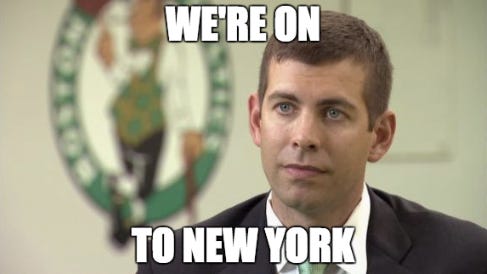 Yesterday Nerlens Noel followed me for about 30 seconds. To the untrained eye this probably means nothing, but with the trade deadline a few weeks away I felt that this was information I had to pass along. I see you Trader Danny…I see you.