I’ll be the first to admit that before this past weekend, I couldn’t care less if John Scott played in the NHL All Star Game or not. It wasn’t that I didn’t want him in the game, it’s just that I didn’t think it made a difference if he was there or not. But after the past 48 hours, I realized that I’ve never been more wrong in my life. After everything that had transpired in this bizarre John Scott vs the NHL saga, I truly believe the game is better. Watching the entire hockey world, players and fans alike, rally behind John Scott was one of the more memorable moments in my life as a hockey fan. And the fact that everything went so right after the league handled it so wrong is what makes hockey such a beautiful game.

Heading into this event, John Scott already had the respect of his teammates and his peers. But to see the way they were all so genuinely happy for the guy and genuinely proud of him all weekend long was truly special. They all realize how difficult the job of an enforcer in the game of hockey is and they wanted to make sure that John knows how much they appreciate what he does. These are the best players in they world. They’re superstars. And when you’re dealing with players of that caliber, it’s easy to lose the team concept of the game. It’s easy to see a guy like Steven Stamkos and credit all of his success to just how talented he is. But he doesn’t get to be the player he is without tough guys on his team who are there to make sure he’s comfortable when he’s on the ice. There to assure him if anybody even looks at him the wrong way, they’ll end up taking a few fists to the face. And that’s what guys like John Scott do. Just being in the locker room makes the star players feel more at ease and it’s great to see how much those guys appreciate that role. I think this tweet for Marty St. Louis sums it up perfectly. 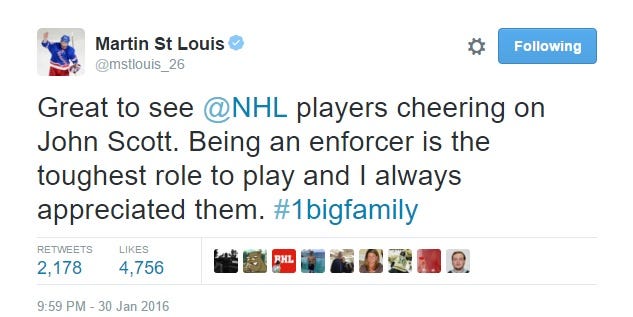 Enforcers are always under-appreciated for the tough work they do and it was great to see John Scott be able to not only soak in the experience of being an All Star in the NHL, but to become a hero of sorts and a story line that the entire game of hockey can be proud about.

I just don’t think that any hockey fan could be happier with how that weekend went. To see the NHL handle this entire situation so incompetently and then it ended up working out so perfectly… well you just can’t make that stuff up. I’m sure that most people went into it hating Scott for being the type of player he is, but left with a new-found level of respect for not only John Scott but for the role of enforcers in general. To see him score those two goals was amazing. To see him have fun and “fight” Patty Kane after his goal was amazing. To see him win the million dollar prize and be voted as the All Star Game MVP was amazing. And to see him stuff Jeremy Roenick in a locker was whatever word means more than amazing.

This lovable goon captivated the heart and soul of hockey fans everywhere. In what started out as a joke actually ended up being a modern day Rudy story. Only better because this Rudy is 6’8″, beats the shit out of people and wasn’t offside.

Outside of just John Scott, the entire weekend was a success. The 3-on-3 tournament format was terrific. The city and fans in Nashville hosted the shit out of this weekend. There was plenty of entertainment. There were only a few dickheads like Mike Milbury who were bringing down the vibes. All in all, it was probably the best All Star Weekend in the past 15 years. That was fun and we should do it again sometime. 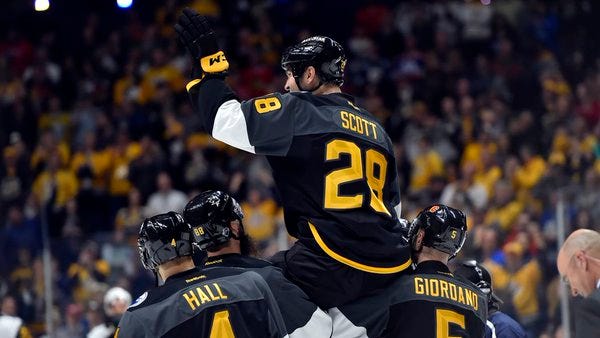 What a weekend. Now let’s get back to some actual hockey.