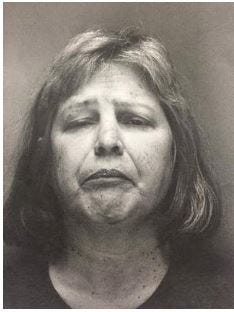 ROCK HILL - A Rock Hill woman was charged with aggravated domestic violence after assaulting her husband with nunchucks, according to Rock Hill Police. The victim said he was watching TV in the living room when Sondra Earle-Kelly, 51, “came in and asked him to go to bed with her,” the report states. Kelly, who had reportedly been taking Xanax that night, became irate when the victim said no, and began throwing ceramic figurines at him. The victim told officers Kelly “kept coming at him, assaulting him with whatever she could pick up.” He showed officers wounds on his arms that appeared to be defensive in nature. Kelly then picked up a pair of nunchucks and began hitting him, police said. The victim said she hit him several times in the face and head.

First of all I don’t think anybody who has nunchucks lying around in their house should be allowed to call 911. That’s a social contract you sign when you buy nunchucks. That means you live in the shadows. You don’t believe in the rule of law. Like ninjas don’t call the cops and neither do people who own nunchucks. However having said that it’s almost like this lady didn’t even know how to use them. Who hits somebody with a nunchuck. You throw nunchucks. QUICK UPDATE – I thought nunchucks were Chinese Stars. I kind of got the feeling I was wrong half way through writing this and googled it and it turns out I was wrong. However I already wrote this blog and I’m too lazy to change it so the blog stands. Deal with it.