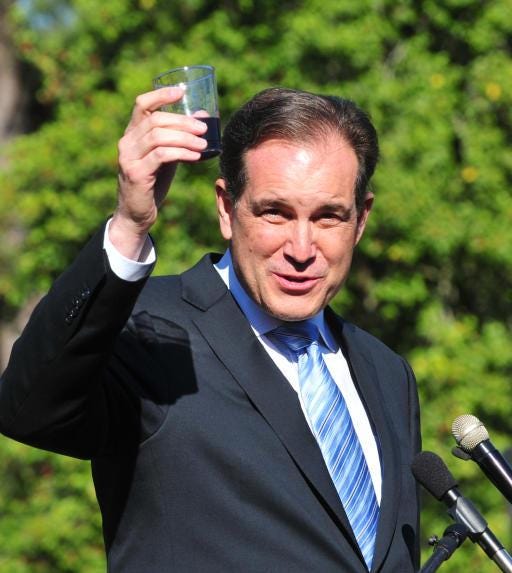 (SI) – CBS Sports broadcaster Jim Nantz has big plans for the back nine of his career. During an extended interview with Sports Illustrated running on Sunday, Nantz said his broadcasting goal is to work 50 Masters tournaments. He has been part of his network’s coverage of that golf major since 1986. “Knowing that the Masters always ends on the second Sunday in April every year, I looked it up: My 50th Masters would be April 8, 2035,” said Nantz, 56. “So I thought that would be the day I would retire.” But Nantz said his goal changed after an after-dinner conversation with one of his mentors: the famed sports broadcaster Jack Whitaker. Whitaker informed Nantz that he had to work 51 Masters tournaments because the 2036 Masters would be the 100th playing of the event.

2036, Jim? That’s when you want to retire? I’ve got bad news for you, friend, that’s a made up year and it’s never coming. Just say that out loud, “The year two thousand and thirty six,” and try not to laugh. It’s the funniest joke I’ve ever heard. People got on Brady for saying he wants to retire in, like, 7 years or something like that but this is a million times crazier. Not that it’s unheard of for a broadcaster to be in his late 70s. Heinsohn is 81 and still as sharp as ever, Don Cherry is the same age and also very sane, Vin Scully is almost fucking 90, so it’s not the age thing that really bothers me. It’s just the fact that Nantz is planning twenty years down the road. I don’t have a one week life plan, let alone twenty years. To just come out and say “I’d like to work until 2036 even though those numbers look ridiculous together” blows my mind.