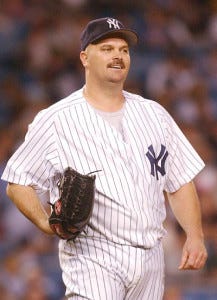 Post – Off the mound, nine years after his retirement, David Wells still is throwing heat. His target has changed, though.

The longtime big leaguer, who spent two stints in New York with the Yankees, with whom he won the 1998 World Series, came out firing on the Kardashian family Sunday morning while golfing.

The big lefty was hitting balls for ex-NHL’er Jeremy Roenick’s birthday when he transferred some dirty course banter to Twitter.

Golfing with my boy Steve and Roenick Jeremy has 2 holes he lipped out we call that the Kardashian putts. Nothing white goes in the hole.

That’s 3 now for roenick. He just made the all Kardashian hall of fame.

David Wells should be put in a museum because he is a goddam national treasure. His statistics themselves were not anything to put him in the hall of fame but, the way he enjoyed life being a ballplayer is something we don’t see anymore. With social media and TMZ an athlete can’t go out and get blacked at the SNL after party, then throw a perfect game the next day, like a man.

That’s why this situation sucks. Wells had 2 absolutely hilarious and topical jokes but had to delete them because rather than laugh at an almost totally factual statement, the media choose to take offense. People are bringing up the fact that he works for TBS and that there could or should be some kind of action from them but this really shouldn’t be an issue at all.

Aside from Kourtney, the Kardashians like fucking black guys. That’s their deal. They make millions and millions of dollars and jam black dicks inside them. Wells didn’t say there was anything wrong with that, he just made an observation that the golf hole was acting in the exact opposite way of all the Kardashian woman besides Kourtney and Caitlin. Although we don’t know which direction Caitlin is going yet.

PS: The media doesn’t need to worry about someone saying something mean about the Kardashians. They have Kanye now and if they’re offended, he will just ether someone in a verse. He’s like their Rico Bosco but with bars.