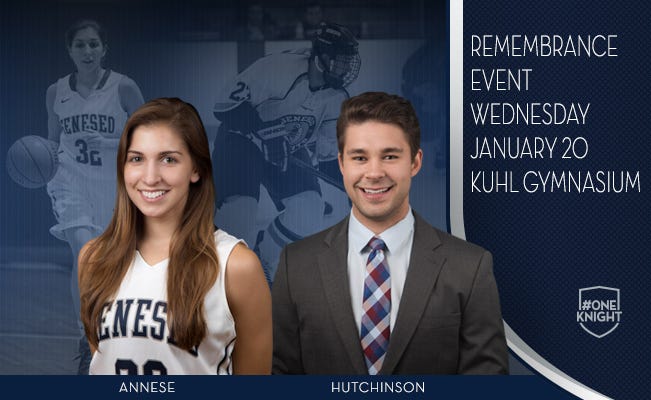 CNN (Geneseo,NY) – Three young people, all current or former student athletes at the State University of New York in Geneseo, were found stabbed to death in an apparent murder-suicide, police said Monday. Colin Kingston, 24, of Geneseo was distraught because his girlfriend of three years, Kelsey Annese, had recently broken up with him, Geneseo Police Spokesman Jeffrey Szczesniak said at a press conference. Early Sunday morning, Kingston telephoned his father and said he’d “brought harm” to Annese, Szczesniak said. The father called police, who went to Annese’s residence on the second-floor of a house converted into apartments that were mostly occupied by members of the women’s basketball team, Szczesniak said. Officers found the bodies of Kingston; Annese, 21, of Webster, New York; and Matthew Hutchinson, 24, of Vancouver, British Columbia.

The story of the tragic murder suicide is now a week old, and while it was and still is difficult to stomach every time I think about it, especially as a former college athlete, there has been some very touching tributes from the Geneseo Athletics community this past week.

I read about this story earlier this week, and was extremely saddened by it. As all things go in life, you forget about it a little bit as your own life’s problems get in the way, but over the weekend, I happen to see a mutual friend share a photo on social media : 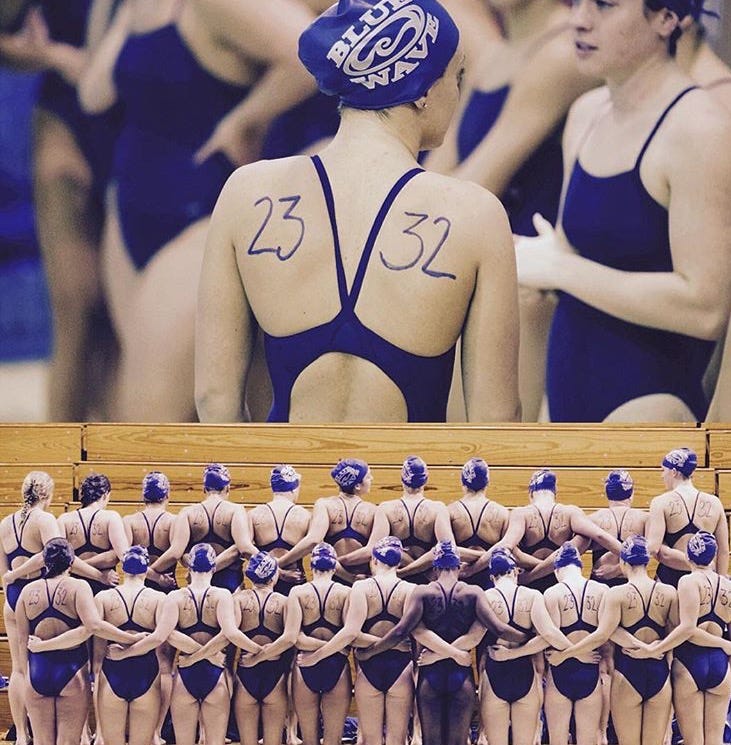 It’s SUNY Geneseo’s Swim team honoring the two student athletes lost. Turns out they knew one of the girls in the photo.  Similar tributes were made at the Men’s Hockey game,  and Women’s Basketball game. 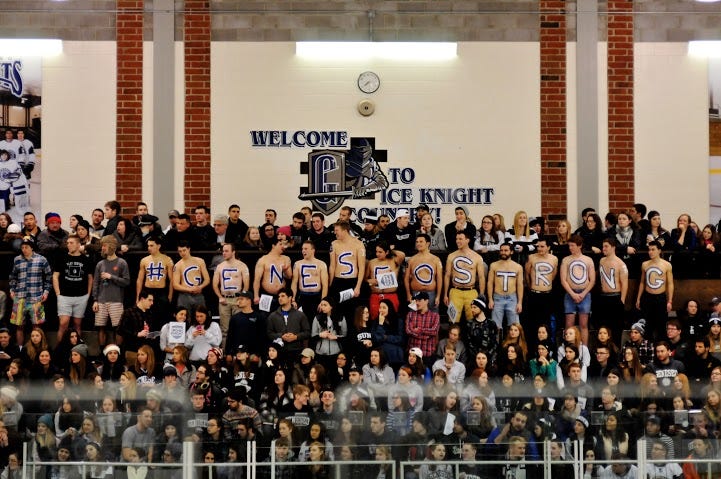 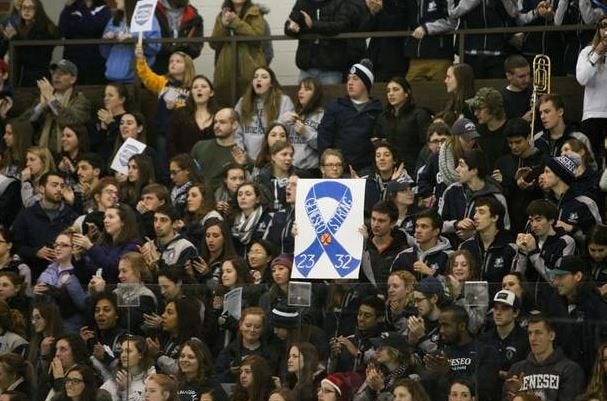 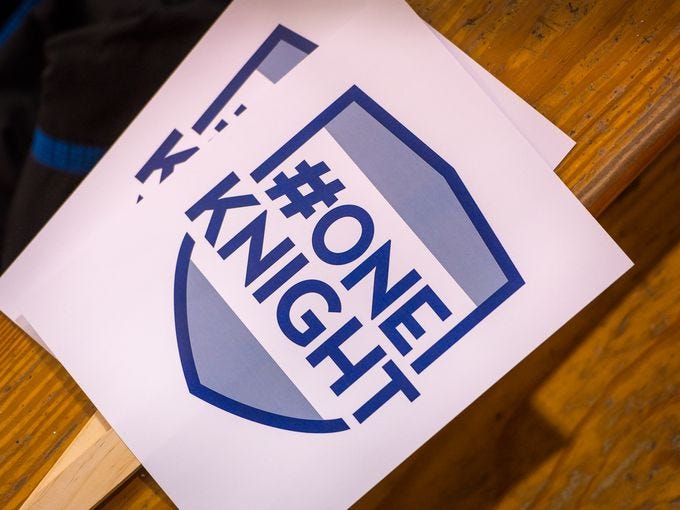 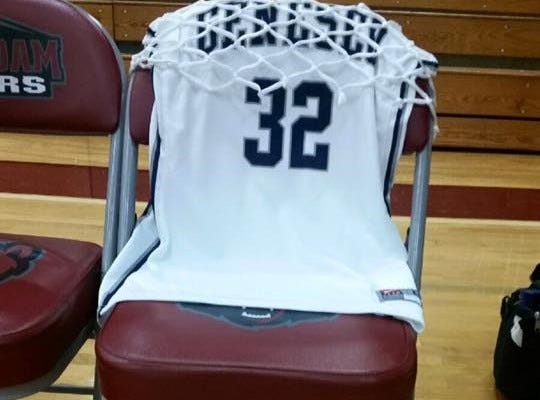 In a letter read at Kelsey’s funeral , her mother stated : “Kelsey may have seen herself as socially awkward, but in reality, she presented herself with poise and maturity. She was proud of herself and the accomplishments she made, however the intense pride she outwardly expressed was that for her brother, her sister, her cousins and her friends.”

A touching tribute on Facebook was written by a mother who’s sons had grown to love the Geneseo hockey team. One of the more impactful passages was :

” As soon as I told them, I realized just how much you each have impacted them. I am sad. Sad that a mother and father had to get that call. Sad for all of the families, friends, teammates and community members impacted. Sad for our friends who own that property. Of course, so sad for each of you. For your coaches, and your families, some of whom are too far away to come comfort you as I would want to do for my own kids. ”

Matt’s parents, Keith and Susan came in from Canada, and in a letter read to the campus at a memorial event said,  “I want to hear about that one (memory) when we come to see you all this weekend. We want to meet as many of you as we can when we arrive in town this weekend to pick up our beautiful little boy, hold him in our arms and bring him home.”

I have encountered a handful of people in my life who ask “why do sports matter so much to you?” Most of the time I give simple answers of “because I love it”, and “because it’s entertaining”, and truthfully I still have never given that question a full response. Likely because I have a few hundred reasons of why I love them so much, and the only other people who would listen to them all are sports diehards themselves. I may never answer that question the way it deserves to be answered, and I won’t today. But I will tell you that in times of tragedy like this, sports is one of the best outlets because it bands you together. Playing a game days after something this tragic is not possible by yourself, however when connected with a bond as strong as your teammates, it becomes easier. You never truly get over it, but you have people there to constantly help.

I can’t imagine the sadness of the players on the Geneseo Women’s Basketball and Men’s Hockey teams this past week. And there’s nothing I can say to make them feel any less worse than they did Monday morning when they heard the news. The only thing I can say is “thank you”. Thank you for being strong, thank you for showing resiliency, and most of all thank you for giving me the best example of why I love sports.; the bond of teammates. Your actions of honoring your teammates, while amidst a horrific tragedy, were some of the most beautiful things I’ve ever seen. Those who never played will never understand that teammates aren’t someone in your class who happens to play the same sport, they aren’t people you just meet with Tuesdays for practice, or someone who wants to gets some exercise. More often than not, teammates become lifelong friends tied to a period in your life. Teammates hold a bond similar to brothers and sisters.  I am deeply sorry for your loss, but I thank you again for the way you honored your lost brother Matt, and sister Kelsey. It spoke volumes about your bond with them. I send prayers to your teams, and your school.

“Fairness doesn’t govern life and death. If it did, no good person would ever die young.” – Mitch Albom