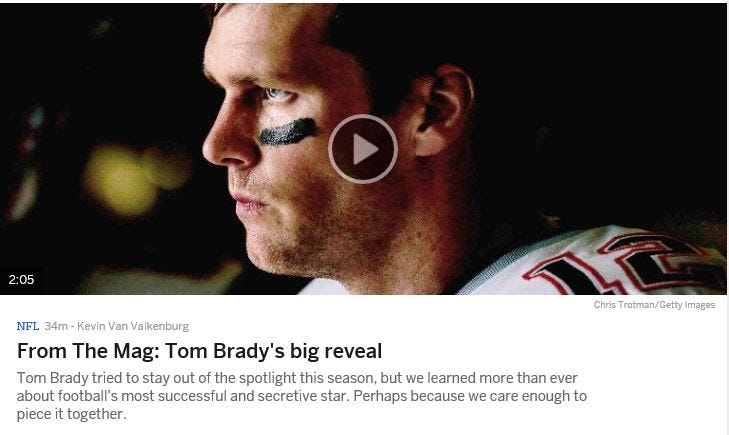 Click to Read The Article
So I’m sure everybody read that tremendous article on Tom Brady today on ESPN.com. What you may not realize is who wrote it. It is a gentleman by the name of Kevin Van Valkenburg. A man who lives up to that type of name both in honor and integrity. See one year ago Mr. Van Valkenburg was a certified Patriot hater. He was part of the Deflategate mob when the story was leaked/planted by the Colts and the NFL. 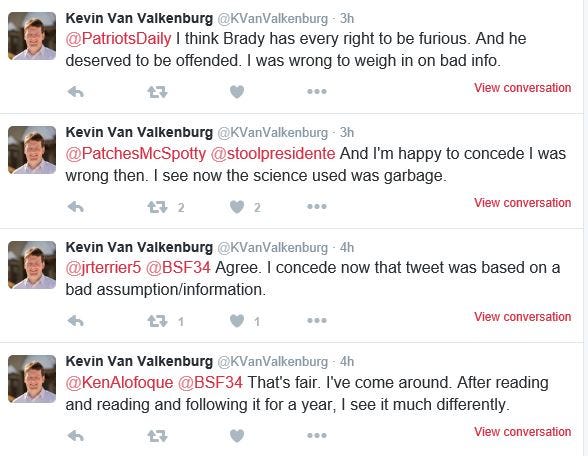 See this is what people don’t get about Pats fans. This is what people don’t get about me. We’re not a homers. We don’t blindly believe whatever the Patriots tell us to believe. We’re believers in the truth. We believe in justice. We believe in due process.  We believe in America. Kevin Van Valkenburg made a huge mistake. He was led astray by the NFL. He fell for Roger Goodell’s propaganda. He was used and abused by the system. But now he admits he was manipulated. He admits he was a pawn. He is embarrassed and ashamed by his actions and has thrown himself at the mercy of Patriot Nation begging for forgiveness. He wrote a beautiful article on Brady extolling his virtues. To quote Rocky IV I guess what I’m trying to say, is that if Kevin Van Valkenburg can change, everybody can change! This is all Patriot fans wanted. Written apologies from Mike Kensil, Chris Mortensen, Felger and Mazz, Bob Kravitz, Sal Pal, Mark Brunell etc. All of them to admit what jerks and assholes they were. How naive and dumb they were. How Patriots fans were right all along and deserved to be so mad. Listen being wrong isn’t the crime. Refusing to apologize and admit the error of your ways is. The rest of ESPN and journalists everywhere could learn a lesson today from Kevin Van Valkenburg.  If people admit their sins we will forgive. Grovel for forgiveness and kiss our feet and we will spare you.  If you continue to pursue personal grudges and agendas we will crush you.