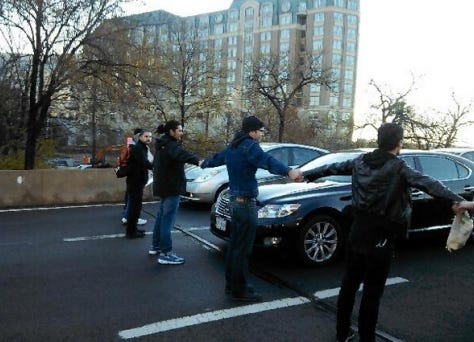 WaPo - A police sergeant in St. Paul, Minn., has been placed on administrative leave after he allegedly posted an inflammatory statement online, telling motorists to run over Black Lives Matter “idiots” participating in a march on Martin Luther King Jr. Day. “Run them over,” Sgt. Jeffrey M. Rothecker allegedly wrote on Facebook, according to Fox affiliate KMSP. “Keep traffic flowing and don’t slow down for any of these idiots who try and block the street.” In a statement Tuesday, the department said it is “actively investigating” the comment, which, it noted, “may have been written by a member of the SPPD and posted on Facebook.”

He was suspended? Did I read that right? Administrative leave? Did they misspell “given a promotion, raise, and awards banquet”? We need more cops encouraging people to run these assholes over. It’ll only take a couple of times for some fucking dickhead who is stopping people from getting home from work to die until they realize the middle of the street isn’t the best spot to protest. As much as this type of thing used to happen, and still does, it’s shocking, and sad really, that more of these selfish, self-serving assholes haven’t been run over. Stand in the road all you want, but if I’m a guy who just worked 8-6 and just want to get home, put a frozen pizza in then oven, pop open some Miller Lites, and watch a hockey game, you better believeeeeee you’re winding up under my car if you don’t get out of the way.

Look at this picture again:

They don’t even have to run over the protesters at full speed, but if they can edging up, edging up, eventually the cars will win. We, as citizens who aren’t complete selfish pricks that stop normal people from going about their lives, need to take our own stand and run these people over, otherwise this cop was suspended for nothing. #TeamRunProtestersOver