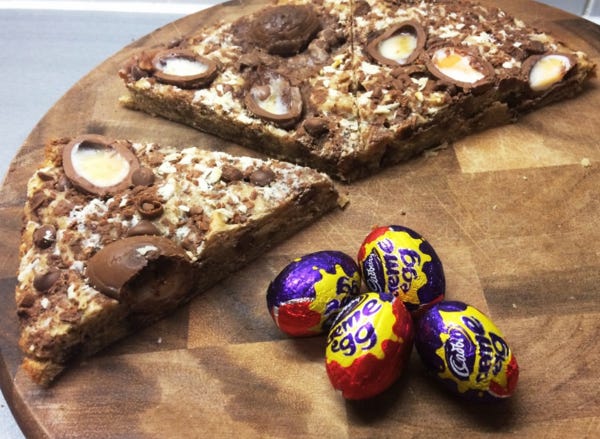 Foodbeast- Cadbury, the chocolate and candy company, born and raised in the UK since 1879, is about to give everybody in London diabetes with their new Creme Egg Cafe opening on January 22.  The cafe will be a pop-up, meaning it will only be around for a short time. Cadbury plans to close its doors on March 6, though reopening them again in another location at a later date is not out of the question.  The cafe will be comprised of three floors, each offering a glimpse into the world of Cadbury and its endless possibilities.

The first floor will be simple, selling Creme Egg Toasties for people on the go or simply trying to fuel up on some creamy, chocolatey sugar before work. For those who don’t know, a toastie is basically the British version of a panini. Traditionally, the edges of the toastie are grilled into each other in order to seal the contents within the sandwich, keeping the contents warm and your fingers clean(er).

The second floor will feature the main restaurant, offering all creme egg-based dishes along with tables that can be reserved, and should be, considering how packed the restaurant will be from open to close. Walk-ins will be allowed, but availability will be an issue, so they are not recommended.

The third and final floor will simply be a ball pit for people to splash around in when life gets them down. Frankly, it’s a genius move by Cadbury, since people will now have a place to expel all the energy they’ll have after eating any of the sugar-packed meals available to them.

Jesus, London, where the hell did this come from?  England goes from the most boring, bland restaurants on the planet to a Cadbury Egg cafe.  And not only that, but one with a ball pit inside for adults? Dreams do come true.  That is some serious Willy Wonka shit right there, Cadbury.

As I have said in the past, both types of Cadbury Eggs are the kings of the holiday snacks and not selling them year-round has been Cadbury’s biggest mistake.  But combining them in some unholy alliance with a bunch of complex carbs is a diet-wrecking nightmare.  And I respect the hell out of it.  New Year, new you?  No, fuck that.  You are going to nuke that diet and good eating habits with a Cadbury Egg pizza.  Throw the gym membership in the trash and hope 2017 is kinder to you.  Only being open a limited time is such a dirty move, too.  You want what is likely the tastiest thing in the world?  Just drop whatever you are doing because we are only open a few weekends.  Kinda like when McDonald’s starts up Monopoly.  I know I probably won’t get Boardwalk and Park Place, but I have to indulge while I have the chance.  Now we just need someone to bring this cafe to this side of the pond and Americanize it.  Maybe a Reese’s cafe with some ball pits and hot tubs?  If that happens, there is no telling for how high we can make the price of insulin go.