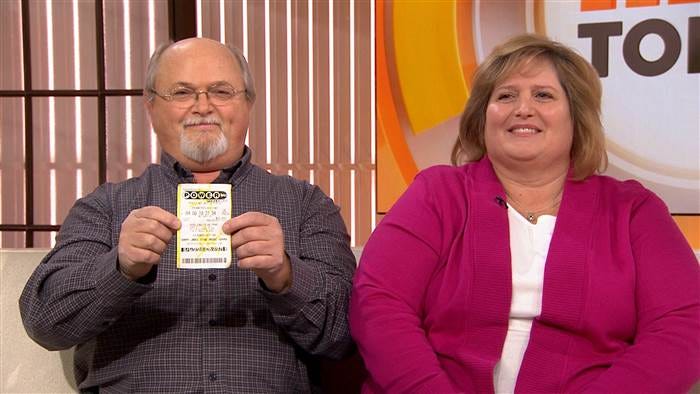 Fair warning, this is gonna be a rant blog about how stupid I think these two are

Today – Amidst nationwide Powerball hysteria over the biggest jackpot in history, a Tennessee family has come forward with a ticket that is potentially one of the three winners from Wednesday’s colossal $1.6 billion Powerball drawing. John Robinson and his wife Lisa bought four tickets at Naifeh’s Food Mart, a grocery store one block from their home in Munford, Tennessee, at 6:56 p.m. on Wednesday night. Robinson, a father of two, said he bought the four tickets as he always does to represent the four members of their family, with the computer choosing the winning numbers of 04, 08, 19, 27, 34 and Powerball 10. “Actually, (I was) a little scared because I didn’t know exactly what do to,” John said in an exclusive interview on TODAY Friday. “I knew that I wanted to get an accountant. I knew that I wanted to get a lawyer and try to follow the procedures that they tell you to follow.”

The prize is roughly $533 million before taxes, and $327.8 million if they choose the lump-sum payment. “Now I’ll be nervous because everybody knows,” John said. His potential winning ticket has not yet been verified by Tennessee lottery officials, but news outlets have reported that one of the winners was sold at Naifeh’s in Munford along with one each in Florida and California. The couple sent copies of the ticket to NBC News, which has done a background check on them and worked to independently verify their ticket as the winner. The law in Tennessee stipulates that the winner has to come in person with the ticket in their hand and identification of the person who bought it, which the Robinsons have not done yet. They planned to go to Tennessee lottery officials after appearing on TODAY.

Lisa, who works in a dermatologist’s office, said she still plans on working despite the potential life-changing winnings. “I’ll be there Monday,” Lisa said after calling her supervisor to tell her to tune in to TODAY. The family then reached out to a friend for financial advice and was put in touch with Joe Townsend, an estate planning and tax attorney in Memphis who had the idea for them to reveal themselves on TODAY. “I think the American public wants to hear from them, and even though they want to be private after this is over, they want to let the public know that they’re the winners,” Townsend said on TODAY. Townsend, who is a big TODAY fan, had his daughter, Eileen, reach out to the show to see if the couple could make the announcement on Friday. The Robinsons had only told only their son, daughter, two brothers and mother-in-law about their potential windfall before Friday. They said they plan on staying in Munford in their current home.

There’s so much stupid shit in this winning lotto story that it’s tough to unpack it all. Granted, a lot of this hostility probably comes from not winning the lotto, but I’m having a tough time seeing these people as anything other than idiotic or psychotic. Let’s start with the whole flying to New York idea. Traveling with your piece of paper that’s worth millions of dollars seems really really ill advised. This guy’s walking around with it in his shirt pocket like it’s his Applebee’s receipt. I wouldn’t be surprised if he put it in his check bag either. Jet setting around with your incredibly valuable 3×5 piece of flimsy paper is just stupid.

You know what makes all that travel even more dangerous when you have an unclaimed lotto ticket? Telling everyone you’re doing it. In the interview the guy said he’s nervous because everyone knows about the ticket now. No shit, dude! That’s your doing! You just put your face next to an unclaimed five hundred million dollar ticket on national television. Now, I know that I can’t steal that ticket from them and turn it in. I’m not going to rob these two because it wouldn’t work and everyone would know what I did (and laws and conscience and morals and shit). But you know who doesn’t get that? The stupidest segment of the population absolutely doesn’t get that. These are the people who need to start Go Fund Mes because they spent all their money on tickets assuming they would win. These are probably the people who watch the Today show. I assume some of these idiots are armed and in New York City. Why would you entice them like this? Hell, if these two don’t get stabbed over that ticket, I might just have to do it on principle.

Oh, and I’d be remiss if I didn’t mention their new tax attorney who recommended that they go on the Today show before turning in the ticket. Even though that’s stupid for all of the reasons listed above. He seems like a winner. Guess who got to go on the Today show too? That guy. He’s a huge fan. The guy advising air travel and notoriety prior to you cashing in on your lotto ticket is either a moron or  not looking out for your best interests or both. Good thing he’ll be managing that money.

To cap it all off, the wife is just going to go back to the dermatologist’s office on Monday. That is if her and hubby can get Snake Plissken to help get them out of the city alive. Going back to your menial desk job might be the definition of insanity. You can’t work with those people anymore. First of all, they’ll all secretly hate you and want your money. That’s just for starters. The actual part of work where someone tells you what to do or when to come in has to go right out the window too. You can’t be told to put away a file by some doctor when you have a bazillion more dollars than he does. If even one aspect of your job is annoying, you should quit that job. Why would you put yourself through that when you have that kind of money? That would be crazy. And I think that’s the crux of this incredible series of bad decisions. These people might literally be insane. Good for you, wackos! I hope you don’t get murdered (kinda sorta).