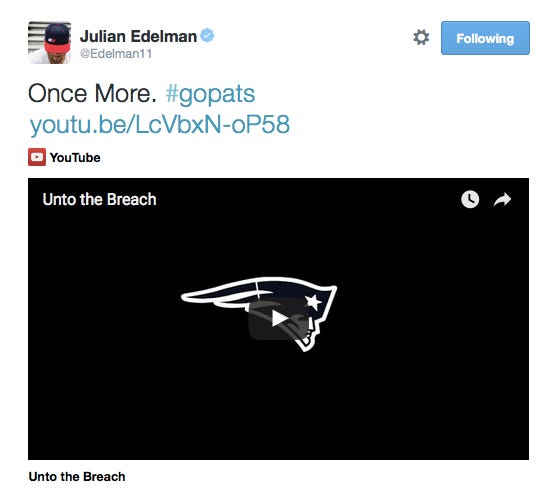 Well I usually don’t start my pre-game playoff ritual until 24 hours before kick-off but since Julian just tweeted this I guess we’re kicking it off a little early this year.

25 hours and 57 minutes: Watch a clip from Henry V because Edelman keeps saying “Once more unto the breach” and be so proud of yourself that you ever read Shakespeare in high school because you understand more Spanish than Shakespearean Enlish now (lol jk, you read Cliff Notes).

25 hours and 50 minutes: Back to pump up videos. Work is done for the day. It’s all about getting amped now.

22 hours: Drive home, listen to Felger and Mazz. They help you keep your edge up. Continuously punch your steering wheel and scream that they’re fucking morons and the Patriots are going to win by a million.

20 hours: Heavy dinner. Really heavy. Carb up. Lay a thick base in that stomach because a marathon is about to begin. You’re about to become a drunken ball of energy for the next day and you can’t be sure when your next meal will come. Watch last years Super Bowl DVD. Eating with a boner isn’t weird, I swear.

6 hours: Wake up. Grab a beer. It’s gameday, we need you in tip top shape. The team needs you. If you’re not well hydrated then they can’t win, Tom Brady said that.

4 hours: Watch NFL Countdown. Yell at the TV a lot, they’re talking about Chandler Jones too much and not enough about Peyton Manning.

2 hours: Pushups. Like 1,000 of them. Get the blood going and the veins pumping. Stop frequently for hydration breaks.

Gametime: Tweet a lot of nonsense about how we’re the best and everyone sucks. Mix in an original one if you can, something like calling Andy Reid fat and say he looks like the Hawaiian Punch guy in that jacket. Don’t remember anything, you’ve overserved yourself.

After postgame nap: Wake up, watch highlights. We won! Tell the rest of the NFL to suck our dicks and tweet Roger Goodell that this is his fault, he made us do this. Get ready for Denver.