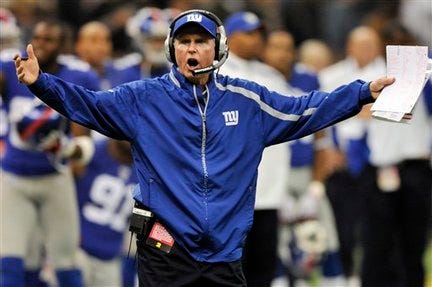 Ugh. Again, I respect the FUCK out of old coot Coughlin. If you don’t give the man credit where credit is due he would backhand you with his 2 rings like a man to his 50’s housewife after a rough batch of coffee (not saying smacking the woman around is Tom’s cup of tea but he does come from the Sean Connery generation). But the man will be 70 in August. 70!!! I’m not saying that’s too elderly to coach now, but what about 3, 4, 5 years from now? You don’t want to age discriminate but let’s call a spade a spade – How is this guy going to handle the 24/7 hardships of running a NFL team when we are going to be drawing straws to see who has to take his car keys away from him?

Unfortunately hiring Coughlin would still mean Lurie and Howie have been caught with their pants around their ankles with their coaching search. No planning whatsoever. If they did want Tom Coughlin that bad, why did they let him interview in San Fran? The ONLY way I see this working out in the team’s (and the fan’s) favor of being half decent in the future is if Coughlin surrounds himself with people who can run the show. Ideally that means Schurmur at OC w/ Bradford at QB and Lovie Smith at DC. That way Tom’s only responsibility will be to mean mug the fuck out of everyone in between naps. Even so, AGAIN, the Eagles aren’t doing dick until that snake of a salesman Howie Roseman is out and a proven GM/talent evaluate is in his place. This whole thing stinks to high heavens.

Hopefully Coughlin doesn’t like the way Howie and Lurie are trying to coerce him with bread pudding and tells them to fuck off.

Oh, and Chip Kelly was 4-1 vs. Coughlin’s Giants. He also had a NFC East title while going 26-21. Tommy was 19-29 in the last 3 years. 0 playoff appearances. Plus this Coughlin hiring will outright eliminate the universally good, and innovate things Chip brought to South Philly. All the next level Sports Science stuff will be replaced by medicine balls from the 40’s and Brain & Nerve Tonic. Hard money’s on Cody Parkey developing gigantism.