Anybody else watch the games last weekend and think the New York Jets could have beat the Cincinnati Bengals or the Brian Hoyer interception machine? Unfortunately, it doesn’t matter at this point so let’s dive into your off-season questions and give divisional round picks. Thanks as always for the questions on Twitter and you can find further Jets analysis in the coming months here. 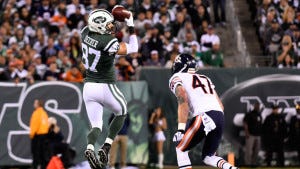 @TurnOnTheJets@BarstoolNewYork seriously, what happens if Geno comes in playing lights out in camp? It could happen…

Smith will be relegated to the backup role to start camp, as Ryan Fitzpatrick is more than likely coming back as the starter. If both Smith and Bryce Petty are playing well, the team is likely to explore if there is any trade market for Smith as a backup if there are injuries around the league. The return on that trade will not be much but you never know when and where injuries will hit league wide. If Smith is playing well but Petty isn’t, the team will be content to hang on to him as a backup and option if Ryan Fitzpatrick is struggling. At this point, it would be a big upset if Smith was starting at the beginning of 2016, unless injuries hit.

@TurnOnTheJets@BarstoolNewYork would jets draft a guy with re flags at 20? Think locker room/ coaches could handle/help player(Noah spence)

I think so. The new regime is working to build a culture that can handle a player or two with red flags. There are strong veteran leaders (Nick Mangold, David Harris, Darrelle Revis, etc) and a new coaching staff who demands much more accountability than the old coaching staff. Noah Spence would be nice value at the 20th overall pick and fill a major need for the Jets.

@TurnOnTheJets@BarstoolNewYork do you think revis will be able to keep up with the new up and coming WRs next year?

I think the days of Revis being able to individually cover the league’s best wide receivers are probably finished. However, that does not mean he cannot be a very good to great player in this defense. First off, not every team in the league has a DeAndre Hopkins or Sammy Watkins. Second, Revis can work in zone or with help over the top in those situation. Third, the Jets may decide to use Revis the way New England did. You put him on a team’s second best receiver and double their top receiver.

@TurnOnTheJets@BarstoolNewYork if snacks goes to another team who plays his role?

No easy answer. Snacks is a uniquely talented player against the run. However, keep in mind he only played 52% of the team’s defensive snaps in 2015 so you can only pay so much for him. If he moves on, the Jets will could add a new nose tackle in the middle rounds or hope last year’s 7th round pick, Deon Simon, takes the next step forward. They would also likely add a low cost veteran to help eat up some of the reps and get creative with their other defensive lineman (Muhammad Wilkerson, Sheldon Richardson, Leonard Williams) in certain formations.

I don’t think it will play out like that because teams know the Jets are just going to cut Jeremy Kerley, who has very limited, if any, trade value. Davis is an interesting name because he will be cheap and does help the Jets woeful return game. I’d expect Chris Ivory to walk this off-season, Bilal Powell to be brought back and for the team to strongly consider adding a running back on day two or day three of the NFL Draft. One more intriguing free agent to keep an eye on is Lamar Miller, who has been criminally underused in Miami.

Patriots (-4.5) vs. Chiefs – You can make a reasonable argument that Kansas City is built to keep this game close and at least cover but gun to your head are you taking Andy Reid/Alex Smith over Belichick/Brady in New England? I’m not.

Cardinals (-7) vs. Packers – I think the Cardinals cover this pretty easily. The Packers beat a mediocre Redskins team last week, don’t let that throw you off the scent of how much they have struggled recently. Arizona is a much better all-around team.

Panthers (-1.5) vs. Seahawks – Seattle will be a popular pick this week but they needed a miracle to advance last week and are coming off playing a physical game on a frozen tundra, while Carolina has had an extra week to rest. The Panthers were 15-1 for a reason and Seattle recently lost to St. Louis and barely scraped by Minnesota for a reason.

Broncos (-7) vs. Steelers – Unless Peyton Manning melts down, the Broncos should cruise here. Pittsburgh is just too banged up and limited as a team if Ben, Antonio Brown and DeAngelo Williams are all not at 100% and/or not playing.