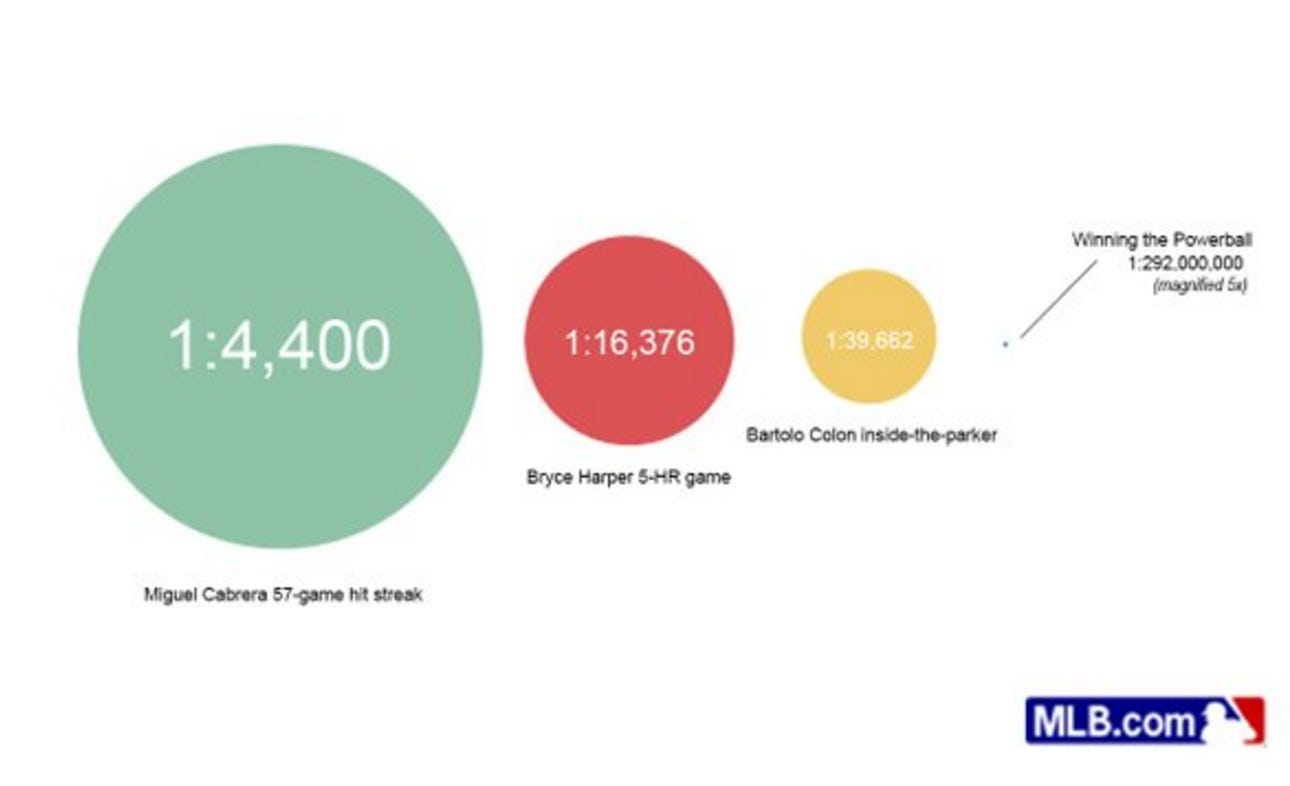 Bartolo Colon getting an inside-the-parker

Listen, we’ve all dreamed of the day Bartolo hits any kind of home run. But he’s not exactly Dee Gordon when it comes to baserunning, so it seems pretty unlikely that we’ll see an inside-the-parker from our favorite 42-year-old starter. But it’s still more likely than winning the Powerball!

1 in 160 home runs are inside-the-parkers. Based on his speed score, we can expect that one of every 2,350 Bartolo Colon home runs to be of the inside-the-park variety. Just one per 4,000 plate appearances seems to be the limit for how, uh … unlucky a player can be at hitting home runs. That gives Bartolo a give-or-take 1-in-9.6 million shot to hit an inside-the-parker at any random PA. But, if we consider his actual number of career PAs, there’s approximately a 1-in-39,662 chance that he’ll bring us more joy than $1.5 billion ever could by getting that inside-the-park home run.

Now its a little late in his career to start swinging for power. 2,350 home runs at this point seems kind of unlikely. But here’s what I know about Bartolo:

A) He’s getting YOKED in the DR

Hes gonna strong like a fucking ox heading into this season.

2) He’s always defying the odds. Tolo is “42” years old and weighs “265” pounds (Yea, in your bra.) He has absolutely no business being in this game at all. He’s already a living, breathing long shot every time he puts on that uniform. And to take it a step further, he spent all year at the plate shocking everyone. Going into last season what would you say were the chances that Tolo got 8 hits, including a double that should have been a triple? What would you say were the chances of Tolo driving in 4 fucking runs? I would have said 1 in a billion. So to be perfectly honest, 1 in 39,000 really doesnt sound to crazy to me.

D) His Big fucking Sexy. There’s nothing on a baseball field Bart can’t do.

So there’s no doubt for me that Tolo can hit an inside the parker. The real question is, would you rather win Powerball or see it happen? Coin flip for your boy. I genuinely think a Bartolo inside the parker would bring me 1.3 billion dollars of happiness for a brief moment. I’d be walking on clouds for like a week. But then it would obviously fade. $1.3 billion obviously has longevity. So at the end of the day I’ll take the Powerball winnings but if I could spend like $50 million to guarantee a Big Bart Inside The Park Home Run, I would.