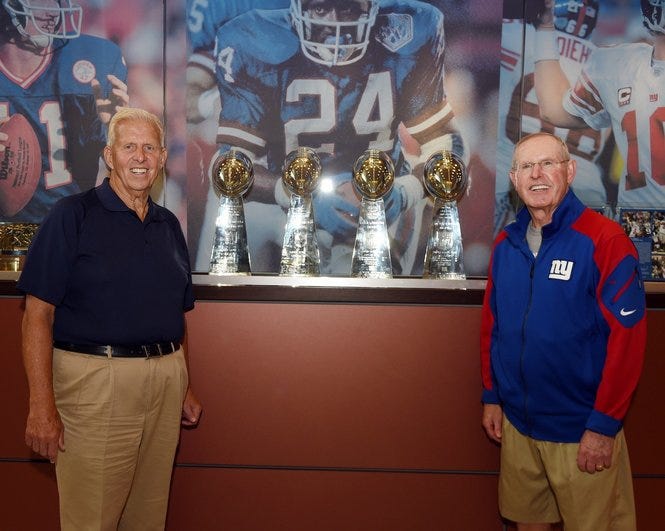 NJ.com-  It seems everyone has an opinion about who the Eagles should hire as head coach to succeed Chip Kelly, who was fired last Tuesday.   Eagles brass is set to interview Giants offensive coordinator Ben McAdoo Thursday, but Hall of Fame head coach Bill Parcells thinks owner Jeffrey Lurie and company should look into another coach with Giants ties.

“I know guys Tom Coughlin’s age who know a whole lot more about football than some of the 30 year olds who are coaching it,” Parcells said, when asked during a radio interview on 97.5 FM The Fanatic Thursday if Coughlin would be a good fit for the Eagles. “Tom isn’t just a good friend, but I have experience coaching with him that goes back a long time. I think his record pretty much speaks for itself.

Yo Bill, what the FUCK man?!?!  We were all able to overlook you going to the Cowboys way back when because you hold a special place in Giants lore, had named your daughter Dallas and can still wipe your ass with $100 bills thanks to Jerry Jones.  But don’t subject us to having to live through that again with Tom Coughlin.

Let the Eagles sign another young offensive coach that allows them to compete, beat us more times than we would like, but ultimately fall short of the Lombardi Trophy.  That’s how this thing works.  Don’t you mess up the equilibrium of the NFC East by getting a championship coach in Philly.  As a Syracuse fan, it was tough enough to kill Donovan McNabb in my mind once the Eagles drafted him.  Seeing General Coughlin march out his troops at The Linc would be too much for me to handle.  I already had to deal with Eli lip quivers and a bunch of hogwash from Jerry Reese and John Mara the last few days.  I don’t need this shit as well.  Please stick to betting the ponies at Saratoga while dropping random hilarious stories about New Jersey, LT, and the 80s Giants.  Thanks and I love you.