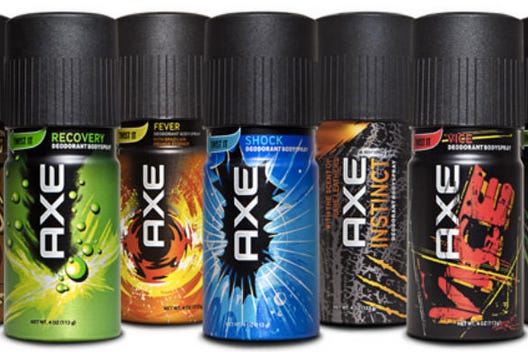 (FOX News) – A British teenager who used cans of deodorant in lieu of bathing died from inhaling gas. Police found 42 aerosol cans in the room of Thomas Townsend, 16, of Folkestone, Kent in southeast England, The Sun reported.According to his mother, Sally, Thomas would spray half a can of deodorant on himself instead of taking a shower, then spray aftershave to cover up body odor. “He would go through a can a week,” she told investigators. “I didn’t know he had so many cans in his room but he was a big hoarder.”

Full disclosure: nowhere does it say that he was actually using Axe body spray. But, at the same time, of course he was using Axe body spray. 1) if you’re a sixteen year old who hates showers but want girls to throw themselves at you, then Axe is your best bet. That’s all 16 year old boys know about the opposite sex. We knew they loved Abercrombie polos and a gaseous shower (no, not that kind). And 2) Axe legitimately just looks like poison. People don’t take the time to read ingredients these days but if you actually look at the back of the can, rat poison and Sarin gas are the two main components. Why do you think “Axe bombs” are responsible for so many deaths at colleges and prep schools every year?