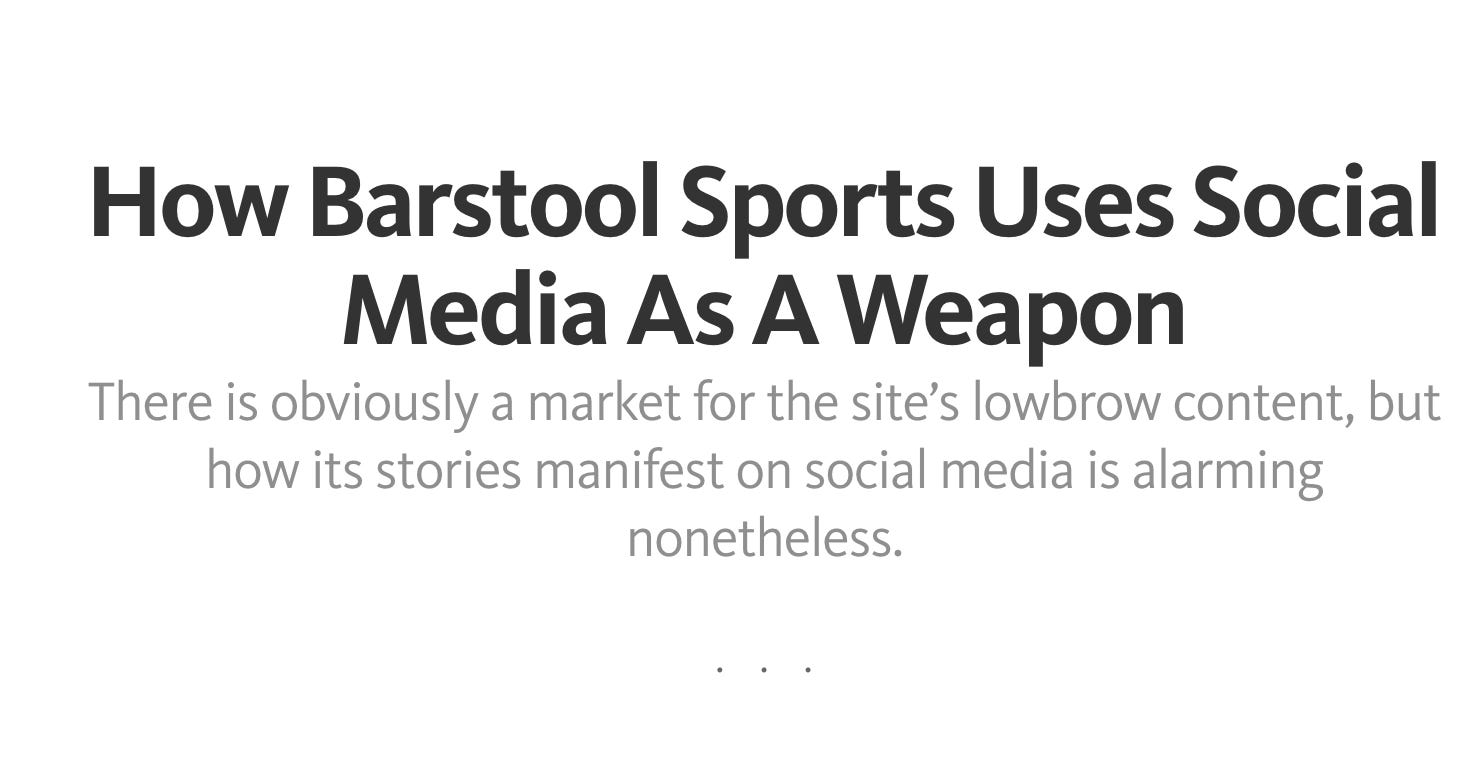 The Cauldron – Meet the man known as “KFC,” a writer for Barstool Sports. For the uninitiated, Barstool Sports is a site dedicated almost religiously to the everyman fan, trafficking in simplistic commentary and jabs at just about every aspect of the sports world. It’s also a profoundly despicable corner of the Internet, where writers cater to the misogynistic underbelly of sports fans and revel in its piggishness. Complete with a “Girls” section highlighting the scribes’ favorite scantily clad women, Barstool deals in masturbatory, self-aggrandizing sexism. They call female reporters sluts, and gained notoriety when they ran a story about the size of Tom Brady’s young son’s genitals. They revel in “bringing back the word “cunt.” You know, “guy stuff.”

Well here we are. Another day in the trenches. To be honest I didnt want to address this. I’ve seen this one million times. Its the laziest, most generic, cookie cutter article about me and Barstool that has been written countless other times. Its the same old social justice warrior nonsense written by people who are dying for attention. Old hat. Played out. This was the first article this kid ever wrote for The Cauldron  and as soon as it went live he took to his twitter talking about how his mentions were going to be on fire all day. He’s a nobody on the internet looking to stir the pot and hopefully drum up some twitter followers. My first thought was “Dont give this guy the satisfaction.” I mean how many times can you respond to the same old lazy hit pieces written by nobodies? You know, the old “A wolf does not concern himself with the opinions of sheep.” But then I realized wolves dont really give a shit about anyones opinions and they just eat sheep for breakfast so you know what? Fuck this kid and fuck the dude who runs the Cauldron. Time to take the gloves off and expose these two hacks for the jokes that they are. I was gonna take the high road but now that everyone’s buzzing about it, I’m going straight nuclear. Scorched earth. Lets take it back to last night when I got a DM from Jamie O’Grady, the dude who runs The Cauldron. He’s the real loser in this situation. This is how it all went down: 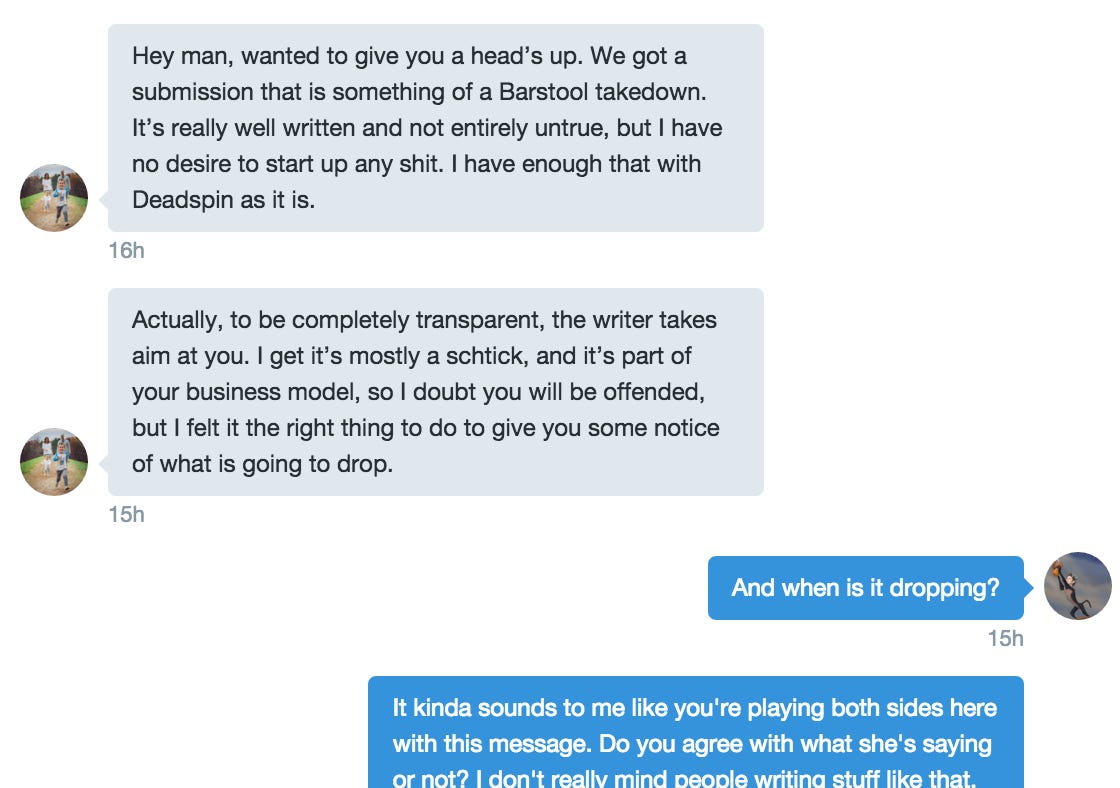 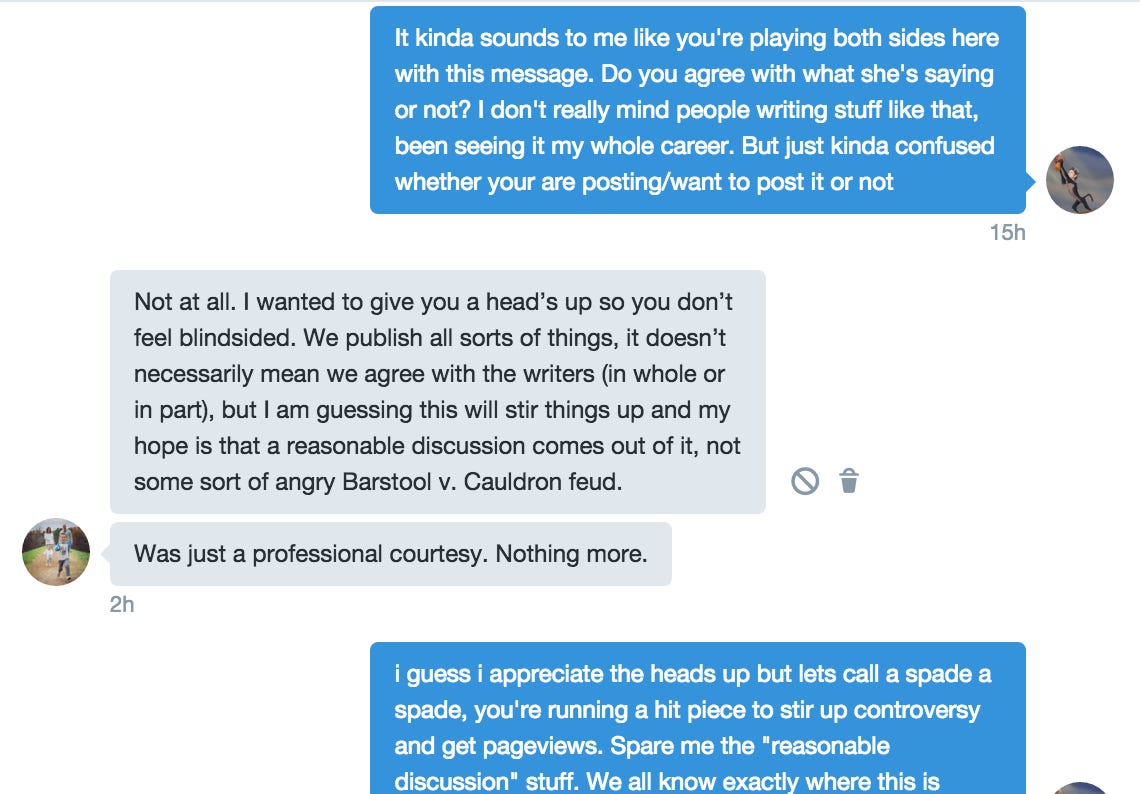 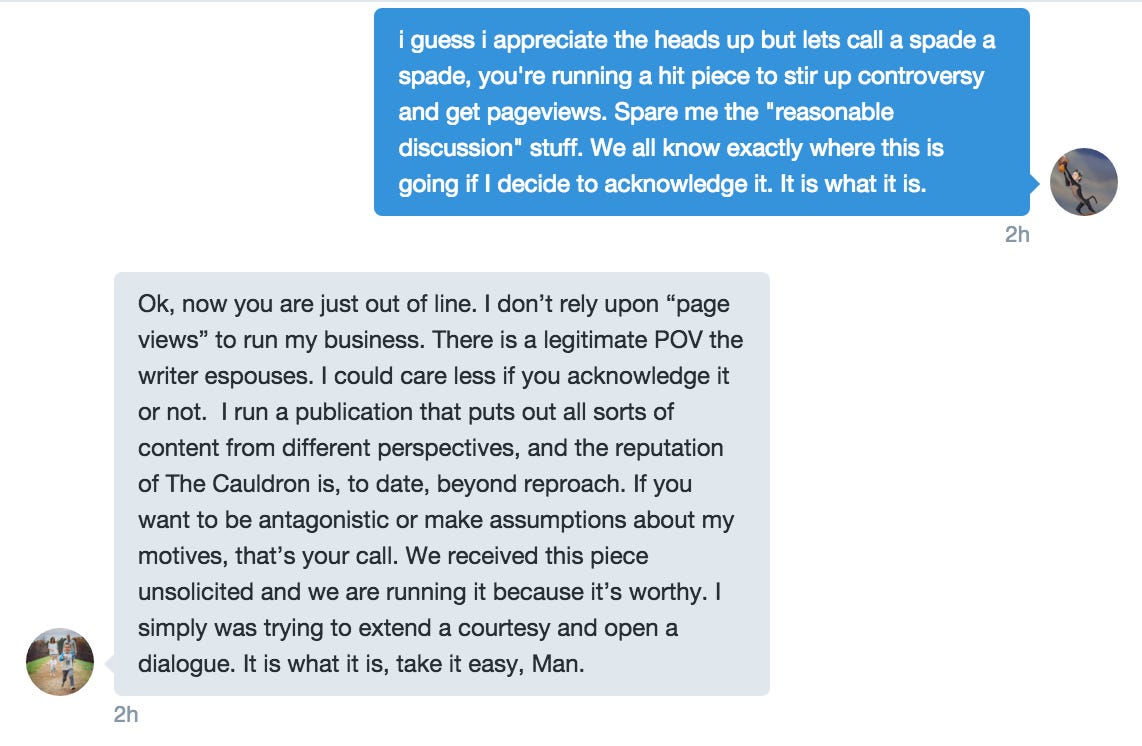 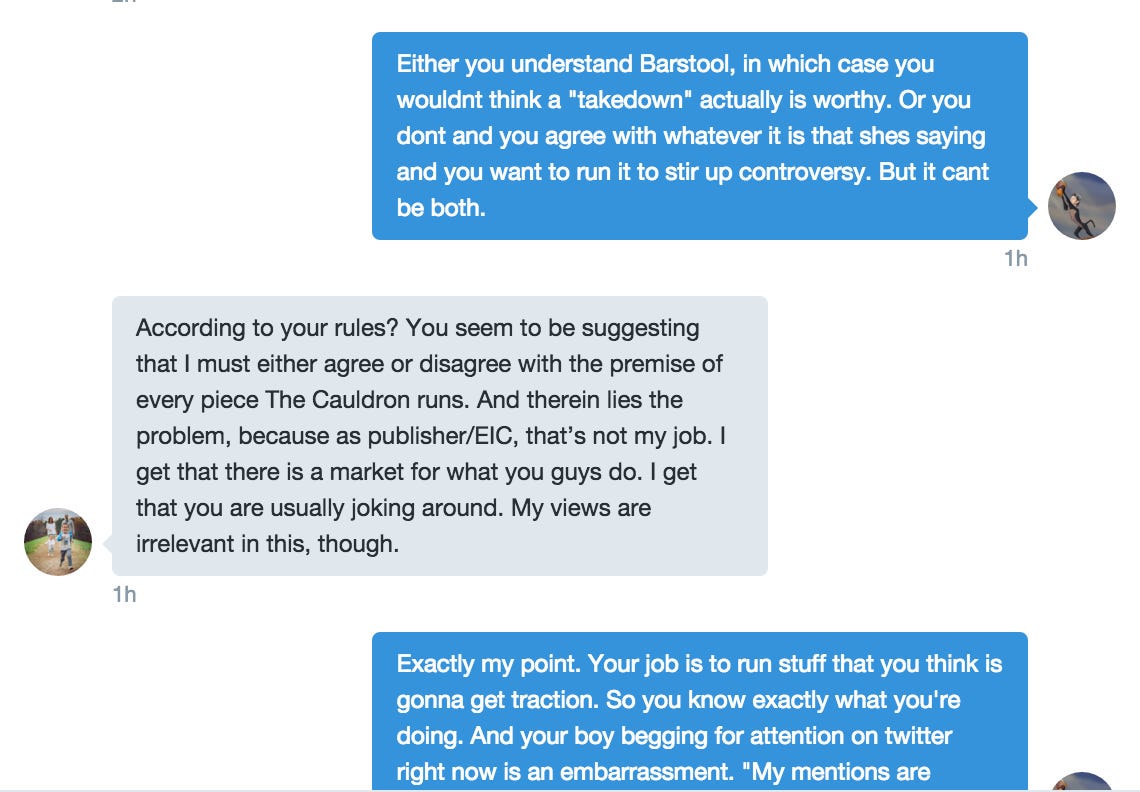 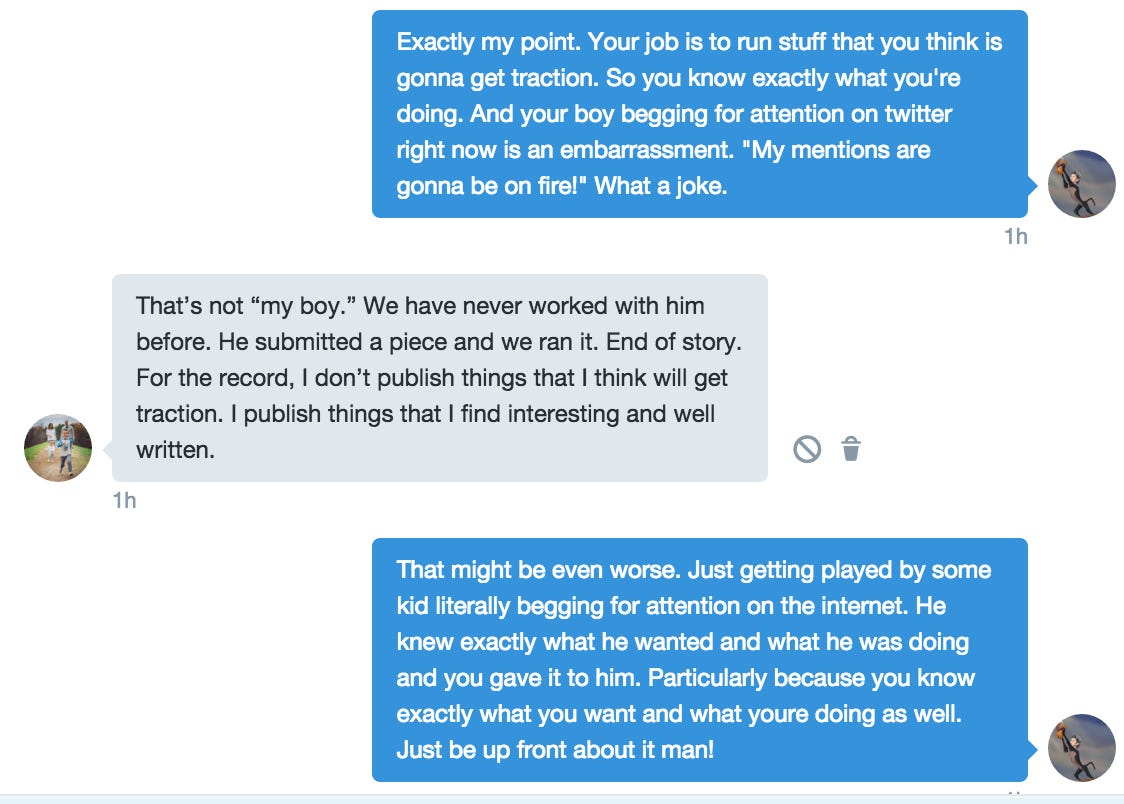 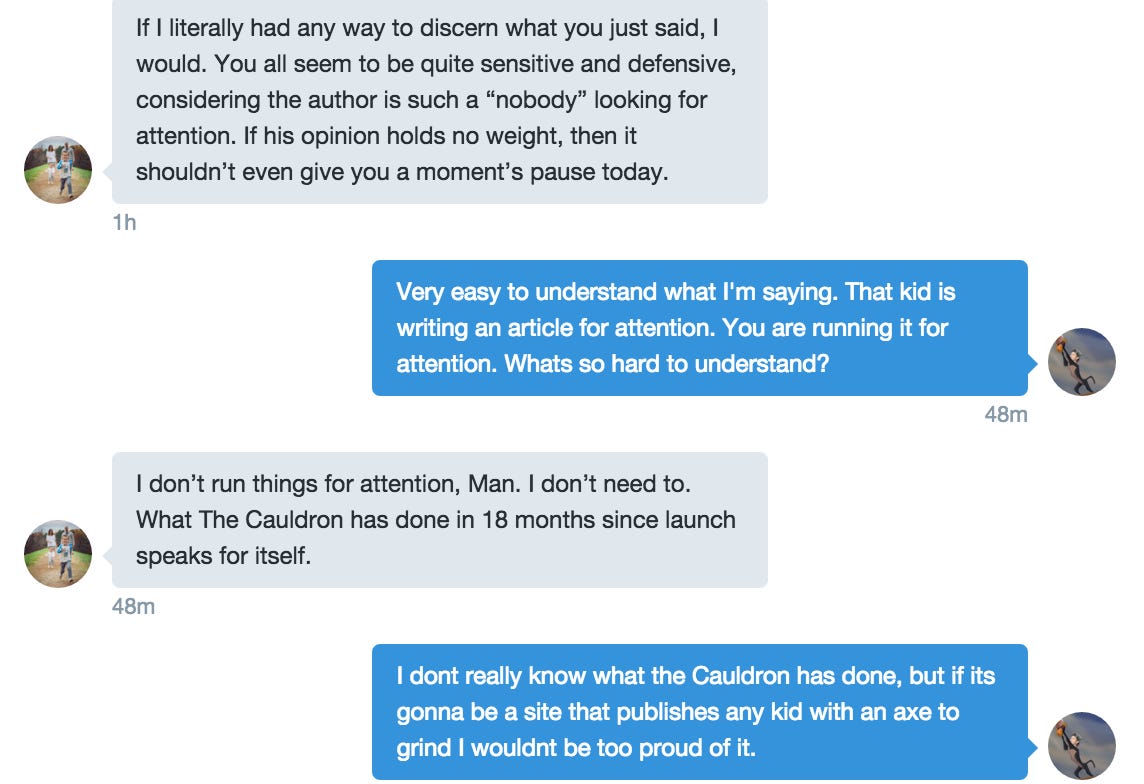 First of all, what the fuck does Jamie Ogrady think “The Cauldron” is??? You would think this guy won a Pulitzer or something. Fucking Al Jazeera is more credible than you guys and they’re run by terrorists. My experience with the Cauldron is sometimes when I’m looking for a sports gif, the 8th or 9th option on Google images has a “Cauldron” watermark on it. To quote a wise man I know “You’re Chiddy Bang, you’re not the fucking Beatles!” But thats why this all makes perfect sense. The Cauldron is a two bit, clown show blog and when they saw the opportunity to ride the coattails of Barstool for exposure, they took it. This dude O’Grady wants to email me about professional courtesy and act like him and his site are the benchmark for journalistic integrity. Well lets talk about that, Jamie. The article you published was a random submission. This isnt a staff member of the Cauldron. He’s not Jamie’s employee. Just a random dude who sent an email saying “I wrote this.” Upset that I fucking smoked his ugly friends a week earlier when they cried about me making Al Qaeda jokes. All this shit about how the Cauldron is “beyond reproach” and its “reputation speaks for itself?” Bro you just published a random nobody’s attempted hit piece because his friends got made fun of on the internet. Thats an absolute fucking JOKE.

Thats what bothers me the most about this shit. These high horse motherfuckers acting like they’re award winning journalists when all they’re doing is fucking begging for attention. I mean LITERALLY. The kid was salivating at the thought of getting mentions on twitter: 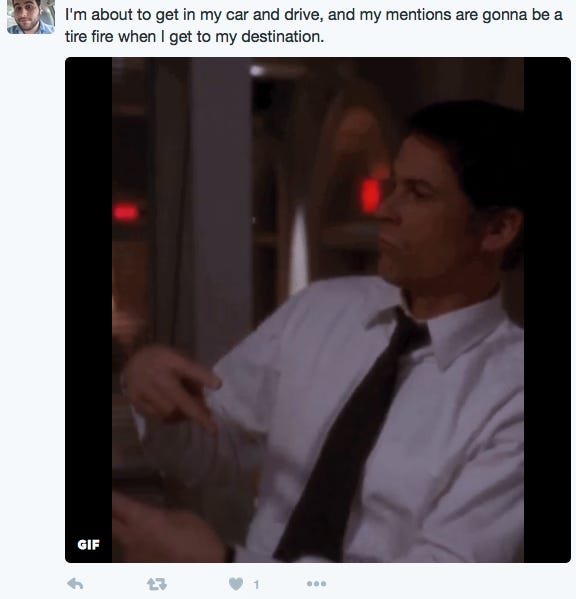 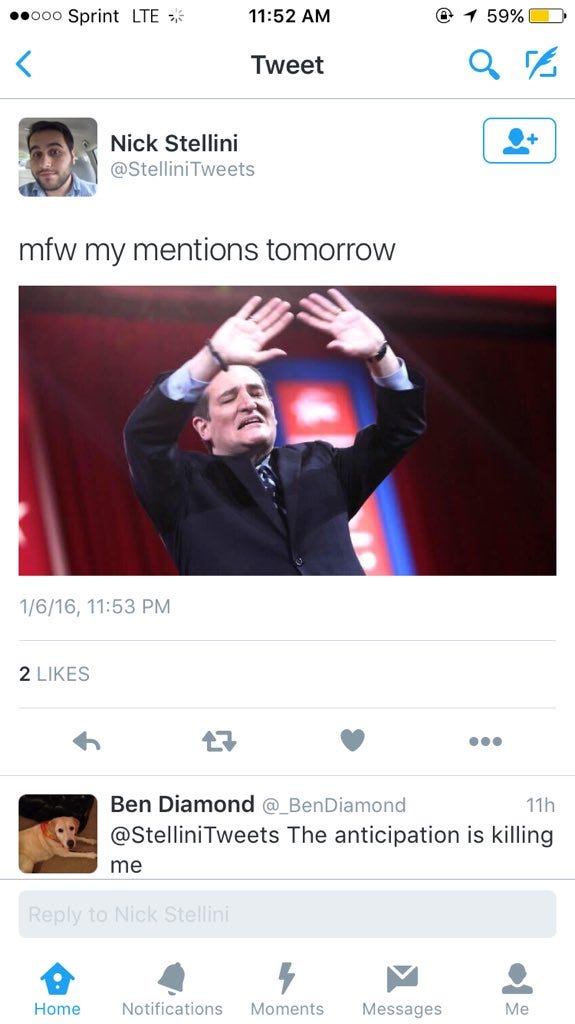 If I ever published some kid’s article and he was acting like that on Twitter afterwards I’d be mortified. But Jamie Ogrady doesnt really care because for him its mission accomplished. For both those fucking clowns. The kid wanted attention on Twitter, the Cauldron wanted pageviews and controversy. They take aim at me and Barstool because we’re 50 zillion times more popular than they ever will be and they know our readership is so loyal they’ll get the attention they want. Its the lazy way out. And you know me…I appreciate anyone who can snake it. If you want to be lazy and collect your paycheck riding coattails, go for it brotha. But dont come at me on the side acting like you’re following some journalism protocol. Dont come at me saying “Hey I’m gonna run this piece attempting to bash you, but I dont want any trouble!” Suck my dick dude. You’re a lazy hack and anyone with a brain sees right through you.

And I know everyone is probably gonna say “they win” be me writing this. They got their mentions and clicks and publicity. But fuck that, I dont care. For 2 reasons – 1) Being exposed as an oversensitive wanna be blogger with zero sense of humor is not even remotely close to winning. And in Ogrady’s case, being exposed as a fraud of an editor who claims to run a site based on integrity and interesting writing when in reality he’s down to run a piece of shit inflammatory article written by any schmuck off the street is a BAD look.  And 2) I dont play by these stupid childish internet rules. Jamie DMing me to tell me I’m gonna get bashed on his site and then trying to play the old “If you dont care about his opinion, why are you even giving this a second thought?” Get lost. If someone comes up to me and spits in my face, big or small, I’m gonna fucking murder them. Plain and simple. Every. Damn. Time. I dont play by these rules of who I can and cant respond to based on who’s more popular. I’m here to tell jokes, get money, and fuck bitches*. And anybody who cant see that and wants to write “takedowns” about me is gonna get lit the fuck up by me and every reader of mine that has a sense of humor. Enjoy your mentions and a day of a couple extra clicks, you fucking losers.

*Hopefully occasionally have sex with my wife.

PS – I didnt really care enough to get into the actually article itself. Its like 10,000 words on the same shit you’ve read before. But it is beyond me how employees for Sports Illustrated write shit like this: 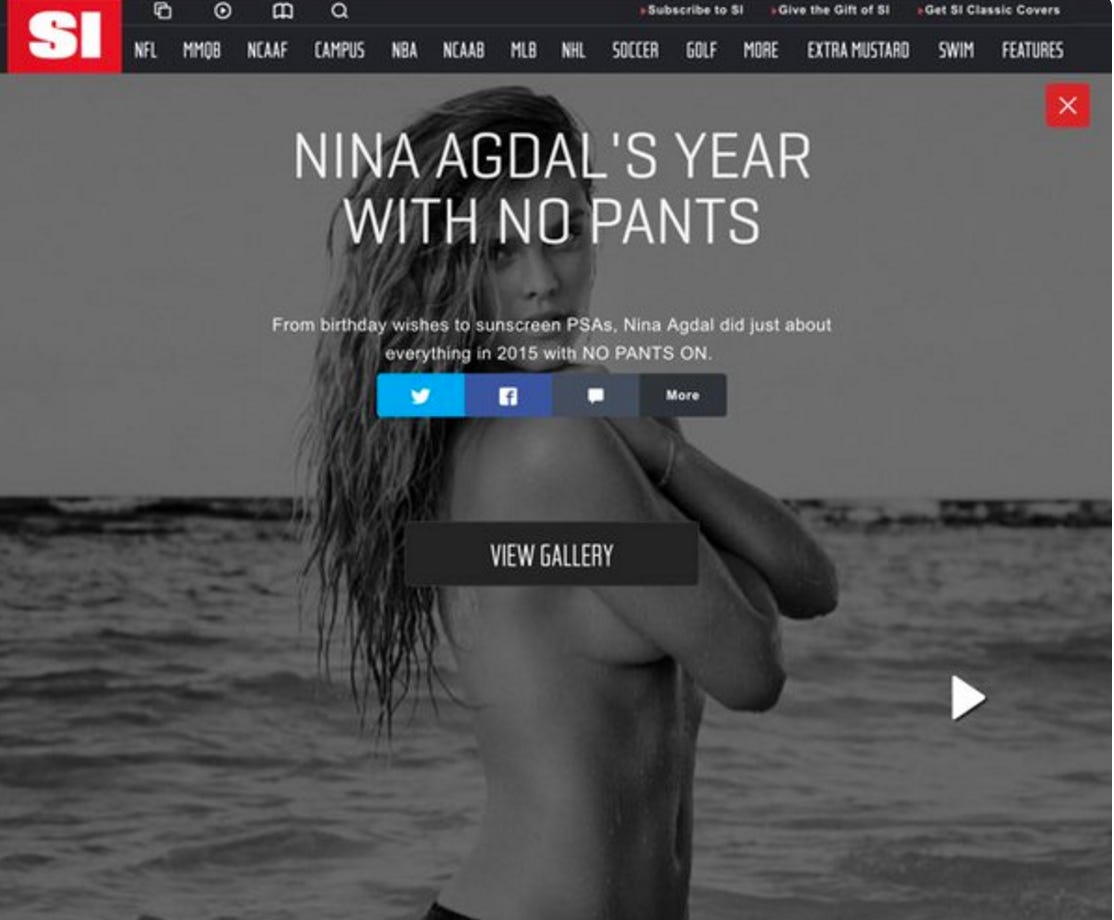