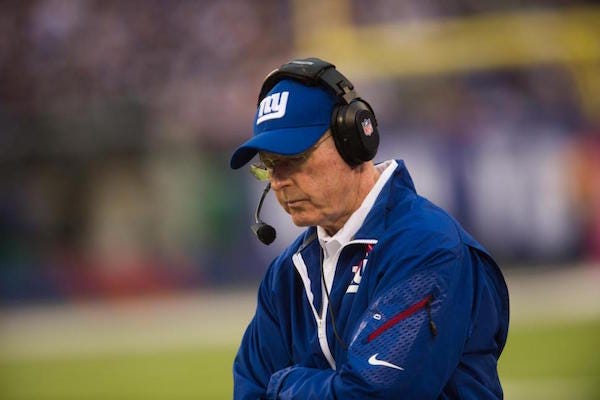 Well there you have it, folks.  Tom Coughlin finally used up his ninth and final life with the Giants this season and fell on his sword today, thus ending the weirdest era of any team I have ever rooted for.  Yesterday I compared Coughlin to a chef that could either make you one of the best meals you ever had or burn the kitchen down and you never knew which chef would show up.  The Giants could win a Super Bowl under Coughlin or go 6-10, and even in the middle of the season, you never knew how it was all going to play out.  And sure, Coughlin made the playoffs five times, but he only won playoff games the two seasons the Giants went all the way.  Just a wild roller coaster ride that I wouldn’t trade for the world.  Because make no mistake about it, Tom Coughlin is one of the best two coaches in Giants franchise history and bled blue way back to when he was a wide receivers coach under Bill Parcells from 1988-1990 (including Super Bowl XXV). A lot of coaches talk about Giants pride, but Coughlin practiced it. Thanks for the memories, Coach.

I’ll admit that I wanted him gone at various points over the last 12 seasons.  Obviously before the 2007 team got hot, I thought he was on his way out.  And after falling apart last year, I thought ownership would make a change.  But he stuck around.  However, three seasons in a row under .500 is almost impossible for any coach to come back from, especially one that is 69 (nice) years old.  In year’s past under Coughlin, Giants fans knew that they had a quarterback with enormous testicles and a coach that was prepared for any scenario that may be thrown at him.  Coughlin always seemed to know the ins and outs of the rule book better than most coaches and would usually make the right timeout calls.  Obviously this season was the polar opposite, as there were more than a few head-scratching decisions from the QB and coach combo that beat Tom Brady and Bill Belichick in two Super Bowls.  You can blame the clock mismanagement and bonehead decisions that cost the Giants multiple games on a wide array of people, but in the end it comes down to the head coach.

Now you could have convinced me that Coughlin deserved a chance to coach out his contract and see if he could rally the troops one more time. Again, the Giants were thisssclose to being a playoff team. The roster assembled by Jerry Reese has done Coughlin no favors, and what happens with Reese may be even more important than what happens to Tom.  But now we will be dealing with the uncertainties that come with hiring a new coach.  Say what you want about Coughlin, but you at least knew the crazy ride you were in for with him. Oddly enough Coughlin finished his 12 seasons in New York with a .531 winning percentage in the regular season with the Giants, which was his exact regular season winning percentage over eight season in Jacksonville.  We will be hearing about a lot of potential replacements the next few days/weeks, with no potential candidate being a slam dunk.  In fact, the only coach that I would consider a slam dunk is Jim Harbaugh, and I don’t think he isn leaving Michigan for AT LEAST two more seasons.  So we will hear all the names like Sean Payton and Nick Saban and Teryl Austin and just hope we don’t end up with another Ray Handley.  And this video of Eli Manning says it all about how the players and fans feel about Tom Coughlin’s body of work here.

So if you are like me and want to remember the good times, put on your Super Bowl XLII or XLVI Champions shirt and watch the videos of the Super Bowls or classic playoff games from those runs tonight, since there is no Monday Night Football.  Goodbye Tom and thanks again for EVERYTHING.