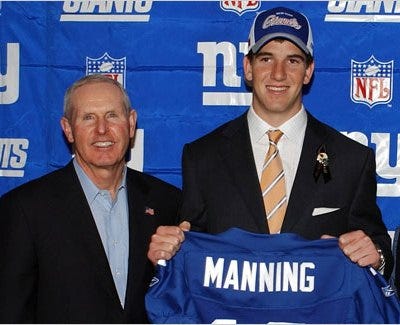 As the Giants wrap up their 3rd straight losing season & miss the playoffs yet again, all signs point to fans seeing Tom Coughlin running the Big Blue show for the last time today. While I firmly believe, despite some questionable decisions, TC is hardly to blame considering the roster Jerry Reese has put together this is the right time. I just hope people realize the league’s oldest & one of the longest-tenured coaches deserves nothing but praise for the overall job he’s done since being hired in 2004.
After the Fassel fiasco, the G-Men gave Coughlin the gig to revitalize the franchise. While most Giants resisted his disciplinarian style (“on time” means “five minutes early”), the results turned players into believers. He helped make Tiki a reliable superstar instead of a fumble waiting to happen – and when Barber retired to spite TC he went on to win the first of two improbable Super Bowls the very next year. Michael Strahan was a super star who couldn’t stand his red-faced coach – until he sent him into retirement with a ring. Tom Coughlin had a knack for rallying his squad when their backs were against the wall. He staved off the hot seat a few times – twice with titles – and from ’05-’12 NY never finished below .500.
2012 was the beginning of the end though. After a 6-2 start, the Giants fell flat on their faces & missed the postseason as defending Super Bowl champs. The Coughlin-coached G-Men have had 3 straight losing years since then and it’s simply time for change. He’s earned every inch of rope he’s gotten from Giants brass, but at some point heads need to roll. I don’t think any coach could’ve done much with the roster he’s been given but that problem isn’t gonna change overnight. It makes sense to start anew as part of a Giant makeover.
Head coach, GM, perhaps a couple of former first round picks (JPP & Prince) leaving via free agency and soon enough the arrival of the heir apparent to 35 year-old birthday boy Eli Manning – a new era should be coming as familiar faces start to disappear. Here’s to hoping the grass is greener than the recent torturous couple years. As for the Coughlin era, despite a few bumps, fans can’t really ask for more than ’07 & ’11. Thanks Tom.