After beating the New England Patriots, the New York Jets are set up for a win and in scenario against Buffalo in week 17. You can read more about that match-up here. For now, let’s go through this week’s mailbag questions. Thanks for sending them in on Twitter! 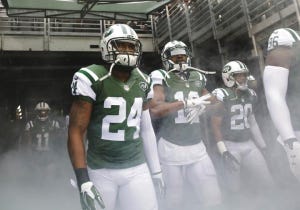 Yes. Rex is a seasoned veteran of coaching meaningless week 17 games and he’ll throw the kitchen sink at the Jets: fake punts, fake field goals, surprise onside kicks, etc. However, if the Jets can jump out to a quick lead on this banged up team, who hasn’t been shy about expressing their disdain for their coaching staff, they could very well fold like a house of cards. Get the crowd out of the game. Get Buffalo counting the seconds until they can leave that frozen hellhole and start their off-season.

@TurnOnTheJets@BarstoolNewYork if Jets make the playoffs, how far do you think they can realistically go

I outline my best case route for them here. There isn’t anybody scary in the AFC playoff field outside of New England and I think the Jets can go toe to toe with them. They certainly wouldn’t be the favorite (probably 5 or so point underdogs) but they are definitely talented enough to make some noise if they are playing in January.

@TurnOnTheJets@BarstoolNewYork considering cap, players hitting FA, and age of some guys, how do you sustain this success over yrs to come?

The most important thing is to not overpay for a non-premium position (like running back) and to find a reasonable contract for Ryan Fitzpatrick as a bridge veteran quarterback. You don’t want to pay him crazy money that is going to impact the supporting cast around him (as Connor Rogers discusses here) because he needs weapons around him to thrive. I’d focus on getting young talent on the offensive line and working to improve the speed off the edge on defense.

@TurnOnTheJets with the emergence of Enunwa does he stay in his same role next year or revert to a 3/4 WR ? @BarstoolNewYork

Enunwa plays a unique position. He is a H-Back primarily and functions as a hybrid tight end/wide receiver. I don’t think the Jets are going to change his role because he is starting to flourish in it, I do think he will be more actively involved in the passing game on a weekly basis going forward. He could be player that ends up with 5o or so receptions next year and should become more of a factor in the red-zone.

@TurnOnTheJets@BarstoolNewYork Examining this game. Jets did a solid job containing Taylor Wk10-What gm plan can they do 2 duplicate #Jets

It should be an easier task this time around because Charles Clay, LeSean McCoy and Robert Woods aren’t playing, limiting Taylor’s options. Keep him in the pocket, bracket Sammy Watkins and the Jets are going to be in good shape. Taylor has struggled when he can’t scramble or is forced to move off his first read. The Bills are a much better offensive team than defensive team, so if Taylor doesn’t have a big game…it is hard to see the Bills getting an upset.

@TurnOnTheJets What are some of the key weaknesses in offensive and defense of the Bills the #Jets can exploit?

The Bills are 29th in Defensive DVOA and banged up. They aren’t a good defensive team. The Jets should play aggressive and look to attack down the field. Play uptempo and also integrate Bilal Powell and Quincy Enunwa (who didn’t play in the previous match-up) because Rex Ryan defenses generally struggle defending pass catching running backs and tight ends. When the Jets are on defense, make somebody besides Sammy Watkins beat you.

@TurnOnTheJets@BarstoolNewYork Who scares us after handling Pats? In NE now, fans saying loss was bc they rather #Jets in playoffs over Pit

I don’t buy that “New England was scared of Pittsburgh” crap. They already beat them earlier in the year, have never lost to them in the playoffs and I doubt they were tracking the game on their sideline. The Jets are the biggest threat to New England in the AFC Playoff field (if they get in) because they aren’t one-dimensional and have a balanced attack on both sides of the ball. Yet, I wouldn’t say the Jets shouldn’t be concerned about New England because of last week’s win. The Patriots are the Super Bowl favorite heading into the playoffs. A victory over them would be a big upset for the Jets.