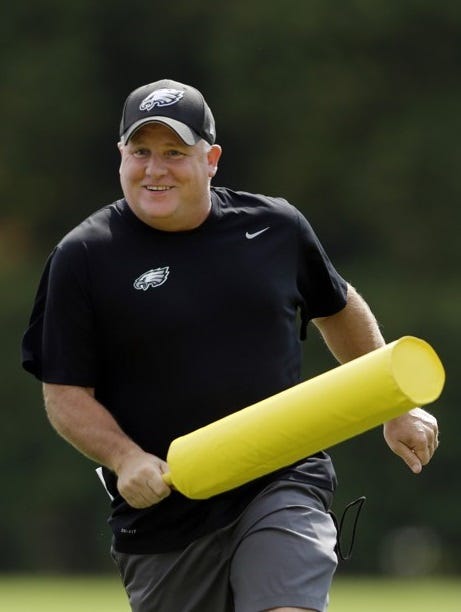 BGN – NFL teams are off the hook if they can claim any of the following three things (via Deadspin): 1) They made the playoffs in one of the previous two seasons. 2) They have a new head coach. 3) They already appeared on the show in the last 10 years. The Eagles cannot claim any of the above, and you can bet HBO would love to cover the Chipper. The other teams who are eliminated from playoff contention and fit the criteria above (for now, before head coach firing season) are the 49ers, Bears, Bills, Browns, Buccaneers, Chargers, Giants, Jaguars, Raiders, Rams, Saints, and Titans.

Listen to those bells, Chip. They toll for thee. Chip Kelly hates the media more than a mogul’s head hates hair. He’ll go into hiding in his New England nook after the season until he’s contractually required to speak. Well you know what I fucking hate? Going into a meaningless week 17 two years in a fucking row. I’m still on Chip’s ship and think he deserves another year in charge of it all, but dammit, I’d love this move just to spite him in the face. Maybe it’ll open up his totalitarian mindset a bit. Or maybe it’ll show just how inept this organization is and we’ll be truly boned before the season even begins. Whatever the case, the NFL LOVES Chip because of all the discussion he brings to the dinner table. What other team would you even want to see on HBO? The Bears, Browns, and Raiders seem like the only other worthy options. Hell, I’d even throw Rex in there for another run solely because the Mafia will have another reason to wake up in the morning. But you can book the Eagles are far and away the most attractive choice.

Oh, and whoever loses Sunday will have the honor of playing the Rams in England next season. But this game is meaningless (other than if they lose they get a WAY better draft pick and easier 2016 schedule), so expect the Eagles to win by 40.