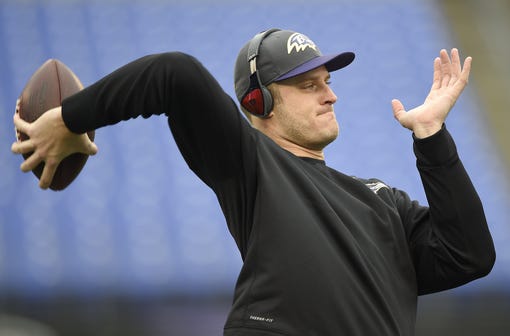 And so it begins. Matt Schaub. Out. Jimmy Clausen. Out. Ryan Mallett. In.

In the scheme of meaningless games for the Ravens, this is a pretty big one. This would be a win to really hang their hat on. A season sweep of a bitter rival would at least be a small silver lining in what’s been a disastrous and awful season. Do I expect them to win? Absolutely not. No way. Do I expect them to even compete? Not really. But it wouldn’t shock me if they did. The Steelers have an incredible ability to get in their own way as soon as the going gets good. They’re the trendy pick to be a wild card team that does damage in the playoffs. Situations like these are exactly when Mike Tomlin does something boneheaded and the Steelers fall flat on their face. I’ve seen it countless times in the past half decade.

As for draft pick implications, yes, technically it wouldn’t be in the Ravens’ best interests to win today. But I want them to do it anyway. Want the sweep. Need the sweep. I would take great satisfaction in the Steelers missing the playoffs because of Ryan Mallett and Co. It could happen. This rivalry has a tendency for upsets. Shit, Kyle Boller went 5-3 against the black and yellow. That’s all you need to know. Weirder shit has happened. So let’s go boys. Have a day out there. And fuck the Steelers.