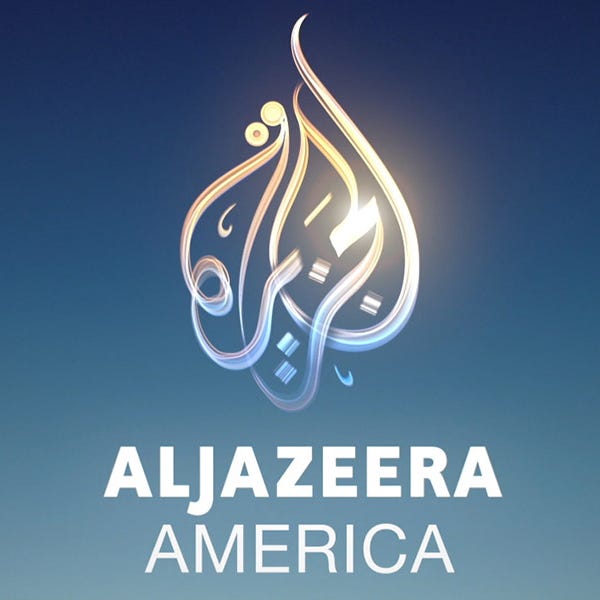 If there’s one thing I’ve learned about the internet and blog life, it’s that you never know where your next feud is coming from. Sometimes you write a blog about blind parents not being good parents and next thing you know you find yourself embroiled in a 6 year battle with an entire sect of physically handicapped people. Sometimes you write a random blog about Ariana Grande and Big Sean and a couple months later you’re in a rap battle with some hoodrat and your boss.

And sometimes you clown around about the Al Jazeera News Network and find yourself deep inside political news twitter on a casual Saturday night. I will post some of the highlights for you, since it’s impossible to post all the tweets I received from the fanboys and fangirls of Al Jazeera, but I will say this: It’s absolutely ridiculous that this was the tweet that caused the internet to reach their breaking point with me. Like out of all the shit I’ve ever said, THIS was the tweet that crossed the line with everyone? I had people texting me asking me what sparked the controversy and when I explained they were like “Oh yea I saw that but I figured there had to be more.” Nope. Just diehard fans of the Al Jazeera News Networks who will NOT stand for my jokes. So heres how it all began: 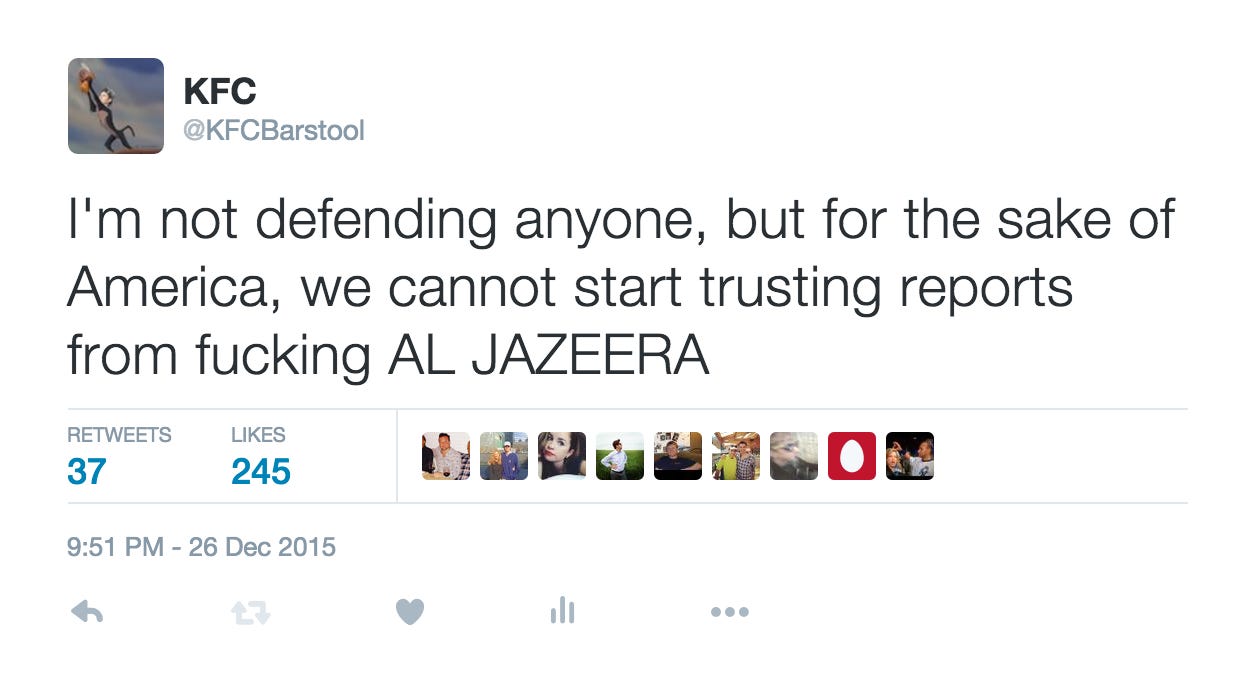 Me and my friend Dan exchanged a couple tweets about the perception of Al Jazeera:

And thats when both of us started getting chirped about how trustworthy Al Jazeera is and how its the most credible news source and blah blah blah. Donnnnt Caaaaaareeee. So I fired off one more tweet. A tweet that was about as standard as it gets for a person like me. The message was simple – Al Jazeera = Al Qaeda. 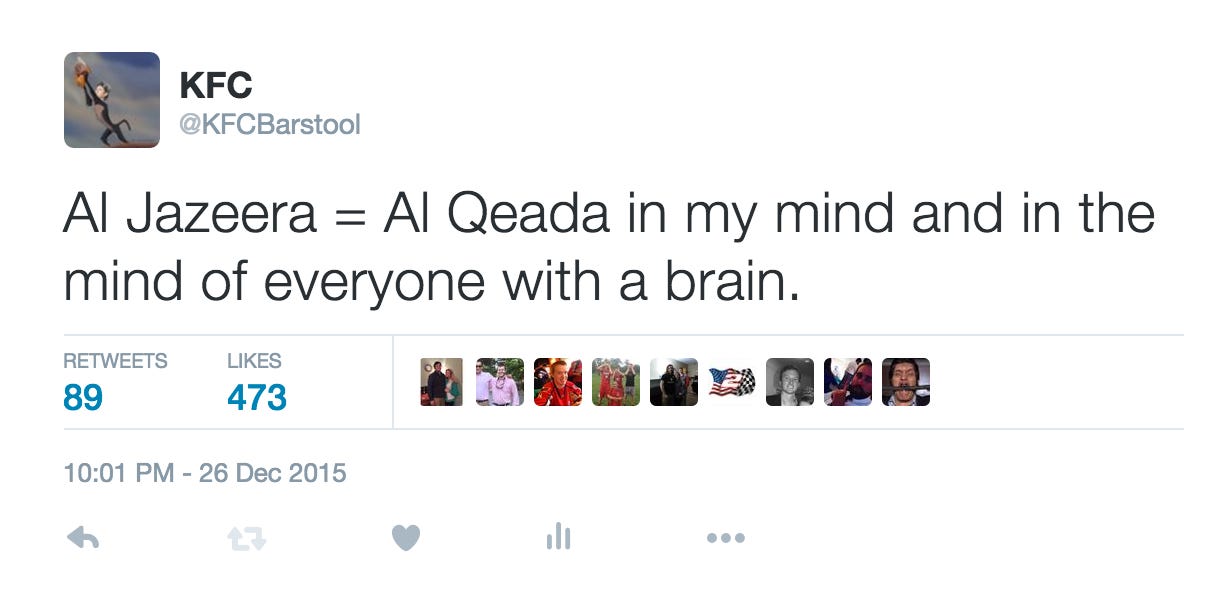 And that was it. That was where the internet lost its mind with me. Which is funny because this is the quintessential Barstool tweet. On some level its a serious tweet – A) I legit do not think Al Jazeera is a credible source on breaking sports news (Which has proven to be true). And B) yes, when I hear Al Jazeera the first thing that comes to mind is Al Qaeda. Those are just facts, jack. But a blogger who has made a living making fun of anything and everything lobs out a generic, throwaway tweet and out come the torches and pitchforks. 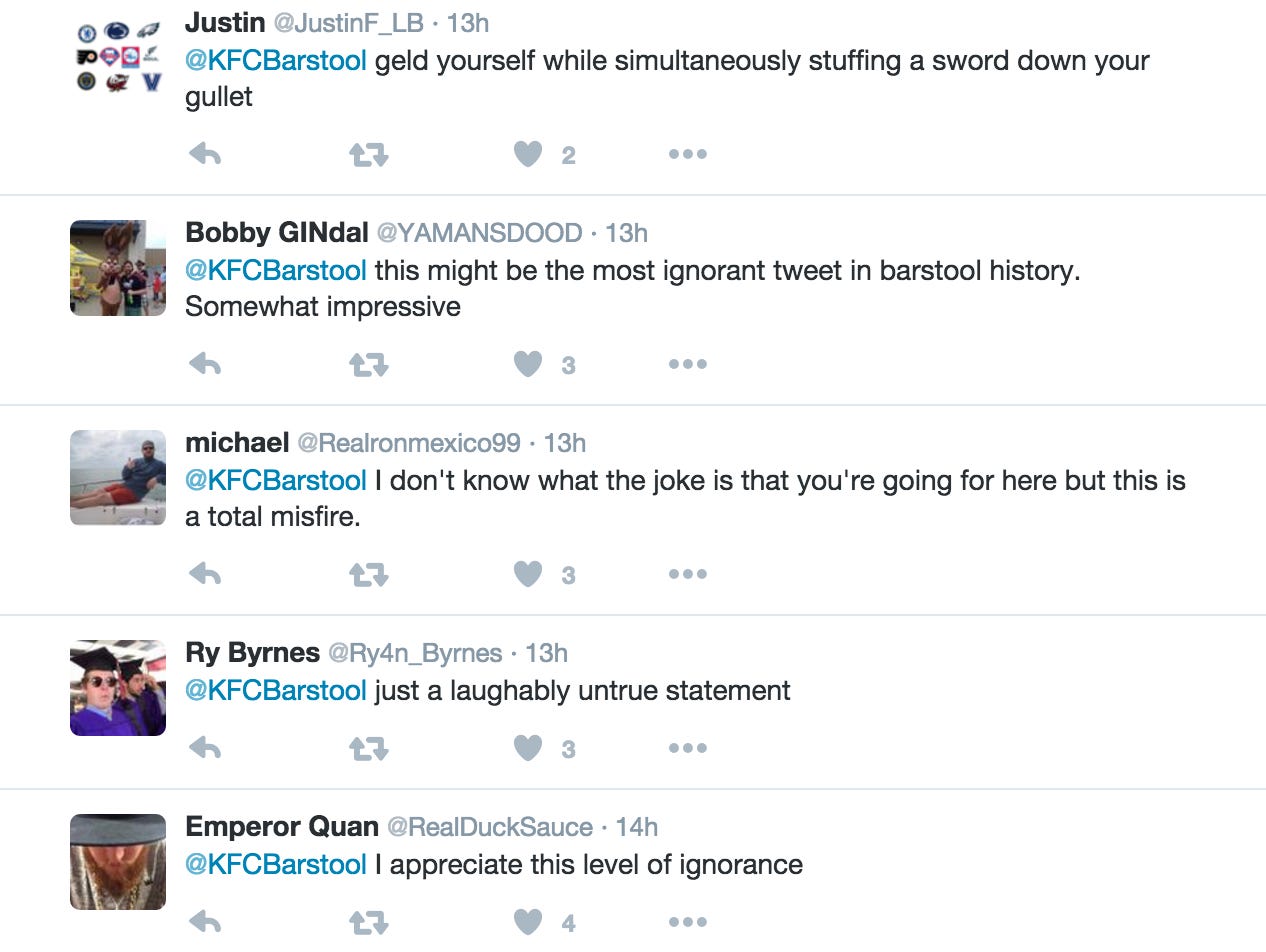 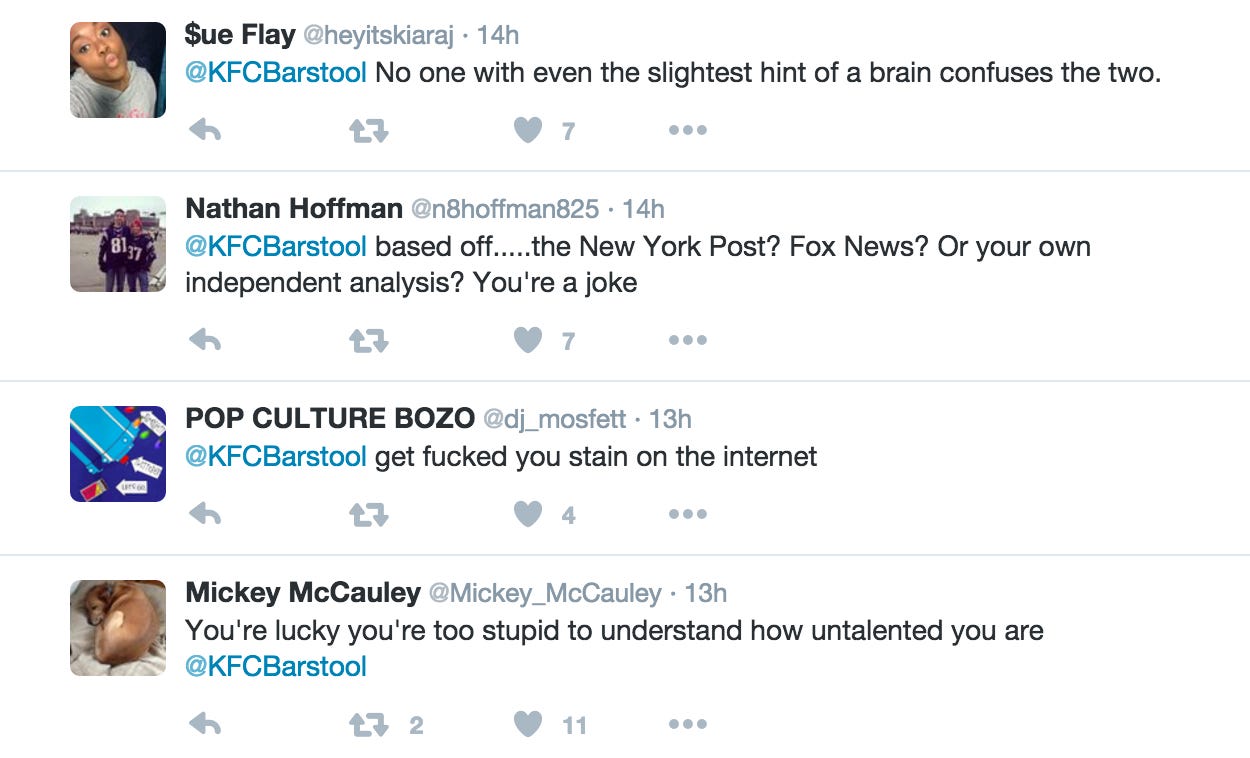 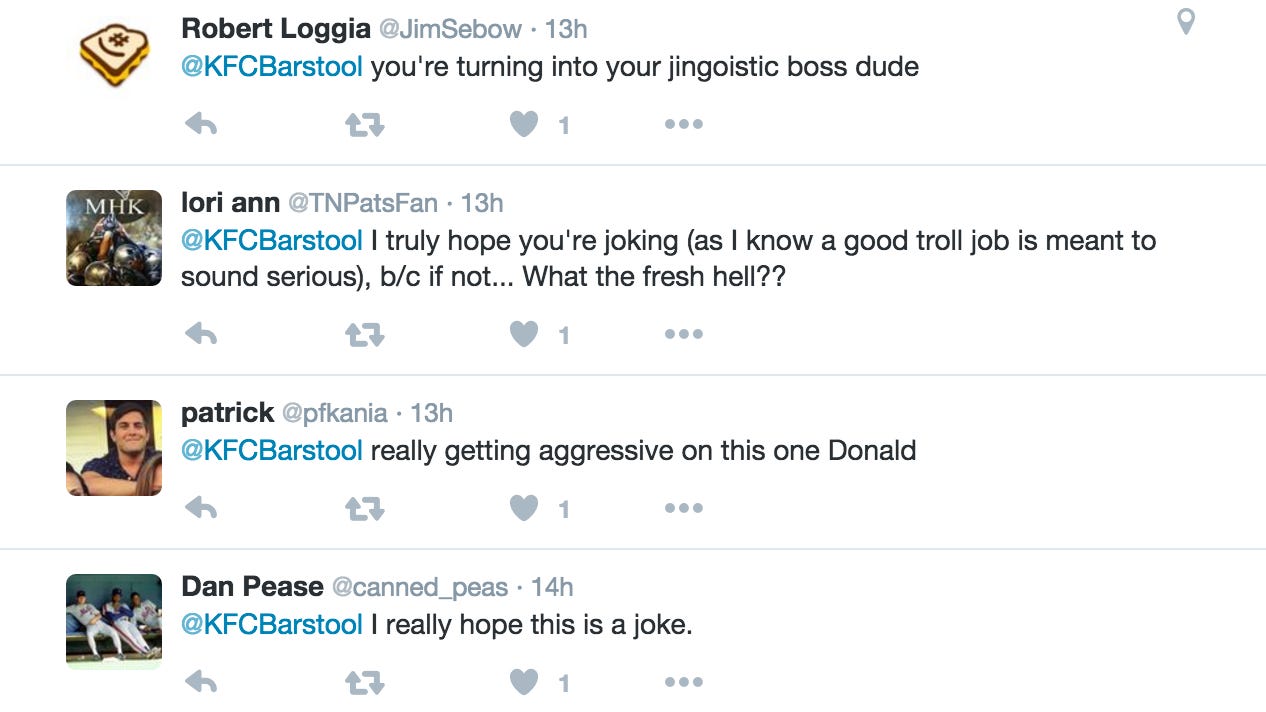 Tons and tons more continued to flow in. But “your daughter will grow up stupid” and calling me jingoistic were my favorites. Then we got into the good stuff. Everyone’s favorite biggest loser on the the planet earth, Jesse Specter.

Specter legitimately sits around waiting for any chance to pounce on anything he can spin to his sanctimonious followers as a negative for Barstool. Never has someone been so obsessed with something they hate. And that’s coming from a Mets/Jets fan and Yankees/Patriots hater. Jesse Specter might genuinely be the biggest loser on the internet. I cannot imagine that dude has a single actual friend. He would probably murder a hobo in order to have anything even remotely resembling the popularity of Barstool. He gives hockey twitter a bad name. Luckily Chief gets it: 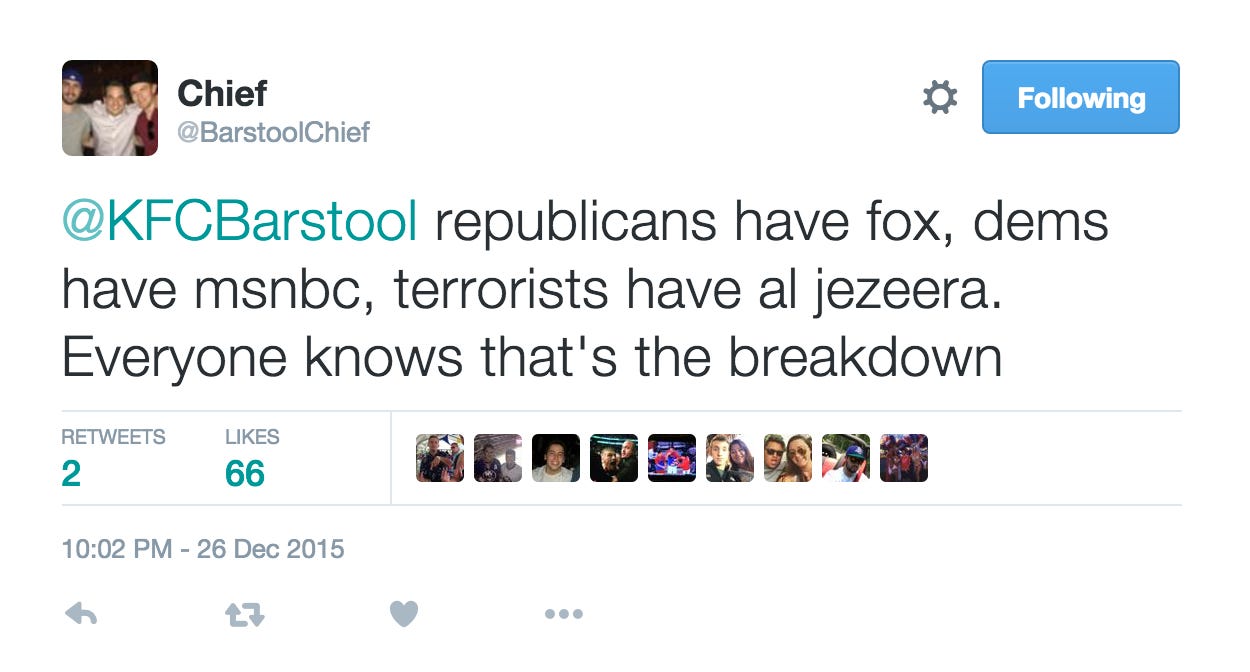 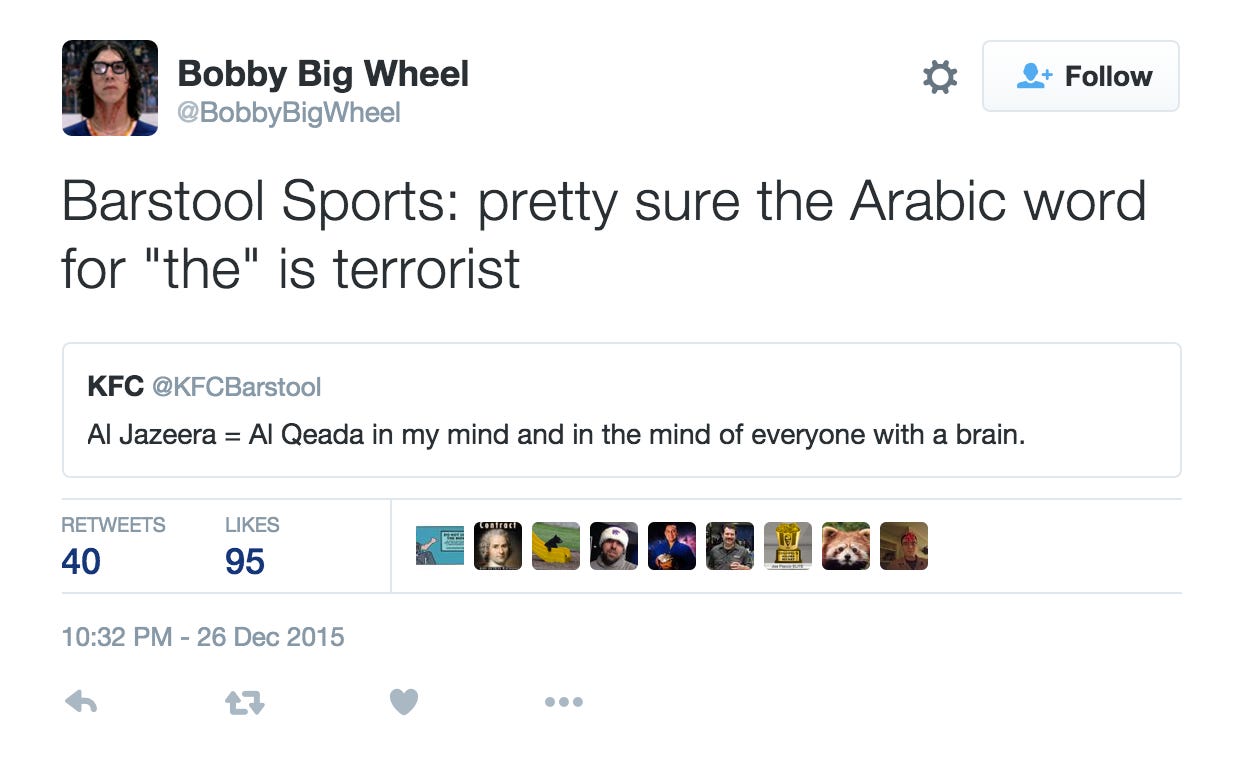 Bobby Big Wheel: No idea who you are or who you work for but he’d help hide the body with Specter to be as popular as us.

This is what these idiots don’t realize every time they try to tweet this stuff out as if it was a big misstep by us or something. They always think its like a “AH HA! I got them!” moment thats going to ruin barstool. Newsflash you fucking idiots – this is what people like about us. Because we’re normal, relatable guys with a sense of humor. We don’t take shit serious. We exaggerate. We joke around and we certainly aren’t out here to engage in debates about the credibility of the fucking AL JAZEERA NEWS NETWORK. For real if you ever find yourself on the internet vehemently arguing about the credibility of your favorite news outlet you need to promptly kill yourself. You are the biggest loser alive and I guarantee very few people like you.

Then there was the feminist side of the whole debacle: Jen Mac Ramos! 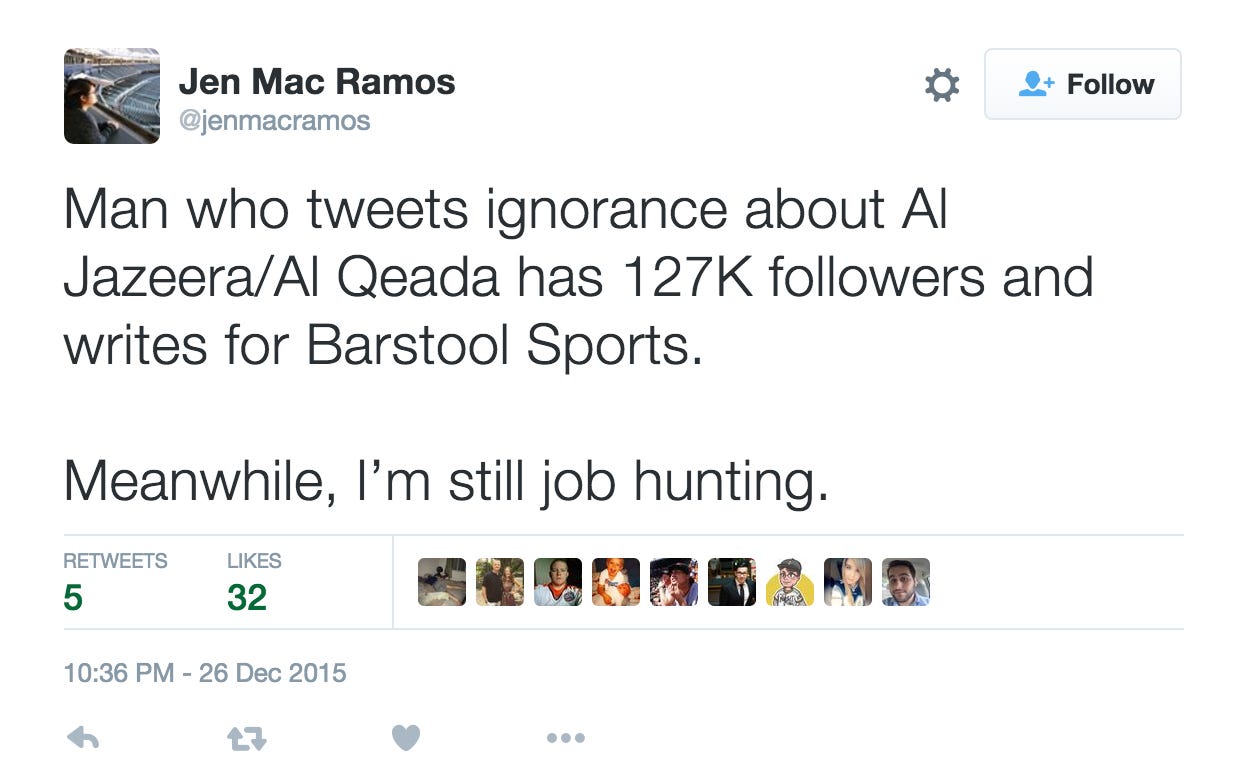 Poor Jen Mac! She’s been jobless for a whole 6 months! 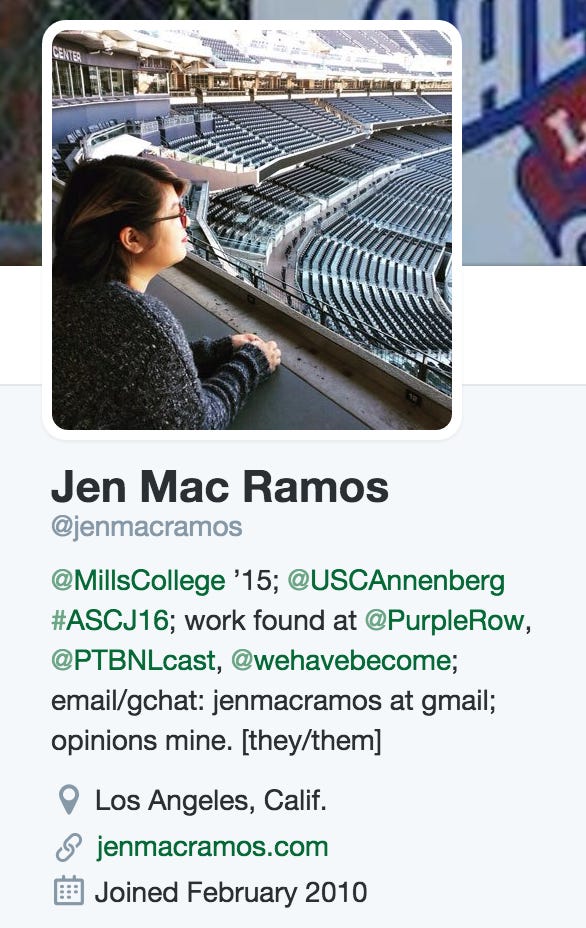 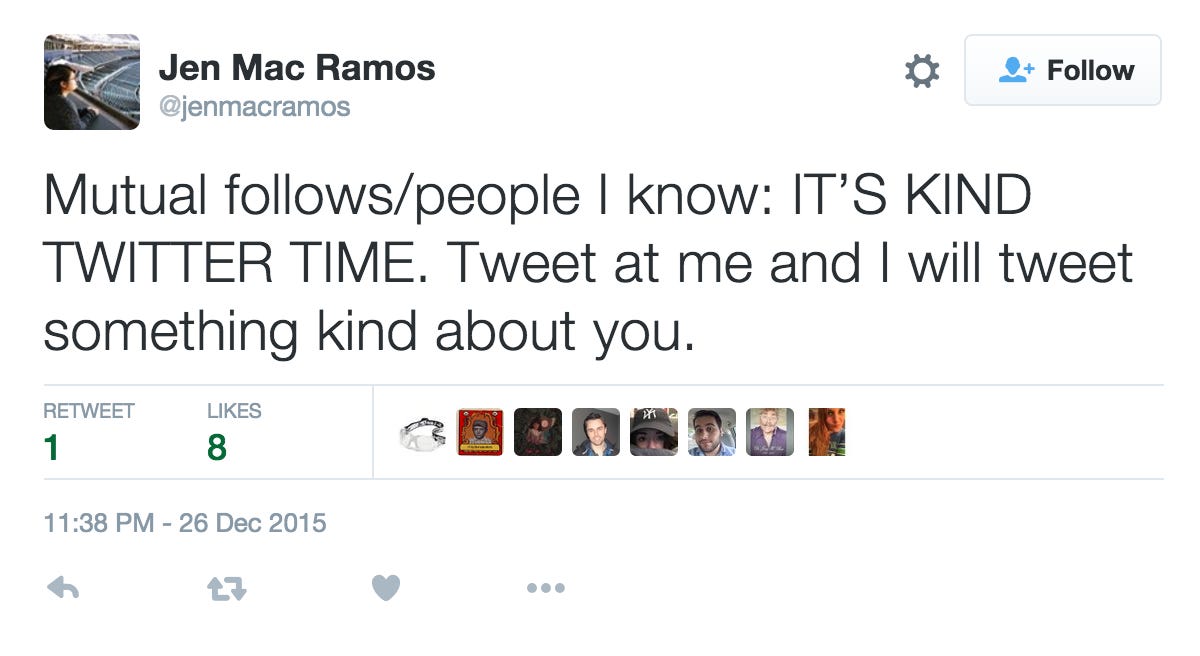 Then Velma from Scooby Doo got involved: 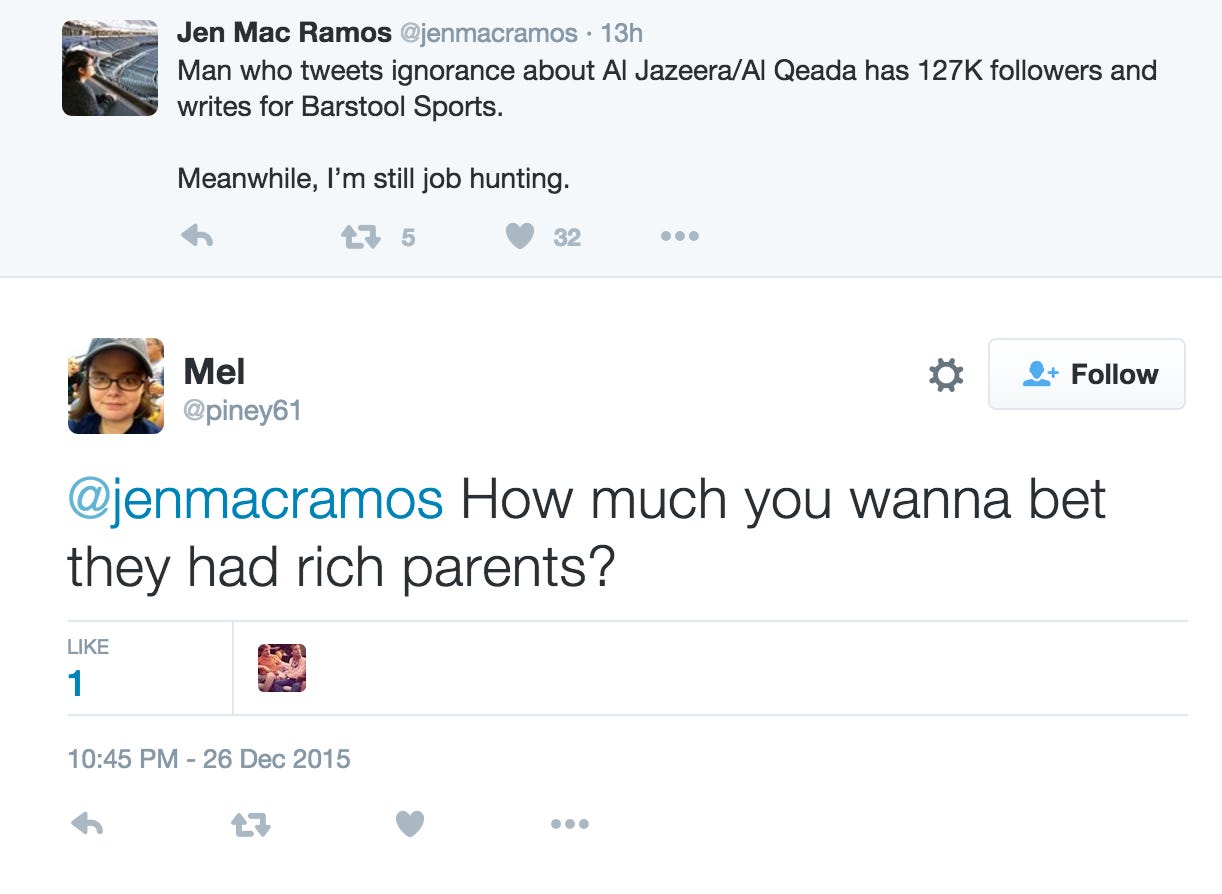 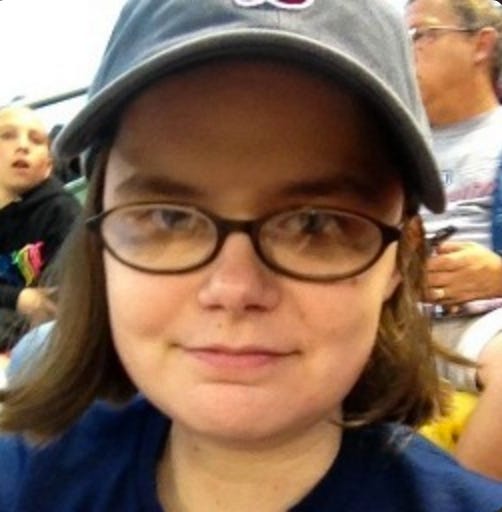 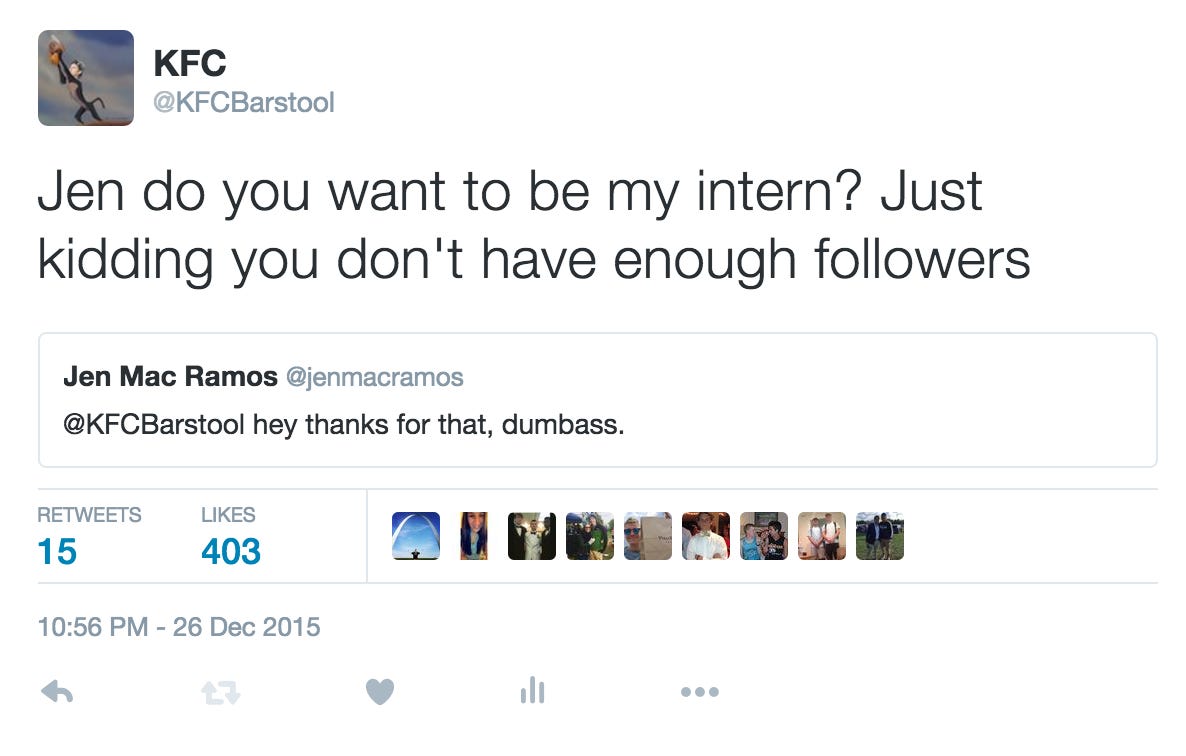 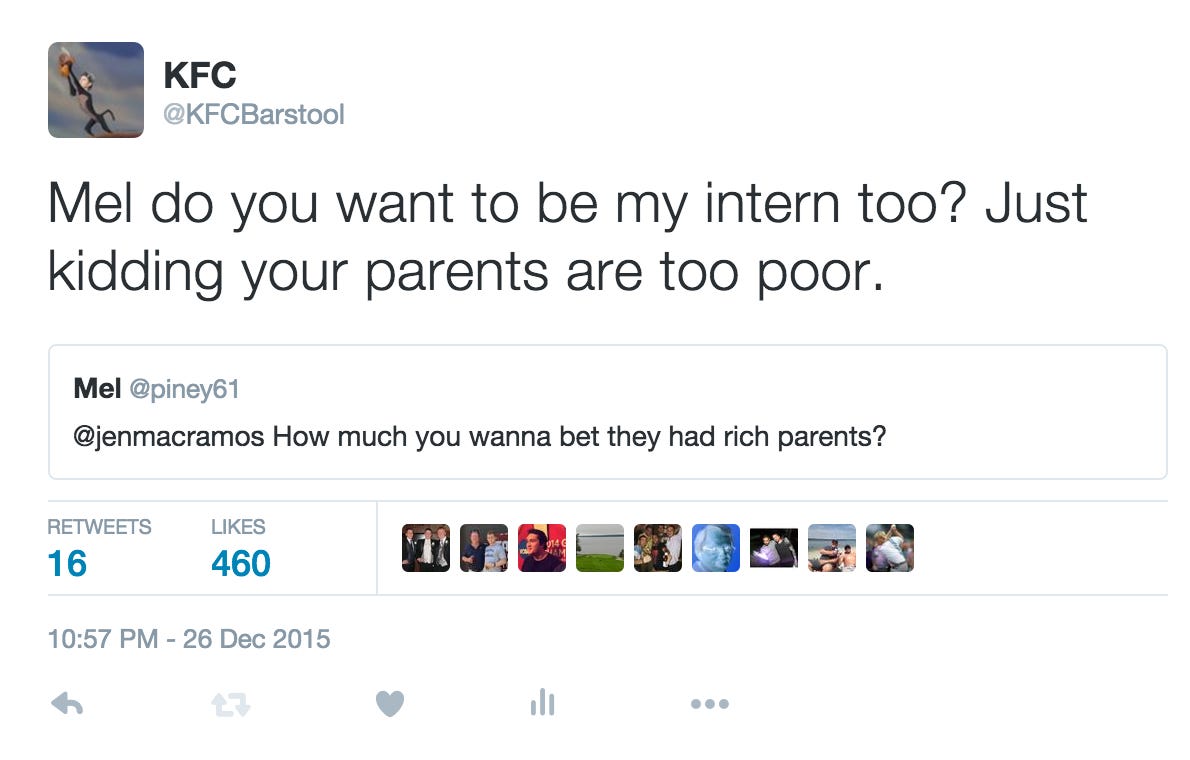 Then there was the Al Jazeera diehards who couldnt catch a Seinfeld reference if their life depended on it: 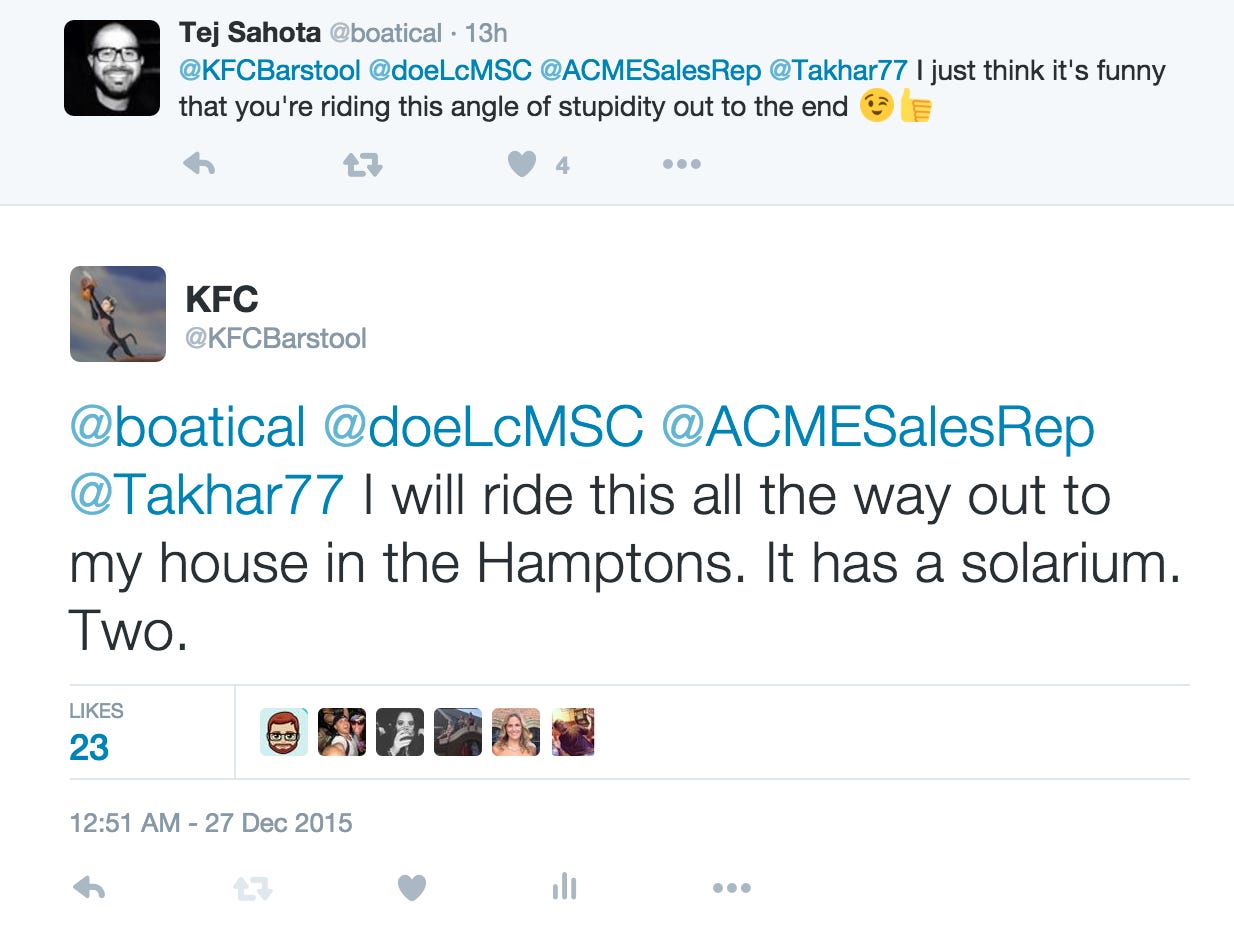 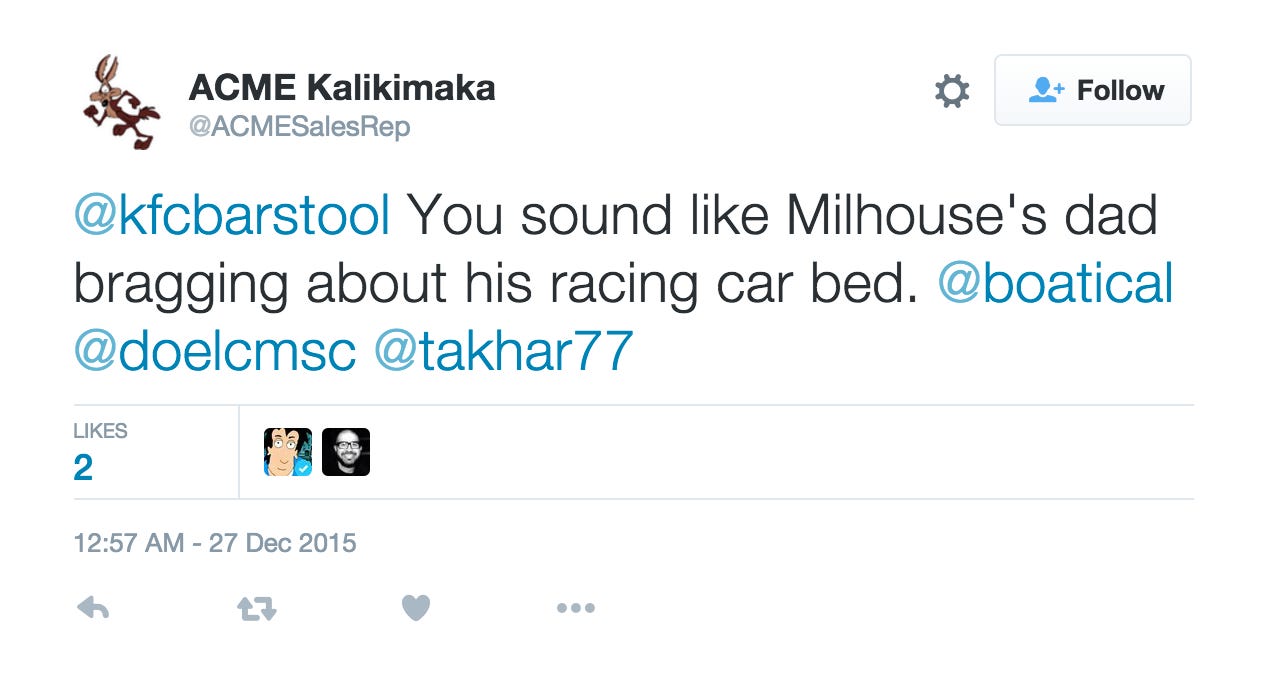 Pretty good rule of thumb – if you dont catch blatant Seinfeld references I am pretty much guaranteed to hate you. These guys thinking I’m being serious about having a house in the Hamptons with 2 solariums perfectly sums up the type of people we’re talking about. Millions of jokes flying over their heads at all times because they take life too serious.

And then of course, what would a Twitter war be if we didnt hear from Buzz Feed: 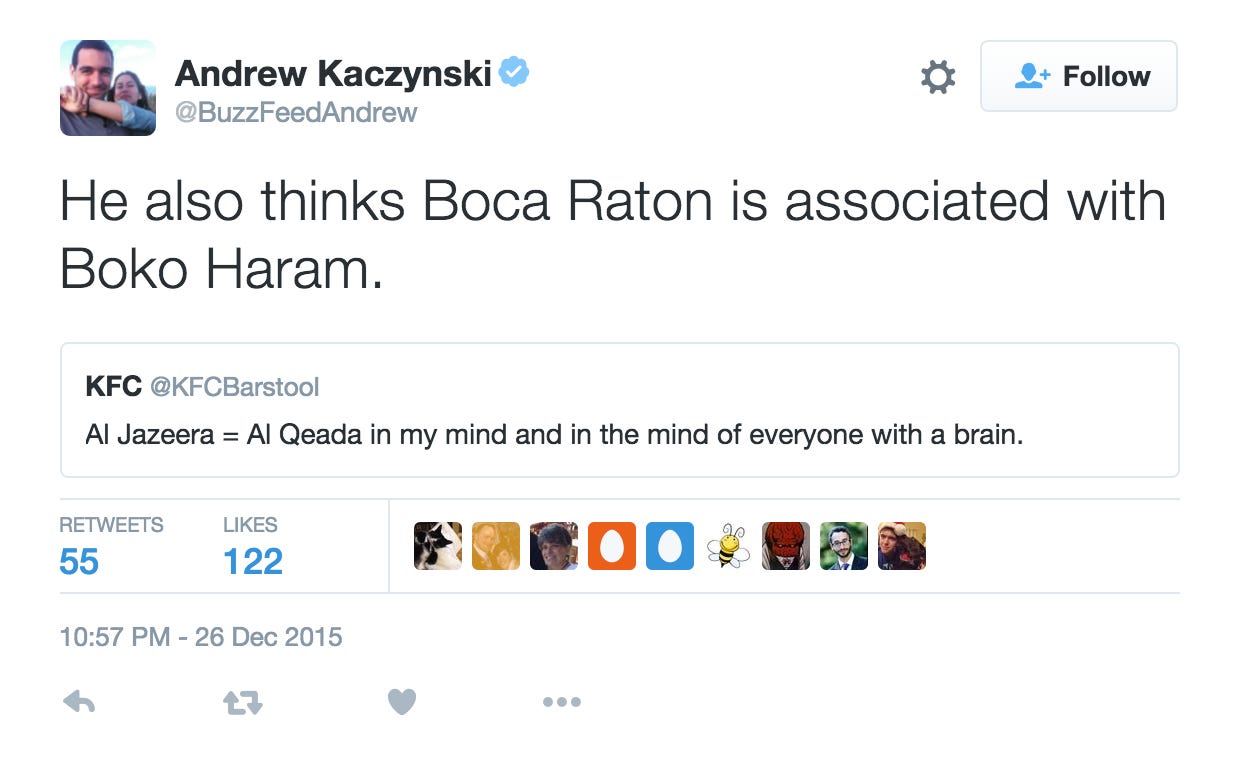 BOKO HAREM BURN! If Andrew was offended by my Al Jazeera takes just wait until we start talking about Al Borland. I dont trust that motherfucker as far as I can throw him. Always in flannel. Never had a girlfriend. Al Borland was a terrorist attack waiting to happen.

The whole timeline was electric with Social Justice Warriors if you want to read hours and hours of absolutely ridiculous outrage over clowning around about a news network.

And that at the end of everything, it turned out the Al Jazeera report wasn’t even credible.

Which was just perfect. Almost Portnoy-esque luck that this story turned out to be bogus after these nerds carried the Al Jazeera Cross all night. Sometimes the Pirate Ship experiences such incredible internet serendipity is just astounding.

And so now I think I have to hate Al Jazeera forever. Its almost like the Blindos. I didn’t really care about blind people either until I found myself in a Twitter Beef with them. Same applies for Al Jazeera and the apparent DIEHARD fans of the news network. I just have to hate them now. I might even have to fuck around and vote for Trump.