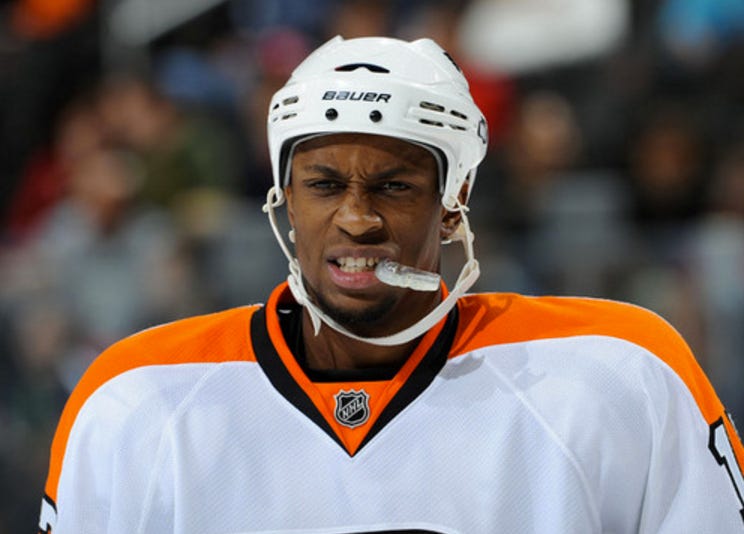 There have been rumors speculating a trade involving Wayne Simmonds and the Montreal Canadiens for weeks now. Probably even months really but they’ve just started to pick up a little more steam over the past week after a “report” went out saying the Flyers and Habs had agreed on a deal but had to pull out of the trade due to the roster freeze over Christmas. Now before we get too deep into this, let me just say right now that I’m pretty sure these rumors are all bullshit and there’s nothing to them. However, I’m a big believer that where there’s smoke, there’s fire and there’s a shit ton of smoke around this one.

Now the thing here is that this trade would make very little to no sense from the Flyers’ perspective. The Canadiens are at a point in their season right now where they need a shake up. They have lost 6 in a row, they lost their lead in the east, and they are all sorts of out of whack. Bringing in a player like Wayne Simmonds to their top 6 immediately makes them a favorite again in the Eastern conference. So the Flyers have all the leverage in the world if they were ever to actually be talking with the Montreal Canadiens. Not only that, but Wayne Simmonds is also the type of player who you have to overpay for. He may skate like he’s running in the parking lot with his skates on. He may fill up his gloves with cement before every game. But he plays a gritty game and would be welcomed into the top 6 of almost any team in the NHL right now. He’s also on a VERY cap friendly contract right now at $3.975 AAV through 2019. So not only do the Flyers have the leverage, but we’re dealing with the type of player who you’d have to overpay for anyway…. and the Montreal Canadiens have pretty much nothing to offer in return.

The best prospect the Canadiens have in their system right now is 6’6″ 235 lb right wing Michael McCarron. He’s a good ol’ American boy playing in the AHL for St. John’s right now and was the Canadiens 1st round pick in 2013. Any deal involving Simmonds would almost certainly have to include the Canadiens’ top prospect in the package and I’m not sure if Montreal would be willing to give that up or not. But from there, Montreal doesn’t really have much else to offer. They could give up another mid-level D prospect and a pick? But that’s pretty much it and I think that if this team is going to move Wayne Simmonds, they could get more in return for him if they look elsewhere. I know that Simmonds shouldn’t earn a Tyler Seguin package in return. I realize that this is extremely over-valuing Wayne Simmonds but as I already said twice before, the way he’s been playing this year has made him the type of player that you need to overpay for.

I’m not totally opposed to trading Wayne Simmonds all together, however. I think that if the price is right, the Flyers should seriously consider it as an option. This team is still 3 years away from coming together completely and by that point I don’t think he’ll be contributing quite as much as Giroux, Voracek, Coots and Konecny will be. So with the price for Wayne Simmonds about as high as it could possibly get right now, it’s not the worst decision in the world to explore a trade. I love Wayne Train to death and the way he plays the game fits this city perfectly. I’d hate to see him leave but this is a business most importantly. I just don’t think that we end up seeing Wayne Simmonds wearing a Canadiens sweater at any point this year. Hextall is too savvy for that.

P.S – been seeing a lot of people talking about the Flyers packaging Vinny Lecavalier in with a trade for Wayne Simmonds to get that roster off the books. And let me just be clear with you for a moment here…. there is no general manager in the NHL that is as incompetent at their job as Paul Holmgren was. Nobody is going to be trading for Vincent Lecavalier. Nobody. Now let’s all think happy thoughts and hope I’m not completely wrong about this entire thing.

TL;DR – Wayne Simmonds isn’t getting traded to the Montreal Canadiens. Now go enjoy the rest of your Sunday in this shitty fucking sports city.