Merry Christmas errrybody! The bad news is that there ain’t shit to do today other than watch professional basketball – no thanks – while enduring umpteen “How are you doing? Liking your job? Got a girlfriend?” conversations with your alcoholic aunt Anne and/or creepy cousin Calvin. It sucks but that’s life. Now for the good news: there’s a full slate of glorious Boxing Day soccer for your eyeballs to feast upon starting bright and early tomorrow and running into the middle of the afternoon.

Before we get to the soccer though I have a sneaking suspicion that this post, by dint of being one of the few blogs to go live today, is likely to attract an unusually large amount of attention from the “soccers gey” mouthbreathing contingent in our midst. Hello friends! One of life’s great mysteries is why the mere topic of soccer gets your little tighty whiteys in such a bunch. Maybe (probably) some lawn fairy somewhere stole some girl from you at some point. 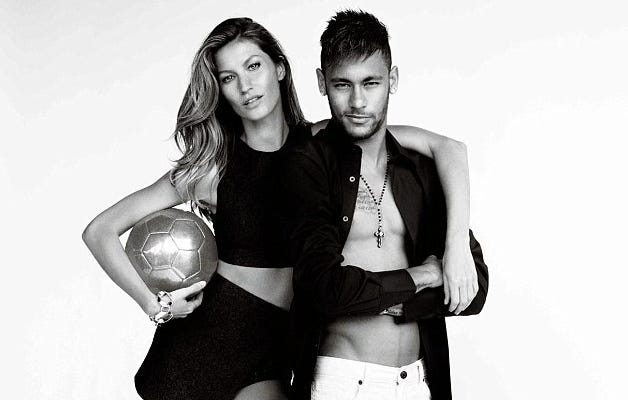 Happens to the best of you

But whatever your beef is with the beautiful game – whatever your deep-seated insecurities are, just know that if or more likely when you finally see the light and decide to embrace the sport of the gods, Uncle Jurgen will be there to hug all those years of soccer-hating pain away. 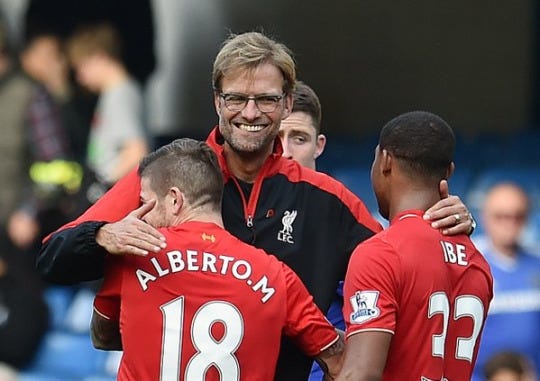 Now back to the soccer, and specifically the list of things that I asked Santa for this year (which, hint, is pretty much the same list that I ask for every year): 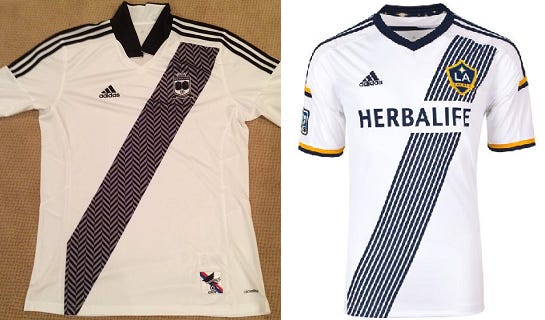 Alas, the first three are preposterous, but more importantly if you considered asking for a MIB jersey – let alone thought I did – then you need to take a long fucking lap and think about where your life went wrong. My eye starts twitching anytime I think about the sheer lunacy of that jersey being a thing. In fact, let’s just move on. 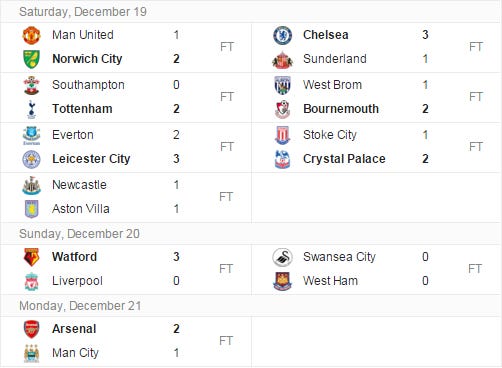 There are a ridiculous number interesting storylines that emerged from last week’s games, some of which include…

– Leicester’s win last weekend was, to little old me anyway, their most impressive performance of the season. Everton is a solid team in fine form and was playing at home, and the Foxes came in and ate their lunch. The real question now is where they go from here: keep all their players (perhaps even mortgage the farm and buy another) and go for the glory of a Champions League spot… or sell players like Jamie Vardy, Riyad Mahrez or N’Golo Kante for as much as possible and re-invest the money in establishing their presence in the EPL for years to come. (Editor’s note: right answer to this question is coming in next post.)

– As impressive as Leicester was last weekend, flip that and reverse it and that was United. Norwich at Old Trafford? Show some spine, homeys. More interesting than the game itself though was the fallout, highlighted by Louis Van Gaal’s temper tantrum.

For those of you not wanting to sit through the pre-vid commercial (don’t blame you), I’ll save you some time. Here’s LVG’s opening line:

“Has anybody in this room not a feeling to apologise to me? That’s what I am wondering. I think I was already sacked I have read. Or have been sacked. Or that my colleague was here already.”

Essentially, in his Hooked on Phonics Didn’t Work for Me brand of English, LVG demanded an apology from the media for speculating that he might get fired now that United has: (1) won zero of the last six games, (2) gotten bounced from the Champions League, (3) scored roughly two goals in the last month, (4) and “accomplished” all this while playing a disgustingly pessimistic brand of soccer. 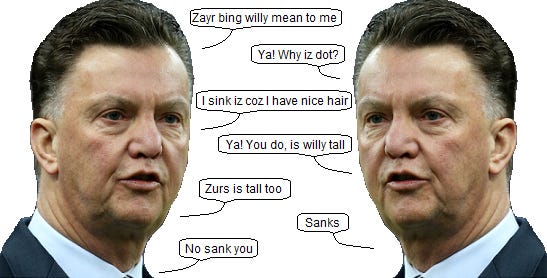 The long and the short of it is that if you like LVG, the press conference was a commendable display of defiance, where if you think his geniusness is exaggerated he sounded like a petulant whiney baby. Either way, the pressure is apparently getting to him… which is not a harbinger of good things, though I’d still be very surprised if the club decides to go in a different direction.

– Chelsea’s win was the definition of a dead cat bounce. Still a longgggg ways to go to achieve “respectability”.

– Don’t look now but Watford is legit. Winning 3-0 at Anfield is no fluke. Behind Leicester, I’m most interested to see how this club handles the January transfer window.

– As for Liverpool, Rodgers got fired after starting the season with a record of (3-W; 3-D; 2-L). Since taking over in October, Klopp’s record is (3-W; 3-D; 3-L). The latter is doing it with players that the former brought in, which means Klopp is essentially playing with house money, but interesting nonetheless.

– “But can you do it on a cold, rainy night in Stoke?” For Crystal Palace the answer is a apparently yes (even if it was during the daytime), which will likely be a big differentiator between these two lower top-half clubs come May.

– Nice win for Arsenal. I love to give Olivier Giroud shit for being French, for having a gigantic nose, and for wasting way too many great chances… but even I have a tough time arguing with his recent goal scoring record.

– Also, if there was still a question, this game confirmed that City’s defense without Vincent Kompany is officially a joke. 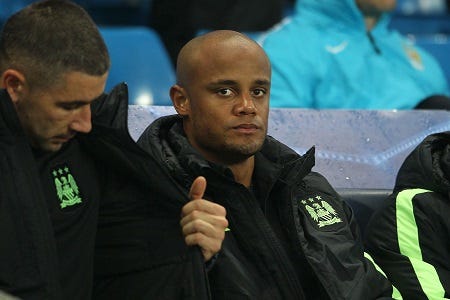 We are one game away from being halfway through the season and this is how we stand (with a bonus look at where we were at the same point 12 months ago): 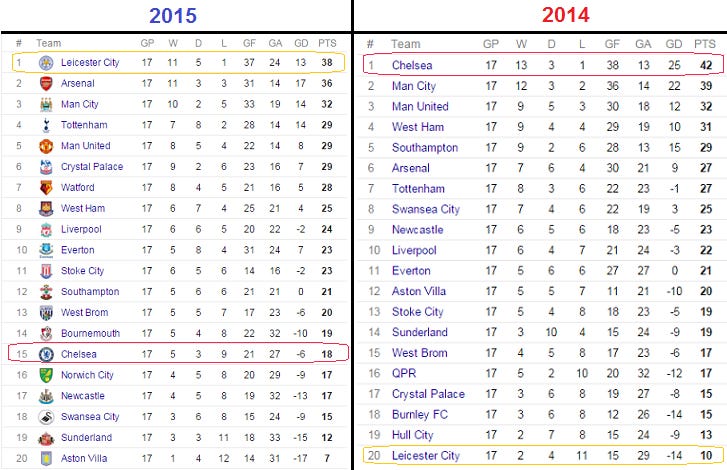 As for the games coming up tomorrow (or later today, depending on your present location), here’s what we got… 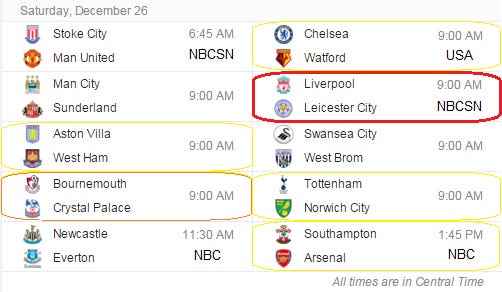 Apologies for getting this out so late. Too many damn family obligations. But due to (1) recent United games being borderline unwatchable and (2) the belatedness of this post, I’m skipping the 6:45am CT game and going heavy on the 9am CT games to hopefully give you enough time to get in touch with your bookie and follow – or better yet fade – all my picks tomorrow morning.

The Foxes are damn good. Way better than I gave them credit for in August. Word of advice though: buy low and sell high. I missed out on the first half of that equation this fall, and my bank account has dwindled accordingly, but I’m ready to make up for it on the inevitable second half. Here’s the thing though: Liverpool is going to be without Martin Skrtel and possibly Dejan Lovren (yay?), meaning the club may have to make do with Kolo Toure and Mamadou Sakho in the center of defense. That is NOT the recipe for hanging with a team as hot as Leicester. That said, I am willing to give Klopp the benefit of the doubt that he’ll play a tactically conservative XI tomorrow that is designed to both press up and track back without getting overly stretched (to help cover for their soft underbelly at CB)… so I can’t help but think they will make this an uglier game than Leciester is used to. In the end, I think the Reds will find a way to hang with those feisty Foxes. Gimme a 1-1 draw. 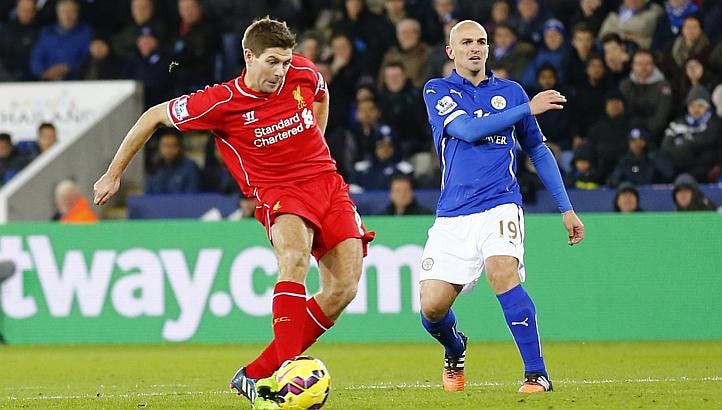 The Cherries have pulled off some nice wins lately, which has done two things: 1) upped their chances of surviving for another year in the Premier League and 2) significantly increased the amount of money we ‘bout to win by betting on a much better team. Crystal Palace to win 2-1. 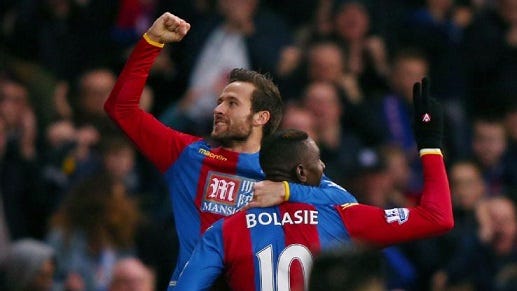 • Guys, take a deep breath. Remember when I said Watford was legit? What If I told you that their odds are [+650] to beat the club in 15th place? Yes, the game is at Chelsea [-205] and yes the hosts have more talent and yes it’s a small longshot… but a small longshot for those odds? GIMME THAT ALL DAY. Watford to win 2-1.

• I must be taking crazy pills because the bookies apparently think Aston Villa [+160] is the favorite to win a game. Get. The. Fuck. Out. Don’t care who their opponents are, I’m taking them. West Ham to win 2-0. 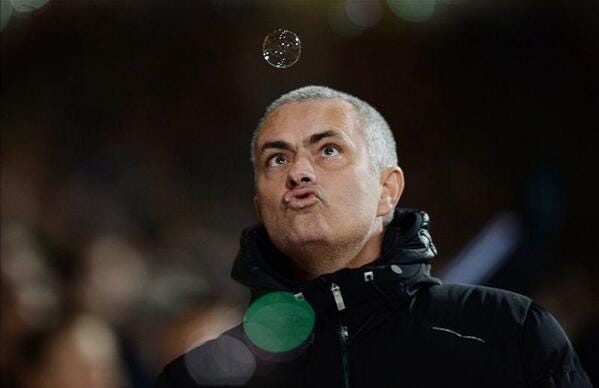 • Theory: Tottenham’s loss to Newcastle two weekends ago was an anomaly. Time to test that theory. Norwich is coming off their biggest win in years, but are about to get murdered. Spurs to win 4-1.

• Southampton laid yet another egg last weekend at home against Spurs, which (for those counting at home) means that they have underperformed in six straight games, including a 1-3 loss to City, a 1-6 murderfest to Liverpool and a 1-1 draw with Villa… part of me thinks this is the game the Saints snap out of it, but the problem is that even if they do, Arsenal [+105] is still probably too good for them to win. Lexi Sanchez is a big loss but the club showed against City last weekend that is still has more than enough to make up for his absence (assuming Giroud doesn’t revert to old school Giroud). Arsenal to win 2-1.

Other leagues don’t play because they are lazy af.

So there you have it: the best weekly soccer preview that Barstool will ever publish today. Another post coming on either Sunday or Monday for the second set of three games that will be played over the course of the next week… can’t wait.