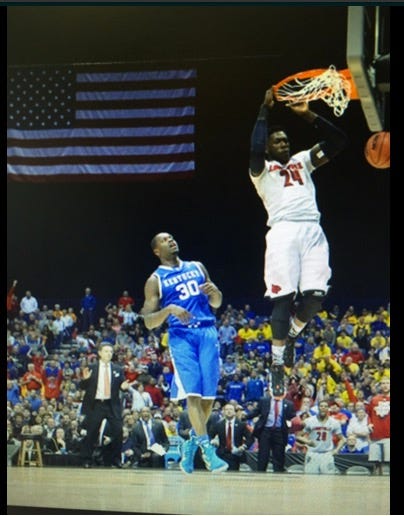 After a Saturday-esque slate of games on Tuesday, we’re stuck back to almost nothing with college hoops thanks to Christmas. However, we do receive a gift of the best nonconference rivalry in all of college basketball on Saturday in Kentucky vs Louisville.

Depending who you ask it’s the best rivalry in the entire sport or right behind North Carolina – Duke. Before we get into the preview of the game (since there aren’t really any other games of note, except for the best team in the country in Oklahoma playing in the Diamondhead Classic out in Hawaii,) we’ll take a look at some of the highlights of this rivalry.

First off, don’t let the massive exposure ESPN gives the ACC powerhouses fuck with your brain. They love to promote the shit out of the games between Carolina-Duke since Kentucky-Louisville is on CBS. Then there’s Rick Pitino. I mean, this guy built the Kentucky program back from the lowest of lows, won a title, lost in the title game then bolted for the Boston fucking Celtics. Where does he return? Of course at Louisville where he did the same for the Cardinals, making them a big time program again.

While Carolina-Duke is a great rivalry, it’s more of a cheese and wine crowd in Carolina. I can’t imagine a Carolina-Duke fan getting into a fistfight at a dialysis center because a Louisville fan just so happened to think the Cards will win.

So, while there is a law in place for these two teams to play every year since 1983, let’s take a look at this game.

Kentucky has crashed back to life after last year’s once-in-a-lifetime season. After jumping out to a No. 1 ranking and impressive dominating win over Duke, the Cats have lost to UCLA and Ohio State. Tyler Ulis continues to struggle shooting the ball while Skal Labissiere, the expected No. 1 or No. 2 pick in the NBA Draft has all but disappeared.

Kentucky did add depth over the week with Tai Wynyard becoming eligibile right before the Ohio State game. He’s another massive body that can add depth to the frontcourt, as he’s a 6’10”, 255 pound freshman.

Louisville on the other hand just lost some depth with Mangok Mathiang suffering a broken foot. Louisville still does have Damion Lee though, who is one of the best players in the country people don’t talk about enough. Pitino’s team is doing typical Pitino stuff in terms of pressing, playing physical and trying to beat the shit out of people.

However, Louisville hasn’t beaten anyone yet. They looked good against Michigan State, the only opponent worth a damn Louisville has played, but that was still a loss. This game being at Rupp Arena, a place where Calipari has only lost 4 games since he took over the Kentucky program is huge for this team right now.

So, on Saturday at noon, turn on CBS. Then sit back and watch two teams who desperately need a win go at it, with two coaches who hate each other. Kentucky wins by eight.