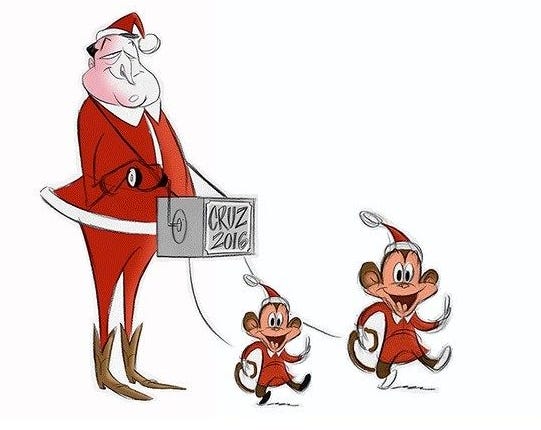 NBC News - Sen. Ted Cruz launched an “emergency” appeal seeking to raise $1 million in 24 hours in response to a Washington Post online editorial cartoon depicting his two young daughters as dancing monkeys. The Republican presidential candidate also criticized the paper for its “tasteless attack” on his children. “My daughters are not FAIR GAME,” he wrote in a fundraising email sent late Tuesday. “I’m sickened … I knew I’d be facing attacks from day one of my campaign, but I never expected anything like this.” “This is an emergency — all hands on deck,” his fundraising letter added. “Click here to make an instant, emergency contribution and help me fight back.”

Man, the life of a politician. So mad, so angry, no other option but to raise a million dollars in 24 hours. That’ll show the Washington Post who’s boss! What a way to show your anger and frustration, beg for an “emergency contribution” to fight back against a cartoon. I got into the wrong game, the politics game is where it’s at. I can’t believe he’s trying to spin the Washington Post using his daughters in a cartoon into whoring out the fact the Washington Post used his daughters to raise a million bucks. I don’t want anyone to see this cartoon! It’s despicable and nobody should see my daughters depicted as monkeys! (Unless I use it to fundraise, of course.) 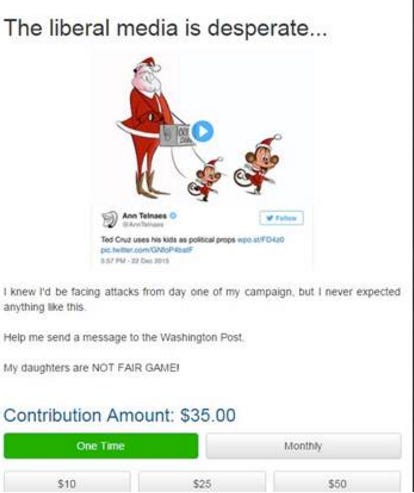 The animation by Pulitzer Prize-winning cartoonist Ann Telnaes sparked immediate controversy and was later taken down by the Post. The cartoon — which portrayed Cruz in a Santa outfit with an organ-grinder and daughters Catherine, 4, and Caroline, 7, as monkeys — was replaced by a note from editorial page editor Fred Hiatt, explaining that it had generally been the Post’s policy “to leave children out of it.” Telnaes was herself unapologetic, posting a link on Twitter to a parody campaign ad released by Cruz’s campaign which showed him reading Christmas stories to his daughters with titles such as “How Obamacare Stole Christmas” and “Rudolph the Underemployed Reindeer.” That ad aired during the most recent episode “Saturday Night Live.”

Props to the cartoonist for not apologizing. She’s like if you are going to parade your kids around, I can depict them as monkeys. Cruz can’t really demand his children to be left out of it when he’s shoving them in everyone’s face every 3 seconds. But it’s working for him, as this cartoon is the best thing to ever happen to him.