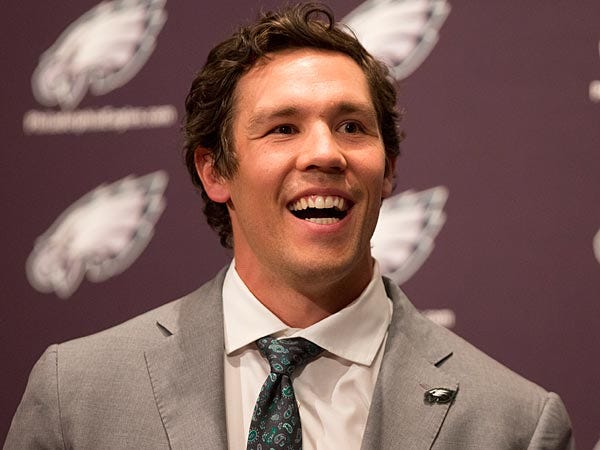 It’s simple. It’s fair. It’s American. I’ve been a Bradford defender from the start and FINALLY the city seems to be coming around on his side. This dude can ball. He’s accurate, tough, and a leader. But still, we don’t know exactly if Sam Bradford is a franchise QB, a winning fit for Chip’s system, or if he can go a full season without shattering. He’s going to need a new contract from someone next year, and obviously wants a long term deal worth megabucks. I’d be VERY apprehensive to sign him to that. We simply don’t know what we have, yet. However, Sammy’s made significant improvements and letting him walk could be an even greater disaster. The best solution is to slap the franchise tag on his handsome(?) ass and call it a 2016 season. That way A) We’ll definitely know what we got by the end of the year, B) We can still bring in a Colin Kaepernick, RGIII, or Tyrod Taylor (not likely) to test run without hurting Bradford’s feelings, and 3) Maybe draft and develop a QB that could be a prototypical “Chip Guy”.

Now let’s see what it’ll cost to franchise the sleeves and…shit on a stick. Thanks to Russell Wilson’s billion dollar deal on the heels of concussion water and virginity, the franchise tag for QB’s is supposed to skyrocket from $18 mill to around $25 mill in 2016. That’s not slim pickings, but the Eagles still should find a way to get it done. Why? Because it’s a short term solution to a long term problem and they should have the cap space to make it happen.

Now I’m no real Adam Smith with economics. JK Simmons said it best in Whiplash that if you give a calculator to a retard he’ll try to turn on the TV with it. I think I fall in that category, but we’ll try to break down the numbers as best as possible. Bradford is making $12 mill right now. He’ll most likely be searching for a long-term deal in the ballpark of $16-18 per year. Does he deserve that much? Probably not. But he’ll most likely get it based on his improvements this year and still unknown potential. Shit, they can cut DeMarco and save $7 mill next year right there (it’d be stupid cause he’d go right back to dem Boyz and we’d still have $8 mill in dead money owed to him, GM Chip doing work!). All I’m saying is it’s a guarantee Chip will be around for at least one more year and QB is the most important position in sports. If we have to bite the bullet one more year to see if this guy is either Brees or bust, it’s worth it. At least after next year we will 100% know what we got. If he does well then nobody will have an issue signing him for the big bucks and if he doesn’t then no harm no foul – Cut the man loose. And that’s a lot better than this offseason either A) Giving him a long-term deal and all of a sudden his knees explode out of excitement or 2) Have him sign onto another team where he fulfills his Heisman winning, 1st pick overall potential. Just imagine what this guy can do without getting decked every damn play and WR’s that can actually catch.

Bottom line is Bradford, and us, deserve at least one more year to show if this is the beginning of a beautiful relationship. Franchise The Sleeves. CUE THE PRESEASON HIGHLIGHTS (seriously though this guy has been making big boy throws all year and only has gotten better).