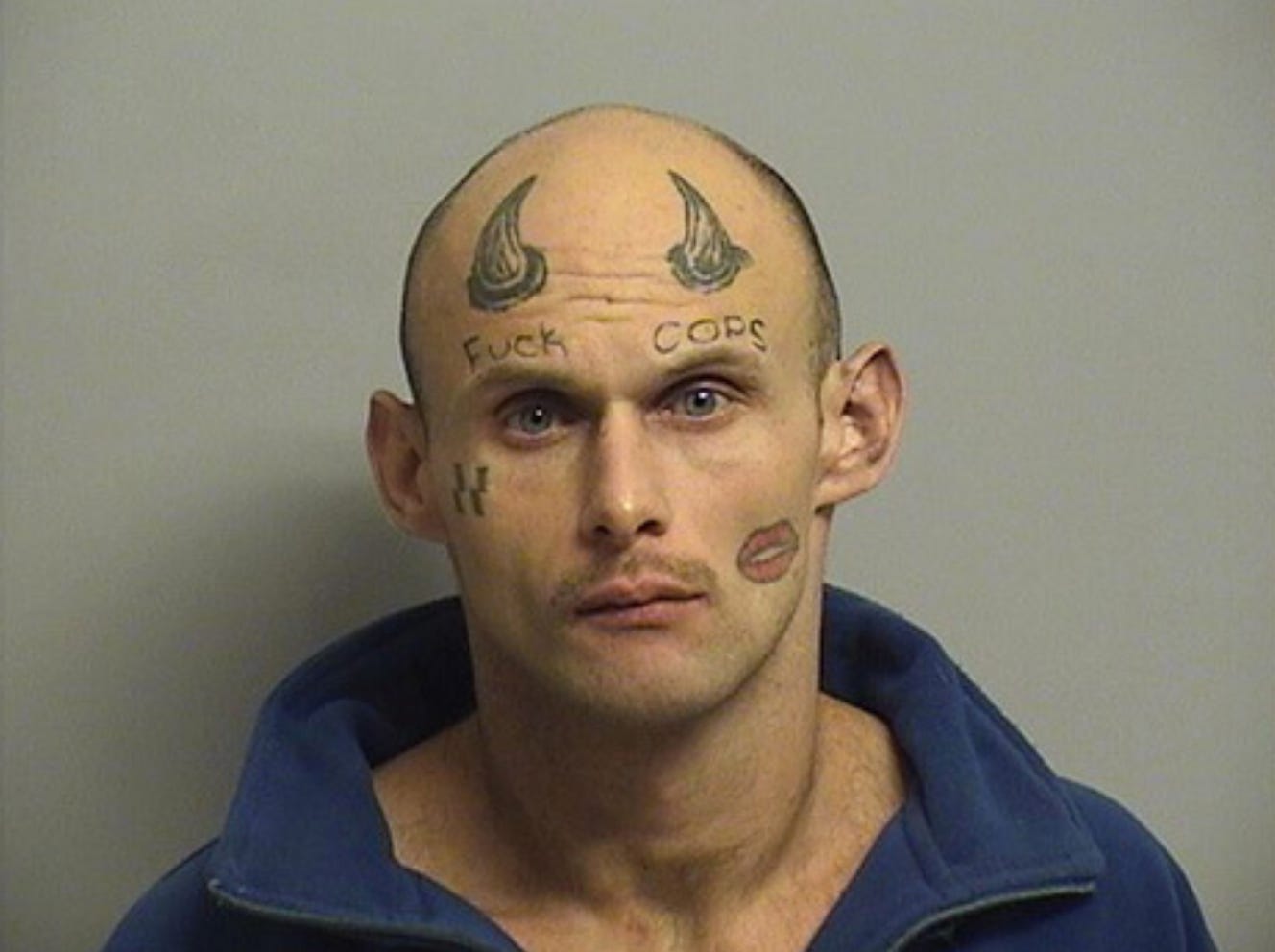 The Smoking Gun- Meet Paul Terry. The 26-year-old Oklahoman and a female acquaintance were arrested Saturday night and charged with robbing a man the prior afternoon. According to cops, Terry and Sonja Moro, 29, robbed Moro’s ex-boyfriend inside the victim’s Tulsa home. The man told investigators that he thought the male robber’s name was Terry, adding that the suspect had identifiable tattoos on his face. As seen in the above mug shot, along with devil’s horns on his forehead, Terry has “FUCK COPS” inked over his eyebrows. Terry, who has a prior felony conviction, is locked up in the county jail in lieu of $100,000 bond. Moro is being held on $50,000 bond for armed robbery, the same count for which Terry has been charged.

Paul Terry: I’m ready for another tattoo.  It’s time.  I’ve already got the Devil horns to let people know I’m a badass.  Then I’ve got the lips on my cheek to let the ladies know I’m a sweetheart and that I’m sexually available.  Now I want something that really pops and shows off my personally.

Tattoo artist: How about your last name in cursive somewhere? Or your family crest?  Or an inspirational quote on the small of your back?

Paul Terry: No I’m thinking more along the lines of “FUCK COPS” above my eyebrows.

And so it was done. Nothing says, “I never want a job again” like putting FUCK COPS above your eyebrows.  There are only a handful of people who can pull off a tattoo like that and still lead a semi-normal life. Successful rappers annnnnnnnnnd that’s the end of the list. Any other person gets a tattoo like that and they’ve just given up on life.  It’s especially curious for a guy who leads a life of crime.  I never understood that.  Criminals getting tattoos makes no sense.  “Hey put this permanent ink on my body that makes me easy to identify.” So stupid. FUCK COPS might be the stupidest one yet. But hey, do you Paul Terry. Do you. One of these days you’re gonna run into the wrong cop on the wrong day.